Contribute Today
By Katerina Azarova
May 15, 2014

The holidays are over, ladies and gentlemen — hopefully, you've had a chance to relax, kick back, maybe even go on a brief vacation and generally recharge. You're going to need all the energy you can muster, as spring is in full swing and there are exciting things happening in our fair capital every day. And it also means that the concert season is really kicking off: This weekend is the perfect example of a great lineup, so listen up and get ready to have some fun!

Friday night has got a little something for everyone: you could head on over to Space Moscow and enjoy a night of techno with DJs from Britain and Slovenia, or you can go for some hip-hop and electro beats, courtesy of Tokimonsta from Los Angeles, at the Manifest club. There is a night of drum 'n' bass at Megapolis club, brought to you by Hucci and Stooki Sound from Britain, and big beat at the 16 Tons club.

But if you are not really into the club scene, then go check out White Lies at Ray Just Arena. They are an English post-punk band that formed back in 2007 and quickly achieved critical acclaim. Their first album, called "To Lose My Life," debuted at No. 1 in the British albums charts, and they have since released two more. Critics call them "dark yet uplifting" and frequently compare them to bands like Joy Division, Editors and Interpol.

White Lies are on tour in support of "Big TV," their most recent album, released last year. If you missed them last summer when then took part in the Park Live festival, this is your chance. Plus, the guys sound much better in a closed concert environment than at an open-air gig, so it's bound to be a great show. The band takes to the stage at 9 p.m., and tickets start at 1,600 rubles.

Saturday … well, I have just two words for you: Justin Timberlake. The new king of pop is making his debut appearance in Russia, and he's only in town for one night. Don't miss your chance to see him perform because perform he can, like no other. 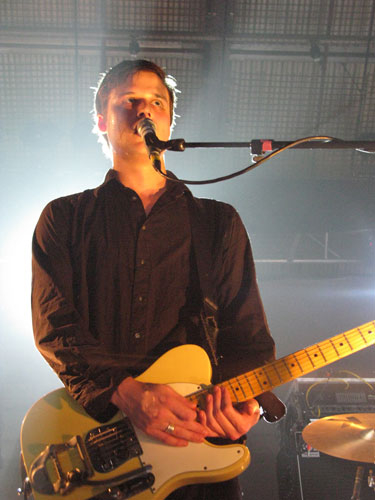 The Grammy and Emmy-award winning musician, whose latest album has already sold more than 4 million copies, is bringing his hugely successful 20/20 show to the Olimpiiski Arena, and it has already been pegged as one of the biggest musical events of the year. You can expect Justin to go all out: what with the elaborate show, the band and backup vocals, it's going to be huge. This is Timberlake's first solo tour in six years, and you definitely want to be able to say "I saw him live in Moscow," so if you haven't yet, get your tickets right now — they've been on sale for months and very few remain available. The show starts at 8 p.m. this Saturday, May 17. You might want to get there a bit early, because the queues are going to be long and you don't want to miss anything!

And if the hectic city life and its issues have finally gotten to you, you might want to set aside Sunday evening for Deva Premal and let her take you away with her unique take on sound. Deva, a German-born musician, takes ancient Sanskrit texts and mantras and puts them into atmospheric New Age settings. Best known for her top-selling chant CDs, Deva is a classically trained musician, who grew up singing mantras in a German home permeated with Eastern spirituality. Her albums have topped the New Age charts throughout the world since her first release, "The Essence," back in 1998, and she's performed for the Dalai Lama. So if that sounds good to you then go check her out at Crocus City Hall on Sunday. Deva Premal takes to the stage at 7 p.m. and tickets start at 1,000 rubles. Which, arguably, is a small price to pay for inner peace.

As you can see, it's a pretty big weekend in terms of live shows and that's going to be the case for most weekends as we head towards the summer concert season. And whether you choose to go see a live gig or just have a picnic in the park, just remember to enjoy the sunshine and have a great time!