Brooklyn-based musician and minimalist composer Jozef van Wissem, the winner of last year's Soundtrack Award at Cannes who will play for Moscow audiences on May 17, has always been an oddity in the circles he has played in. A towering figure always dressed in black, he looks more like a heavy metal guitarist, and while surrounding himself with avant-garde musicians, he wields a medieval lute as his instrument of choice.

A master of the lute, an instrument popular in the Renaissance and baroque periods, van Wissem has managed to make an old-fashioned instrument sound very contemporary, even adopting innovative approaches like palindromic structures in his compositions. On stage, he mixes compositions by Robert de Visse, a 17th-century lutenist who played in the court of French kings Louis XIV and Louis XV, with performances on 12-string electric guitar and electronics.

On his first lute record in 2000, "Retrograde Renaissance Lute: A Classical Deconstruction," he played the scores backward. "I felt I had to personalize the lute repertoire to make it my own. The Renaissance pieces all end resolved, which I think is boring," van Wissem explains.

"Later I started to quote baroque lute themes in my compositions and play them backwards creating mirror images as palindromes, sort of medieval sampling in a way. I am still into repetition of a few chords. That is more interesting than playing 100 single notes," he continued.

This approach to the instrument and to music composition is perhaps why van Wissem is often seen sharing the stage with avant-garde and experimental musicians, even though he comes from a classical music background. At age 16, he was already juggling duties playing Vivaldi pieces on classical guitar with the Limburg Symphony Orchestra and guitar in punk band Mort Subite.

Born in Maastricht, the Netherlands, van Wissem owned a music bar and played electric guitar in an experimental group but packed up and moved to New York in the early 1990s after receiving an invitation from an American producer to go there. "I got sick of the rock and roll lifestyle," he said, and began a period of introspection, returning to the acoustic guitar.

It was then that he chanced upon an ad in The Village Voice from a lute teacher and thus began his lute studies. He tells me that the instrument was not unfamiliar, as he had been interested in the instrument from an early age, beginning with playing lute pieces during classical guitar lessons he took at age 11 from a book called "Music from Shakespeare's Time." 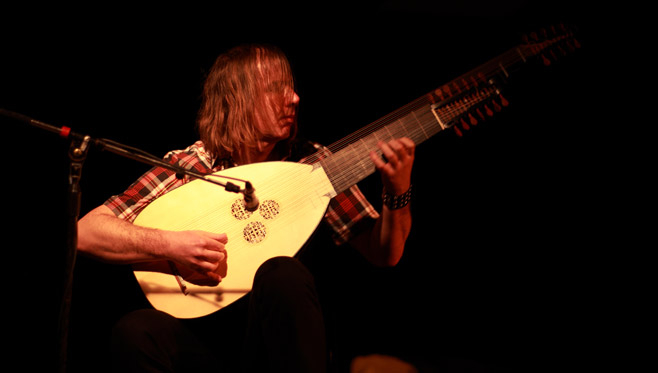 Van Wissem won the Soundtrack Award in 2013 at the Cannes Film Festival for his score to "Only Lovers Left Alive," a "crypto-vampire love story" starring Tilda Swinton and Tom Hiddleston currently screening in Russian cinemas. He taught Hiddleston how to play the lute on set, and tells me that at the after-party in Cannes, Hiddleston said he had based the role partly on him.

"His lute was essential. His music was inspiring even when I was writing early versions of this story. But the lute became very inspiring for several reasons. One, his approach has a kind of minimalism to it that is very strong and not intended to show off technique, but to employ the technique for result," Jim Jarmusch, the film's director, said about van Wissem in an interview with Spin magazine.

Van Wissen and Jarmusch go back a long way since a chance meeting on the street in 2006, where he passed the director some of his recordings. They soon developed a close friendship over drinking green tea at the Pink Pony cafe in the East Village and had many conversations about lutes, William Blake and 18th-century Christian mystic Emanuel Swedenborg, best known for "Heaven and Hell," his book on the afterlife, he recalls.

The two have since released three albums as a duo, their most recent being "The Mystery of Heaven," released on Sacred Bones Records in 2012.

"As a friend I think I sort of created a way for him to become a true musician again after all these years. It's an identity you know, you can't fake it," he said about their relationship, admitting that he prefers the company of visual artists to musicians.

"The musician's vocabulary is very limited, they only talk about their next show or about food. I learn more from visual artists or filmmakers. I love their methodical approach."