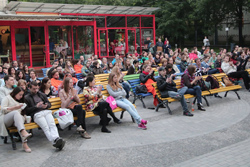 A touch of class

Moscow's Bauman Garden boasts one of the most charming open-air cinemas in the city. The outdoor "shell" stage will transform into a cinema every Friday this summer and comedy is the genre of choice. Visitors can watch the best contemporary Russian comedy and learn more about the filming process through talks from film professionals. The initiative is part of the 2016 Year of Russian Cinema and is aimed at encouraging members of the public to become involved in filming themselves. This might not be one for non-Russian speakers as almost all films will be shown in Russian — but then again, the language of humor is remarkably universal. And even if it isn't, at least you won't be out of pocket as screenings are free to members of the public. 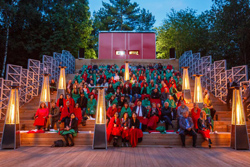 Subtitled films in a slick setting

The summer cinema in Solkolniki Park is the second open-air venture of Pioner, a cinema and culture center near Kievsky Station. Pioner offers a well-polished format with high-quality projection, a preference for subtitles over dubbing and general no-popcorn policy. The cinema at Sokolniki is located on the site of a historic theater from the 1970s, which was completely renovated, although the original projectionist booth has been preserved. Films begin in the early evening. During the day, the venue hosts workshops, concerts and theatrical performances. A children's creative center will run until August, with special classes on subjects like cooking, photography and painting. The cinema is situated on Mitkovskaya Pereulok, near the rose garden and exhibition center. Tickets cost 350 rubles and you can buy them online in advance via the Pioner website. 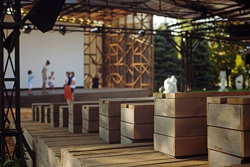 There are worse ways to spend a balmy summer's evening than reclining under the stars in Moscow's most overlooked park. The summer cinema in Park Muzeon has comfortable seats, bright plaid blankets and a supersize screen to ensure you experience a pleasant evening of film viewing. As you'd expect from a park packed with interesting and experimental works of art, Muzeon's program for this summer features a number of independent and arthouse films. And the good news for those with little Russian is that the majority are shown in the original language with subtitles. One of the most exciting events of this summer will be the "Kinozvychka" project, where contemporary musicians have been asked to create their own musical interpretation of six silent Soviet films. Tickets can be bought online for 350 rubles. 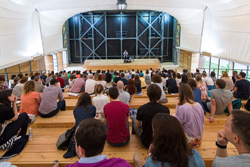 VDNKh's new summer cinema and lecture hall has space for 288 spectators, and, what's more, it features a special roof allowing you to enjoy films come rain or shine. Through September the cinema will screen films twice daily during the week and three times daily on weekends. Alongside blockbusters and a kids animated film program, VDNKh plans to host a series of retrospectives from legendary directors and award-winning films from Europe's best festivals over the summer. The venue's handy website provides a full program of screenings over the coming weeks and offers you the chance to buy tickets online for 350 rubles. It's easy to get lost in VDNKh's spawling complex so, to find the cinema, head down the central boulevard and turn right when you hit the Vostok rocket. A series of English-language lectures will also be hosted at the venue over the summer. See the website for more details. 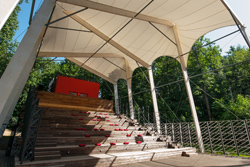 The stylish summer cinema in Fili Park has a retractable roof, meaning you can enjoy the great outdoors without having to worry about any weather extremes. Tiered benches and comfy red cushions make it the ideal place to settle down for a film marathon with a group of friends. There are a wide variety of films being shown this summer, from the old Russian classics to mainstream blockbusters and documentary shorts. As with many of the cinemas, the space transforms into a lecture theater with a full program of events in the daytime. Rumors abound that it also serves as an ad hoc dancefloor ­when Muscovites are feeling particularly upbeat about the summer weather. The downside is that there's no program online, so it's a case of turning up and seeing what's on. The upside? It's completely free. 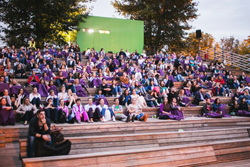 Moscow's original and much-loved summer cinema is located in local favorite Gorky Park. The tiered, bleacher-style seating can prove a little uncomfortable, but free cushions and blankets at the entrance help to keep viewers snug. Like in Sokolniki Park, Pioner runs and organizes Gorky Park's screenings. This is good news for those who enjoy a smorgasbord of cinema, from foreign classics to the latest Russian releases from the country's top directors. This summer Pioner is even hosting Moscow's first Singaporean film festival. Pick up some snacks — and a beer or two — from the adjacent bar and enjoy getting into the communal spirit as you settle down for the evening. The cinema has some 3D showings and tickets cost around 350 rubles.