This weekend the charitable organization Downside Up, which helps children with Down syndrome and their families, raised money and awareness for the cause with a cycling event through Moscow and Kaluga region. The 20th event of its kind saw 100 participants cycle 100km in Kaluga region on Saturday and more than 600 take to the streets of Moscow on Sunday, which were specially closed off for the event. The Moscow leg of the event began on Luzhnetskaya Naberezhnaya and went past the Christ the Savior Cathedral and the walls of the Kremlin before winding its way up through the city and finishing at the southern entrance of VDNKh. There the celebrations continued with a concert presented by Radio 7 host Eva Korsakova and featuring performers from the Russian State Circus.

Since its foundation in 1997, Downside Up has helped nearly 4,500 families with children with Down syndrome, and continually works hard with events such as these to create greater awareness. Even in the late 1990s, most Russians knew very little about the syndrome, and would have known even less what to do had their child been born with Down's, particularly when doctors' advice merely consisted of the need to give up their child and put them into care. With the help of charities such as Downside Up, opinions have improved, but Russia is still not quite there yet.

Denise Roza, the head of Perspektiva and Best Buddies Russia, two organizations which support and advocate for people with intellectual disabilities, spoke to The Moscow Times via email. "There are still stereotypes about people with Down syndrome because they are not sufficiently included in all aspects of our lives — from mainstream schools to the workplace to recreation. This is changing, but we still need years of programs that focus on including children and young adults with Down syndrome into all aspects of the community, including supporting families to do this. Downside Up has made an enormous contribution to improving the situation in Moscow and other parts of Russia for children with Down syndrome and their families."

For the families at the cycling event this weekend, it was clear how much they had been helped by Downside Up and how grateful they were for its existence. Denis Bulgakov, whose 5 year-old son, Vasily, has Down syndrome, has participated in the event for the past 5 years, and spoke to The Moscow Times after the event at VDNKh. "People say that the government does absolutely nothing to help us. I don't entirely agree, as it often depends on where you live, but in general families like us rely on charities like Downside Up. In Soviet times, and even today, it was easier and of course cheaper to put disabled children into care. How can that help development? Children need to be around other children and learn to play and communicate. Look at the children running about here — they're not scared of anyone." 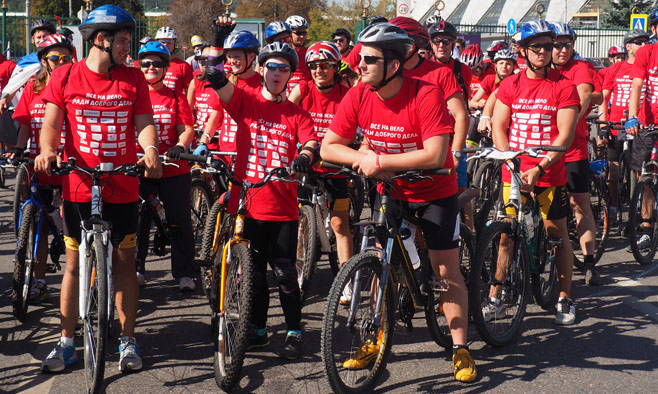 The children did look confident, outgoing and self-assured for their age. And judging by one young Russian man with Down syndrome, who was just back from a world congress in India where he chatted with other participants in English, young people don't see why they should be side-lined in life. Denise Roza also comments that "people with Down syndrome used to be invisible, they lived for the most part in residential institutions and were deemed uneducable. Despite all the problems, public opinion has changed significantly over the past 10 years. Years ago you never saw positive images of people with Down syndrome in the media, but now we do."

These positive ideas have evidently filtered down to the wider Russian population. Vitaly Milokhov, a participant in Moscow's cycle ride on Sunday, came to the event dressed as Santa Claus and handed out sweets to children at VDNKh. "I'm not connected personally with the charity, no, but I thought why not come? It's simply not true that children with Down syndrome can't achieve anything in life. Events like these are important to change people's opinions and to show what people with Down syndrome can do."

Encouraging comments like these are in tune with what was clear at the weekend's event as several eminent sportsmen with Down syndrome, including Andrei Vostrikov, who earned the title of absolute world champion in his field of gymnastics in Los Angeles this year, took part in the cycle ride. Three of these athletes covered the combined total of 123km in both Kaluga and Moscow.

Recent events in Nizhny Novgorod, where Russian supermodel Natalia Vodyanova's younger sister, who has autism, was forcibly removed from a cafe for "scaring off customers," are a reminder that views about people with developmental disabilities are still behind the times. But as the beaming cyclists on Sunday made use of the echoes under Moscow's bridges to chant "Downside Up!" public attitudes and the quality of life of these children seem to be gradually improving together.