The news should be that on Tuesday Teatr.doc, Moscow's smallest but noisiest playhouse, begins guest performances in Berlin with "Two in Your House" at the Schaubuhne.

But circumstances and the Moscow authorities have again conspired to make us look to the past even as we wish to look to the future.

In this case it is the recent past — Thursday, to be exact — when Teatr.doc was informed that, for the second time in six months, it was being deprived of its home base.

Managing director Yelena Gremina refused to acknowledge specifically that the reason for the new administrative measures was the theater's premiere on May 6 of a show called "The Bolotnaya Square Case," detailing the experiences of family members of those who were jailed following the infamous May 6, 2012 political protest on Bolotnaya Square. But her hints were clear.

"I honestly make no connections," she told Gazeta.ru on Friday. "I simply see a specific chain of events. The first is the premiere of 'The Bolotnaya Square Case,' with policemen attending the dress rehearsal, followed by investigations by the Emergency Situations Ministry and the fire department. The second is that I, as managing director of Teatr.doc, receive a subpoena from the Prosecutor's Office, and the same day our sublet agreement is annulled."

Doc, as the theater is known popularly, was pushed out of its previous space in December 2014 by the same method — the sudden cancellation of a rent agreement. Then the Moscow Property Department moved against the theater company; this time it was a private entity, from whom the troupe sublet a small, 18th-century building in the Baumanskaya region.

"On May 28 our landlords suddenly received an order from a superior office to break their agreement with us. They can do that without having to explain the reasons," Gremina explained.

In the half year that Doc occupied the building at 3 Spartakovskaya Ulitsa, it has cleaned, reconstructed, painted and reinforced the abandoned old building, making it into a beautiful working space. They were just beginning to take on the trash and tangled weeds in the back courtyard, which they were planning on turning into usable space.

The day they received the eviction notice they had painted the facade and hung out baskets of flowers on the front gate.

Since reopening in the new space on Feb. 14, Doc had unveiled an astonishing eight new shows, held several special events and hosted numerous visiting productions. There were often two performances a day, following several groups of rehearsals in the morning and early afternoons. 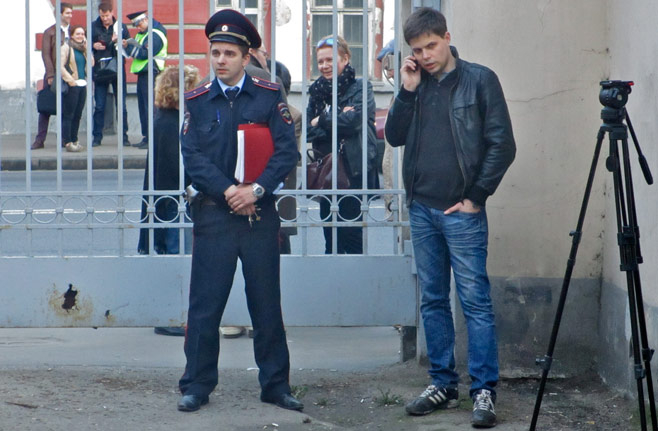 Policemen standing outside Teatr.doc before the "Bolotnaya" premiere.

Artistic director Mikhail Ugarov had all of this work in mind when he posted a bitter message to Facebook on Friday.

"Let's count," he wrote, "how many institutions in Russia kill all that is living? Beginning, of course, with the government, the State Duma, the army, the Interior Ministry, the courts, the prisons and the camps, the Culture Ministry and the Health Ministry — and concluding with the small offices. And how many [institutions] help the living live or survive? The score will be devastating."

By Sunday Ugarov was flashing a sense of humor. He wrote about greeting documentary filmmakers hanging around the theater, quipping, "So, you've come to a nonexistent theater, have you?"

When Doc was forced out of its first space last year, Gremina defiantly announced she would open 10 new shows by the end of the season. She made a similar promise Friday, insisting Doc will open five new shows in September alone.

Asked if she would soon be seeking a new space, she replied, "We're already looking."

Gremina is unable to say for certain who specifically has it in for the theater.

"The information we hear is that it is the Interior Ministry and [police headquarters] Petrovka," she told news site Meduza. "How much higher up the alarm sounded we don't know. But their investigation was not made at the request of citizens. It was a request from higher channels."

But Gremina, whom Ugarov described as being "cool as a rock" throughout the latest crisis, is unbowed.

"I suspect there will be an attempt to find administrative violations [in the renovation of the space of Spartakovskaya Ulitsa], and an attempt to deprive us of status as a legal entity," she told Gazeta.ru. "But merely taking away our space again and even denying us legal status — that doesn't mean closing the theater. Doc is people. And there are a lot of them, by the way."

Teatr.doc plans to play out its current schedule through July. Information will be available at teatrdoc.ru.