Contribute Today
By Raymond Stults
May 12, 2015

Apart from its staging of "The Story of Kai and Gerda," an opera aimed primarily at young audiences, the Bolshoi Theater's array of new operatic productions this season is made up entirely of reliable old warhorses: Giuseppe Verdi's "Rigoletto," Pyotr Tchaikovsky's "The Queen of Spades," Wolfgang Amadeus Mozart's "The Marriage of Figaro" and Georges Bizet's "Carmen."

All four of these works certainly deserve a place in the Bolshoi's repertoire and, to my mind, in productions that the theater can call its very own. But for reasons unknown, the theater chose to bring "Rigoletto" and "The Queen of Spades" to its stage in versions originally created elsewhere without any involvement on its own part.

Last December's premiere of "Rigoletto," which Canadian director Robert Carsen initially staged in France at the 2013 Festival of Aix-en-Provence and placed the action rather bizarrely entirely in a circus ring, proved reasonably successful.

"The Queen of Spades," which premiered at the end of February and returns on Friday for its second and final run of the season, seems a much more questionable choice. The opera's staging, by the highly acclaimed director of St. Petersburg's Maly Drama Theater, Lev Dodin, first appeared 17 years ago in Amsterdam and went on to be seen at the Paris Opera and the May Festival in Florence, Italy. Like many other productions of "The Queen of Spades" in recent times, it takes an unconventional approach to the opera's story. But unfortunately, Dodin's setting of the entire action in the ward of a St. Petersburg hospital for the mentally ill not only flies in the face of the libretto devised by the composer's brother, Modest Tchaikovsky, but also proves stupefyingly dull.

Saving the production from disaster is the musical performance, led by Mikhail Jurowski, one of today's finest interpreters of Russian opera, and with a mostly exceptional cast in which the principal roles have been entrusted to a group of Bolshoi guests. The same team, with one exception, is due to be on hand at the upcoming performances.

"The Queen of Spades" essentially relates the descent into madness of a young engineering officer named Hermann (or German, in Russian) as he seeks to earn a fortune at cards by learning the secret possessed by a certain elderly countess. When he finally obtains the secret, however, he discovers it to be worthless.

In Dodin's production, we find Hermann thoroughly mad from the very start and the opera's seven scenes played out in the hospital ward as Hermann reminisces on what brought him to that sorry state. 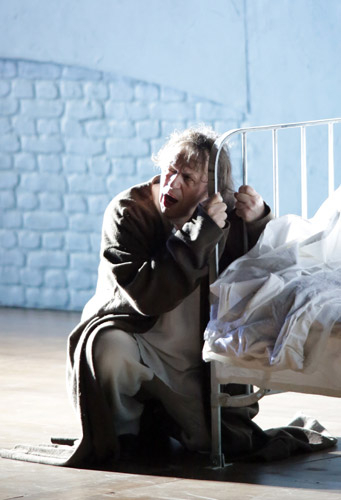 The character of Hermann is mad through the entire course of the opera.

In a lengthy interview reproduced in the Bolshoi's program booklet, Dodin avoids giving a direct answer to the question of why he chose to stage the opera as he did. Instead, he points to the well-known criticisms of the libretto, its straying from the underlying short story by Alexander Pushkin and its often prosaic language. He also makes much of the idea that a director, in effect, is the partner of an opera's creators, with freedom to interpret and alter it as he sees fit.

That's all well and good. But in the case of "The Queen of Spades," it has ended up twisting the story in such a way as to render it both undramatic and, at times, nearly incomprehensible.

What does make "The Queen of Spades" worth attending is the masterful way in which Jurowski handles the music. I've heard the opera many times, and even sung in it many years ago as a chorus member, but never before have I witnessed a performance that so fully revealed the beauty of the score.

Added to that, above all, is Vladimir Galuzin's interpretation of Hermann. Hermann is a nearly impossible role to adequately cast. It requires an unusually strong but flexible voice, superb diction and acting ability of the highest caliber. Galuzin combines these qualities in such a way as to be considered far and wide the finest Hermann on today's operatic stage.

My guess is that "The Queen of Spades" in its current form will be performed again for a season or two and then quietly disappear. The work itself, however — one of the half dozen most important of all Russian operas — definitely needs to occupy a permanent place in the Bolshoi's repertoire. And I am sure that many others join me in the hope that the theater will next come up with a production of its very own, one that is both innovative and yet remains true to the intentions of the composer and his librettist brother.