BEVERLEY HILLS, United States — Andrei Zvyagintsev's “Leviathan,” a dark and brooding film that depicts Russia as a corrupt and cruel society, took the Golden Globe for best foreign-language film late Sunday, making it one of the favorites to win the Academy Award in the same category next month.

“Leviathan” tells the tale of Nikolai, who has his property seized by a corrupt mayor in a small town in northern Russia. Sony Pictures Classics co-president Michael Barker called it a cross between Dostoyevsky and “The Godfather.”

It is in part a retelling of the Biblical book of Job, a man seemingly forsaken by God, and it has critics swooning in the West, while others wonder how a film so harsh in its depiction of Russia came to be put forward by that country for an Academy Award.

“I feel great responsibility that “Leviathan” has been chosen to represent Russia and Russian culture,” Zvyagintsev told The Moscow Times, adding, “One of the most important traits of great Russian art is its unflinching honesty. With ‘Leviathan’ I strive to be worthy of this tradition.”

The Golden Globe is one of a series of prizes that "Leviathan" has taken, including the best screenwriter prize at Cannes and best film at the London Film Festival. The film has been sold to 70 countries, but its release in Russia has been continually delayed.

“Leviathan” is the first Russian film to win a Golden Globe since Sergei Bondarchuk's massive dramatization of “War and Peace” in 1969.

“We faced challenges at home for making this movie, and we feel especially honored that it has been recognized as both a daring statement about our own country and a universal commentary on man versus church and state,” producer Alexander Rodnyansky told The Moscow Times.

While the film's creators say it was inspired by a case in the United States in which a man caught up in a zoning dispute demolished buildings with a bulldozer and then killed himself, “Leviathan” has been praised for its searingly precise depiction of venal Russian officials, pompous priests and useless police. 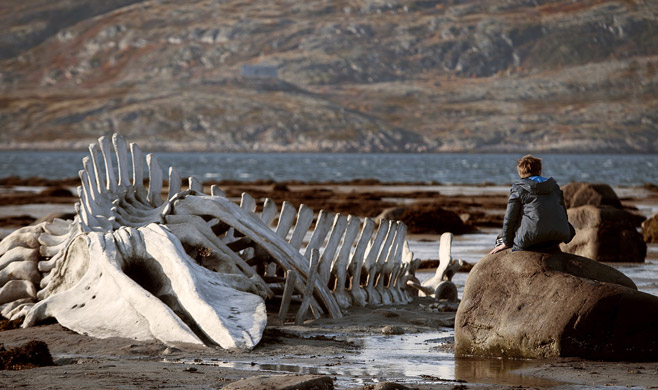 "Leviathan" is set in a small town on the Barents Sea. Zvyagintsev's film is hotly tipped at the Academy Awards.

Veteran Russian film critic Daniil Dondurei said in a phone interview with The Moscow Times that the film is tough but gives a different view of the country.

“The world currently only sees shooting in Donetsk or [President Vladimir] Putin's speeches. Here you see [Nikolai] worrying about his son and wife, see him drinking vodka, see how things are in Russia,” he said.

Dondurei remembers the screening of “Leviathan” in Cannes last year, where the film won the screenwriter award. “I felt such a feeling of patriotism. The Cannes Film Festival — it's like being at the World Cup — and 3,000 people stood up at the end and applauded for 15 minutes,” he said.

One person missing from that screening, said Dondurei, was Culture Minister Vladimir Medinsky, who has said that he doesn't like the film because of its use of swearwords. Medinsky has called for patriotic films to be made, and reportedly said that “Leviathan” exaggerated how much people in Russia drink.

The film's dark subject matter and the public antipathy from the minister had many assuming that Russia would not put the film forward for the foreign-language Oscar.

The decision, however, was not down to the ministry, but to a cinematographic committee made up of veteran directors who put the film forward in September. They decided to show that they could be independent and that they had honor, and after that it was difficult for the state to overrule them, Dondurei said.

But not everyone at the Culture Ministry is so negative about “Leviathan.” Two officials contacted by The Moscow Times on Monday gushed about their excitement. 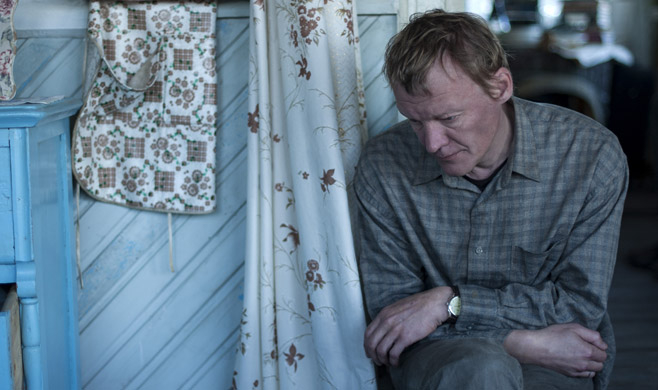 Alexei Serebryakov plays Nikolai in the film, which took a Golden Globe.

“It's wonderful, the second biggest international award after the Oscars,” said one, asking that his name be withheld from print. “We hoped that it would win, and we're really happy.”

He confirmed that Medinsky didn't like the film because of its swearing.

The film's release in Russia has been continually delayed because it cannot be shown in its current form due to a new law passed last year banning swearing in films and other media. “Leviathan” is now set to be released — with the swear words removed — on Feb. 5, although the film has already been leaked to pirate sites.

“All the films represented at the Oscars were uploaded illegally. We won't prosecute anyone for it,” producer Rodnyansky told the Russian News Service. “Audiences have reacted positively. We were worried that the film would polarize Russian society.”

Victory at the Golden Globes will ensure that the film will get a decent release, said Dondurei, explaining that otherwise, conservative elements in Russia might have pressured movie theaters not to show the film.

“It has a chance of winning the Oscar,” said the film critic, who thinks that the Polish film “Ida” by Pawel Pawlikowski, about a nun discovering dark family secrets, is the Russian entry's only real competition.

The director's previous films have all gained international recognition. Zvyagintsev, 50, came to fame with his debut film “The Return,” released in 2003, about a father who returns to his family after years away. The film, which Variety magazine described as “constructed like an eerie, metaphorical thriller,” won a Golden Lion at the Venice Film Festival and was nominated for best foreign-language film at the Golden Globes.

His second film, “The Banishment” (2007), about the breakdown of a relationship, saw actor Konstantin Lavronenko win the best actor award at the Cannes Film Festival. Its followup, “Elena,” which The New York Times called a "vision of Moscow as a jungle teeming with predatory wildlife," won the jury prize in the "Un Certain Regard" section at Cannes in 2011.

Dondurei has one wish if Leviathan makes the shortlist Thursday for the foreign-language Academy Award and goes on to win it on Feb. 22.

“The state should be clever and if it wins the Oscar say that it was always certain that it would win,” he said. “I hope that the minister will go and shake his [Zvyagintsev's] hand — or that they will force him to go [to the ceremony].”

Renowned Russian director Andrei Zvyagintsev's "Leviathan" has been nominated at the Golden Globe awards, in the best foreign language film category...
what's cooler than being cool?

A photographic tour inside the cathedral, revealing its beauty and secrets.