Buoyed by the success of their first sold-out run earlier this year, the Moscow English Theater, or MET, returns to the Mayakovsky Theater to present a total of eight performances of two different shows starting this Friday, Sept. 27.

The first four shows will be a reprise of “Educating Rita,” the Willy Russell hit comedy drama that the MET presented to full houses in March, with actress Emma Dallow once again jetting in from London to join co-star Jonathan Bex on stage.

Bex, the English stage and television actor and founder of the MET, will then join forces with Gavin Robertson to present four performances of the comedy “2013: A Space Oddity” that the duo premiered to great acclaim at the 2011 Edinburgh Fringe and then toured Britain twice.

“Space Oddity is a bit more of an experimental piece,” Bex said in an interview with The Moscow Times. “We bill it as ‘every space movie you’ve ever seen in 80 minutes,’ and re-create the whole of the solar system on the stage with some kitchen utensils and some fruit.” Using those minimal props, Bex and Robertson embark on a theatrical voyage into space that pokes some fun while paying homage to the television shows and films of the genre that inspired them. “It’s a physical comedy, but with a noticeable story line,” Bex said. 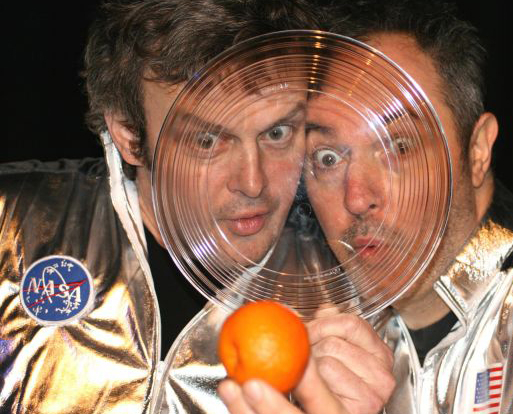 With the original production of “Educating Rita,” Bex discovered that the appetite for English-language theater in Moscow extends to native Russians as well as the native English speakers from the expat community. Estimates had the audience split about equally between the two groups in the spring, and Bex hopes that the two forthcoming productions will have the same cross-community appeal. Such a result would signify to him that the MET has taken the next step toward establishing itself as a permanent professional English-language theater in Moscow.

“We’re in it for the long term,” he says. “Our aim is to become a fixture on the Moscow theater scene. The Royal Shakespeare Company has toured here, but otherwise there is little by way of English theater, and especially amongst young Russians there seems to be a demand for it.”

“Vienna, Frankfurt and Hamburg all have their English theaters that operate throughout the year. I think there is fertile soil for a company like this to work in here,” Bex said.

A crucial part of the process so far has been the formation of a good relationship with the Mayakovsky Theater, Bex said.

“We could have done this in any number of places, but we felt it was important to be in a recognized theater, and with the Mayakovsky we get the impression that they believe that we are just the beginning of a journey that we can take together.”

If all goes well on that journey, Bex envisions a future in which the MET not only produces shows locally but also becomes the agent by which productions from England can be brought to Moscow. The idea of developing the company to the point that it is a joint effort between English and Russian professionals is also one that excites him.

“We have toyed with the idea of doing an open air production of a ‘A Midsummer Night’s Dream’ with a mixed cast,” he says. “That’s something that still needs some thought, but perhaps it is something we can marry next year with the year of culture between Britain and Russia.”

Not wanting to get too far ahead of himself, Bex’s thoughts turn back to the two shows that are about to open.

“I suppose that with everything we do, we’re taking a bit of a risk and wondering if the audience will go with us. ‘Rita’ is returning by popular demand, but the new show will give us some indication of how much further we can go.”

Solyanka is one of Russian dishes that has a very convoluted and confusing history. Is it a soup or a main course of stewed cabbage? Is it spelled &nbsp...