As the joint creation of two master composers, “Die drei Pintos” (The Three Pintos) must certainly count among the most unusual works in the entire operatic repertoire.

Carl Maria von Weber began composing the music in 1820, but left the opera unfinished at his death in 1826. Gustav Mahler eventually completed it six decades later.

The finished product finally reached the Russian stage at the end of last month, 125 years after its first performance, in a staging by the Pokrovsky Chamber Musical Theater.

Gennady Rozhdestvensky, the 82-year-old doyen of Russian conductors and musical director of the Pokrovsky, rarely passes up an opportunity these days to perform music that lies out of the mainstream. And it was he who came up with the idea of adding “Die drei Pintos” to the Pokrovsky’s repertoire.

He explained his reasons to a group of journalists assembled on the eve of the premiere: “First of all, because I like the opera very much. Second, because it’s the work of two musical geniuses. And third, for the banal reason that it has never before been performed in Russia,” he said.

Weber left behind just seven out of 17 planned musical numbers and 1,700 bars of music in all, only 18 of them fully orchestrated.

His widow and son repeatedly tried to interest prominent composers of the day in completing the opera, but to no avail. Finally, in 1886, a grandson of the composer persuaded the then 26-year-old Mahler to undertake the task.

Mahler had greatly admired Weber as a composer and, in finishing “Die drei Pintos,” adhered faithfully to the buoyant, tuneful Early Romantic style of Weber’s music. The result was a score that almost seamlessly blended the two composers’ contributions.

Only here and there are hints of the later Mahler, nearly all of them to be found in the handling of folk and folk-like tunes such as those that play so prominent a part in his symphonies. 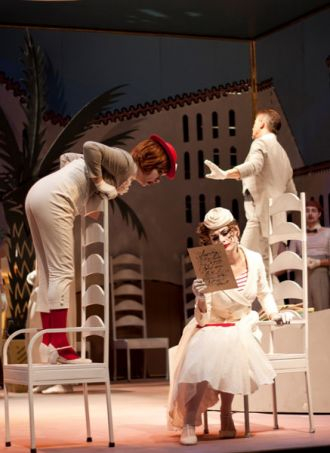 Mahler himself conducted the opera’s premiere at Leipzig’s Stadttheater in January 1888, to an audience that included Richard Strauss and Pyotr Tchaikovsky. Strauss declared it “a masterpiece.”

The score played a critical role in calling public attention to Mahler’s gifts as a composer, though, somewhat ironically, Mahler was never again to set his hand to writing opera.

Performed with much success in other European opera houses in the wake of its premiere, “Die drei Pintos” soon fell into obscurity and has very seldom been heard since.

The opera’s strong point is its score, full of rollicking tunes and lovely lyrical episodes, accompanied by finely crafted orchestral writing. There is really never a dull moment musically, which makes one wonder why the work hasn’t achieved at least some degree of popular acceptance.

The answer probably lies in its story, a rather silly and drawn-out affair centering on three young Spanish noblemen. One of them is the real Don Pinto de Fonseca, with the other two impersonating him. All are in pursuit of a wealthy young maiden of Madrid named Clarissa.

The real Don Pinto is a boorish country bumpkin, whom both Clarissa and her imperious father reject as an impostor. A certain Don Gaston from Salamanca convinces both of them that he is indeed Don Pinto, but eventually cedes both Clarissa’s hand and his bogus identity to Clarissa’s true love, one Don Gomez.

At the Pokrovsky, director Mikhail Kislyarov hasn’t helped matters much by taking inspiration from the famous French mime Marcel Marceau — the majority of characters are in whiteface — and adding a touch of Charlie Chaplin.

Imitating the manner and gestures of Marceau or Chaplin requires rigorous training and practice; the Pokrovsky singers handled the mime-like action with remarkable skill but the result nevertheless proved heavy-handed.

Particularly in the first of the three acts, the opera’s beautiful melodic line was often all but blotted out by a relentless stream of “visual noise.”

Musically, however, the production was a near-total success. The cast I heard at a preview proved to be as fine a group of singers and singing actors as might be found in any Moscow opera house. Rozhdestvensky gave a commanding and appropriately vigorous account of the score, though his orchestra might certainly have benefitted from more string players than the number accommodated by the theater’s tiny orchestra pit.

Despite my reservations, I feel inclined to recommend “Die drei Pintos.” Some viewers will no doubt take a more generous view of the staging than I have, and no true opera lover should miss the rare opportunity to hear Weber’s and Mahler’s enchanting score.

The opera is sung in the original German and its spoken dialogue delivered in Russian translation.