When Andrei Zvyagintsev's award-winning film "Leviathan" came out, nearly every reviewer who wrote about the film took the opportunity to mention the way the movie depicted the bleakness of life in the Russian north. Boris Akimov, the founder of the Moscow farm-to-table cooperative LavkaLavka, took these descriptions as a challenge. This spring, Akimov led a group to the village of Teriberka, where "Leviathan" was filmed, to explore the culture of the Russian north and show Muscovites that there was more to the region than meets the eye.

The project, called "New Teriberka," has produced a blog, a short film, a local festival and a special Arctic menu at the LavkaLavka restaurant in central Moscow. The special menu, which runs through June 12, includes turbot and cod, two venison dishes and a special sorbet made from regional berries.

While Arctic dishes haven't featured on LavkaLavka's menu before, the idea of putting an intense focus on cuisine from a particular region — or even a particular farm — is at the heart of the LavkaLavka concept. The organization, founded in 2008 as a farmers' cooperative, aims to make Russians more aware — and proud of — their food.

"We are trying to source from all over Russia," said the LavkaLavka restaurant's PR manager Maria Zlatopolskaya. "We are trying to celebrate different areas of Russia, bring the regions to Moscow, to help people know what they have in their own country."

The restaurant, which celebrated its first birthday last month, grew out of a series of culinary evenings that was part of the LavkaLavka concept almost from the beginning.

From its founding in 2009, LavkaLavka has sought to connect farmers with consumers, and as the local food movement is still in its early stages in Russia, the cooperative realized that it would have to work to educate consumers not only as to why eating locally was better for them, but that it was even possible in modern Russia.

As part of this educational outreach LavkaLavka began hosting occasional prix fixe dinners featuring food produced by a single farm or region. Eventually, the desire to expose more people to dishes made with locally grown items resulted in the restaurant.

"They were hosting these gastronomic evenings and they wanted more and more people to try them," Zlatopolskaya said. "Here they started with gastronomic sets, and it wasn't open all day, only in the evening. They worked like that for three-four months and then decided they could work like a normal restaurant."

The restaurant characterizes its cuisine as "New Russian," but in reality this means a contemporary take on old Russian recipes. This is mostly out of necessity, because the commitment to sourcing only from Russian farmers means that the available ingredients don't always lend themselves to modern or global cuisine.

"The seasonal factor is hard," Zlatopolskaya said. "In the winter, we have lots of potatoes, carrots, onions. In the summer we have berries, but not a lot of vegetables. Meat is always hard to find in summer, but we have lots of meat in winter. In the winter we don't have herbs, so the kitchen is trying to make the food tasty without the herbs." 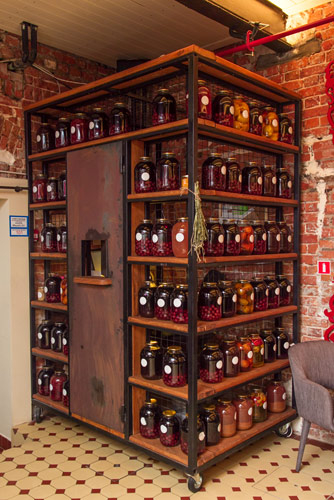 Preserved fruits and vegetables can be used in recipes during the winter.

The restaurant's menu depends not only on the season, but also on what is available on any given day. The supply chain is not consistent, and the chefs may only have enough of an ingredient to make two or three portions of a given dish.

Zlatopolskaya says that the clientele is generally understanding.

"Some customers don't understand, but those who know the concept of LavkaLavka and farm to table, they know they can always find something else," she said, noting that the restaurant tends to attract foreigners who are familiar with the farm-to-table concept and support the effort.

Online reviews back up Zlatopolskaya's comments. The restaurant averages 4 ? stars on both TripAdvisor and local site Afisha, with several reviewers noting that the concept is excellent, even if occasionally something on the menu isn't available.

One reviewer, who identified herself only as Irina K., noted at both the beginning and the end of her review that she supported the concept of the restaurant, even though the mushrooms were missing from her omelet and there were only a few drops of sauce on her dessert.

LavkaLavka continues to host culinary evenings and lectures from farmers to introduce customers to new products and how they might be used. Tonight the cooperative hosts Stanislav Sabaneyev, "the hunter," for a dinner featuring game and produce gathered from the forest, like wild mushrooms and berries.

The organization is also trying to reintroduce produce that was common in Russia before the Soviet era but disappeared during the agricultural reforms of those years.

"The first idea of our founder was to grow vegetables that have been forgotten," Zlatopolskaya said. "For example, asparagus — it was grown in Moscow in the 19th century, but now it sounds crazy. Now, this year, we had some portions on the menu. It was just a few portions, but it was Russian asparagus. We try to create the culture of fruits and vegetables we had before but was lost."

Today there are five LavkaLavka shops in addition the restaurant; products can be ordered online, and in December the group plans to open a farmers' market at the Mega Mall in the Moscow suburb of Khimki. But even as the cooperative grows, its mission remains the same.

"All these ideas have one aim," Zlatopolskaya said, "to show that Russia has a lot of resources and we need to make them work.

"We're not trying to go east or west, we're trying to make our own way."