An impressively large bottle of single malt whiskey greets visitors, followed by an unusually shaped beer bottle and a pale ale that you have probably not tasted before. This is not a bar, but the Museum of Applied, Decorative and Folk Art, and an exhibit devoted to German design.

The whiskey bottle does not hail from Scotland but from Hausbrauerei Altstadthof in Nuremberg, Germany, a craft brewery that branched out into the hard stuff. The beer, a Brauerei Clemens Harle light beer is from Upper Swabia and the bitter from a little-known German brewery

These drinks, which were offered to taste at the opening — and let's just say didn't completely convince anyone to give up on Scottish whiskey — are part of a random and fascinating assortment of over 100 different examples of German ingenuity, ranging from a collection of dolls made from rags, flax and florist's wire from Munich to beautifully crafted ceramic cookware from Lower Saxony.

"We have well-known brands and up-and-coming designers on display," said Pascal Johanssen, curator of the exhibition, who calls those behind the items on show manufacturers. "Despite the fact that the word 'manufacturer' might sound old-fashioned, they have succeeded in creating something new. It is the philosophy of the 21st century to have regional strength."

Each item comes with carefully written explanations in English and Russian. Did you know that accordions from the Saxony region are comprised of 2,500 individual parts? 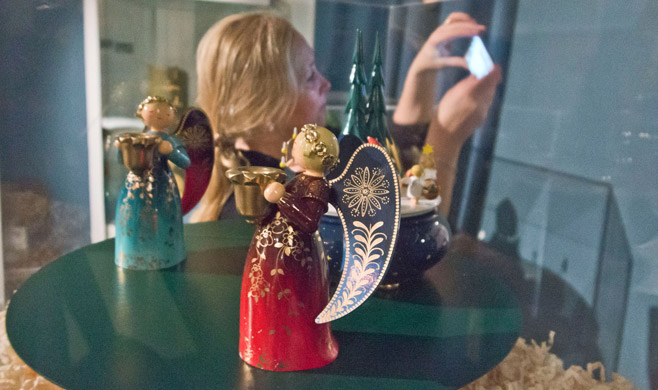 Dolls and alcohol are all on show.

"Craftsmanship is turning fashionable again. People are tired of mass production and are looking for unique things," said Johanssen.

The items on show range from the delicately crafted porcelain of Berlin's Royal Porcelain Factory, which dates back to the 1700s, to handmade watches made by Lang & Heyne, which was founded in 2001.

"We have been trying to find something from each section of German culture. Food, alcohol, furniture, porcelain, watches and glasses. There is a mixture of everything. We have almost every region of Germany on display here," said Frauke Ulrich, one of the directors of Handmade in Germany.

A number of the items on show, such as the German alcoholic drinks, handmade glassware and ceramic pots, can be picked up and examined — unlike most of the other stuff on show in the decorative arts museum.

"Handmade in Germany" will run until March 1 at the Museum of Applied, Decorative and Folk Art. 3 Delegatskaya Ulitsa. Metro Tsvetnoi Bulvar. Tel. 495-609-0146, www.vmdpni.ru.