Farrell, who first came to Moscow with Balanchine in 1962, spoke to The Moscow Times at a reception at Spaso House, the U.S. Ambassador's residence, about her time with Mr. B, as she calls Balanchine, and this week's performances.

"One-act ballets" at the ZiL Culture Center will feature four short pieces, two of which are choreographed by Balanchine and one by Paul Mejia, Farrell's ex-husband.

Balanchine served as ballet master and chief choreographer at the New York City Ballet for more than 30 years. He and Farrell had a special relationship, said Farrell. "Our work was us really," she said.

Decades after his death she works with the George Balanchine Trust to preserve and promote his ballets.

"I'm constantly discovering another facet of his genius," she said.

Born in St. Petersburg in 1894, Balanchine was the son of a noted Georgian composer and originally called Giorgi Melitonovitch Balanchivadze. He turned his back on bolshevik Russia in 1924 when he defected on a dance tour in Germany, heading to Paris where he joined the Ballets Russes. It was there that he changed his name to Balanchine on the advice of theater impresario Sergei Diaghilev. He moved to the United States in 1933 and is considered the father of American ballet.

Farrell fumbles her words and gazes into the distance when she talks about Balanchine. She was picked out by him when she was 18 after his prima ballerina became pregnant. Farrell had just a week to learn the role before the premiere.

She danced in front of Balanchine in a rehearsal in what she thought was a terrible performance. 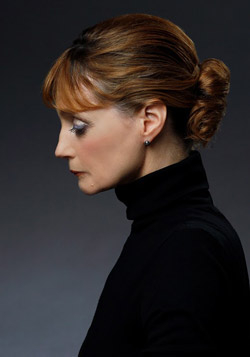 "Dear, you let me be the judge, he said to me, and from that day onward I always believed him," said Farrell.

Balanchine called Farrell his "alabaster princess" and created a number of famous works for her at the New York City Ballet. The relationship between the choreographer, who had married four of his dancers, and the young ballerina, who was 42 years his junior, was tempestuous and soured after Farrell married Mejia and the couple left for Europe. Farrell returned to New York and worked with Balanchine again in 1975 until his death in 1983.

Balanchine had a reputation as a hard taskmaster but Farrell said that he was very fair and understanding when his pupils made mistakes or found his choreography difficult. "Perfect [was] not always perfect" for him, she said. "The act of trying [was] already a success."

After several years Farrell said she was so used to his technique that her body "wanted and needed his classes."

Farrell talks of "Meditation," the first ballet that Balanchine choreographed for her. Her nervousness helped the piece.

"I had never been in love before and was frightened to death and kept wobbling" she said, demonstrating the movement that she found difficult, "but sometimes being in love is awkward."

Balanchine was always curious to know how he could push boundaries and to discover new ways to dance en pointe, said Farrell. "It was exciting" Farrell remembers, "to alter gravity, to defy gravity."

Remembering the trip in 1962 to Moscow, Farrell said, "it was meaningful to be back in Mr. B's home country." This trip, in turn, she said, will be useful for her dancers to learn from the Russian dancers who perform on the same bill this week, whom she called "very spirited and full of energy."

Balanchine had, with Igor Stravinsky, one of most important music and dance collaborations of the 20th century.

"Monumentum Pro Gesualdo" and "Movements for Piano and Orchestra," which Farrell's ballet company will perform in Moscow, are two pieces Balanchine choreographed to Stravinsky pieces.

His "unique musicality and connection to great music" is "one reason Mr. B's ballets are so special," said Farrell.

Lincoln Kirstein, who co-founded the School of American Ballet with Balanchine, once said the piece is supposed to evoke "the deliberate, almost sinister gravity and fatality shadowing court dances."

The other two pieces will be danced by Theatre Ballet Moscow.

"Divertissement for Idomeneus opera," a pantomime-style romance set in the 18th century, is choreographed by Georgia's George Alexidze to music by Mozart.

"Violin Concerto," choreographed by Mejia, is set to music by Pyotr Tchaikovsky.

Farrell is very protective of Balanchine's work and is certain that it will please the audience.

"I don't like to think of them as being changed — rather, they get a little bit adapted or altered," she said. "We don't want the ballet to become a museum … you want [a performance] to be live, and the audience should go away feeling the same — alive."