Rising artist Zorikto Dorzhiyev's new exhibit "Imaginary Reality," now on at the New Tretyakov Gallery, brings the viewer to his home of Buryatia, life on the steppe and nomadic life.

Born in Ulan-Ude, the capital of Buryatia, Dorzhiyev's art — paintings, sculptures, drawings — explores the intersection between traditional Buryat life and the modern world.

"There are personal paintings, and then there are more academic paintings," Dorzhiyev told The Moscow Times at the opening last week, his arm sweeping across the gallery to his reworking of the Mona Lisa.

Instead of the faintly smiling face, Dorzhiyev has painted a heavily stylized, angular Buryat woman with silver ornaments woven through her hair and a traditional hat, called a malgai, in a painting, which has been dubbed the "Madonna of the Steppes." 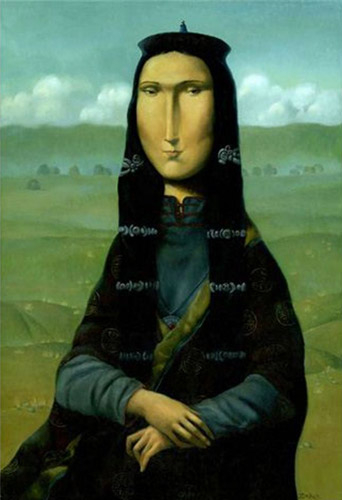 Modern "Madonna of the Steppes"

His paintings often deal with this meeting of old with a sense of humor. In "Angry Birds" a girl in traditional dress, her hair braided, frowns in the glow of a mobile phone screen ("Angry Birds," 2014).

"The paintings are arranged chronologically more than anything, from completely fresh work to pictures painted fourteen years ago," said Dorzhiyev of the retrospective. "My older work I can look at fairly calmly now, I can look at it with less emotion."

Behind Dorzhiyev's Mona Lisa is his "Girl with Peaches," a take on Valentin Serov's 1887 masterpiece which hangs in the Tretyakov Gallery. In the original, the artist's daughter sits in a pink blouse, her expression between neutral and content.

In Dorzhiyev's version, a small Buryat girl is in profile. She looks to the side with her chin up, her face turned away from a plate of peaches and away from the artist.

He also has his own interpretation of Johannes Vermeer's "The Girl with the Pearl Earring" called "The Girl With the Coral Earring."

Dorzhiyev studied at the Krasnoyarsk State Institute of Arts before spending three years at The Russian Academy of Art. He has had solo shows at the Victoria and Albert Museum in London and the Russian Museum in St. Petersburg and his fame has spread wide.

He donated one painting in December to an auction run by Tibet House, the cultural center of the Dalai Lama. The center's president is Columbia University professor Robert Thurman, father of actress Uma Thurman, who is a fan of Dorzhiyev's work.

Uma Thurman presented one of works, "Steppe Nirvana," when it sold at a Christie's auction in New York for $40,000, Siberian Times reported. 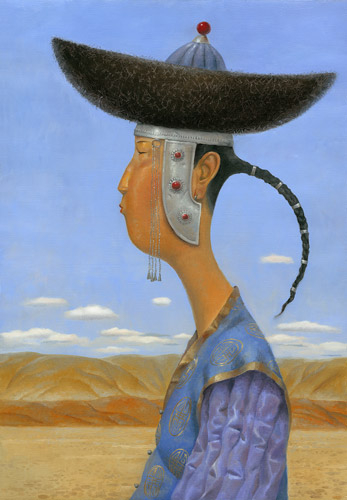 Dorzhiyev has had solo shows in St. Petersburg, at the Russian Museum.

"His theme is the Great Steppe, which he deals with often in literature, in cinema and which is almost never looked at in Russian landscape art," wrote the Russian Museum for their exhibit in 2009.

Dorzhiyev's father is himself a famous artist, but the family's ancestors worked closely with the steppe, as shepherds, blacksmiths, archers, and many of his subjects — horses and fighters especially — are nomadic ones.

"I tell a story of love and solitude; joy and sadness; war and peace; beauty of a woman and the innocence of a child. Steppe is merely a background. This is the easiest way for me to reproduce the worlds I imagine. Although many pieces are filled with traditional Steppe attributes — this is nowhere near ethnography," Dorzhiyev told the Russian Mind web site in 2011. "This image of a medieval nomad is so much in tune with he thinks he can have a better life; so we are in a permanent search of finding something better."

"He's a master right now, but he needs to work at it, because he's currently going through one specific artistic stage and there will be many more to come," said art historian and curator of the exhibit, Alexander Yakimovich. "We can now see his style changing very abruptly. I'm no expert, but I feel these changes, as the Russians say, in the very fibers of my being."

Yakimovich leads a crowd through Dorzhiyev's paintings and stops at a portrait of a woman facing away from the viewer. Her earrings are actual crafted pieces of jewelry which jut out from the canvas. "Look, you see, he's already experimenting. Stare, get lost in it. There's a mingling of beauty here which is incomparable."