City architectural preservationists are up in arms after the almost complete demolition of a famous Moscow Art Nouveau complex just a few hundred meters from the Kremlin.

Privalov House, designed by architect Ernst-Richard Nirnzee at the start of the twentieth century, is mostly rubble now after the company "Giant-XXI Century" sent in the bulldozers to make way for a multi-story underground car park, say activists from architectural preservation society Archnadzor.

"Two of the four buildings that make up this historic site are beyond repair," Rustam Rakhmatullin, from Archnadzor, said in a telephone interview. "One is mostly destroyed but restorable. However, no one is really talking about this. … This address is a testimony to our history and this is not considered."

The complex of buildings on Sadovnicheskaya Ulitsa was a well-known city landmark, partly because of the gothic facade on one of the buildings that was reminiscent of a medieval castle. The third building, where Sergei Yesenin first read his poems, was a famous gathering place for artists and prominent cultural figures.

Demolition began early on the morning of Jan. 16 and continued despite a one-man picket at the site by Archnadzor to "encourage the federal body for the protection of cultural heritage to take immediate action to restore the law and to stop the demolition of Privalov House, a cultural heritage site."

Activists from Archnadzor had previously written to the Ministry of Culture but neither federal nor city authorities stepped in to save the building.

"We cannot stop the demolition of buildings," a culture ministry official told the Interfax news agency last week, saying that any concerns should be referred to the Department of Cultural Heritage of Moscow. "If the department had decided to attribute this building regional significance then demolishing the house would not have even been considered."

The ministry, the Moscow department and "Giant-XXI Century" did not reply to requests for comment Monday.

Activist Konstantin Mikhalkov wrote on the Archnadzor site of how he spoke up in favor of saving the building at the city's committee on construction last year. "I talked of Sergei Yesenin … and of how the demolition would be a bad present for the 120th anniversary of the poet, which will be celebrated in 2015." 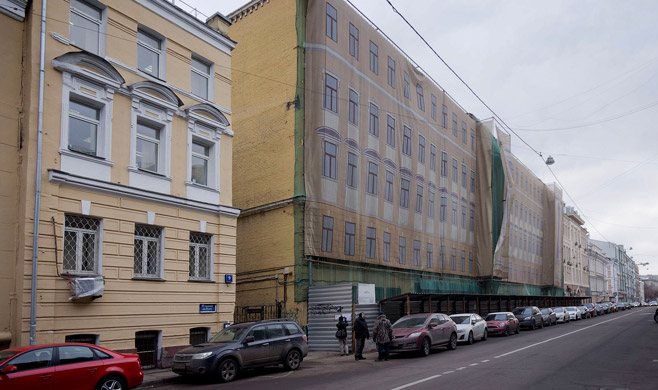 Privalov is covered up with a tarpaulin hiding the ruins of the buildings.

Hundreds of historical buildings in Moscow have been demolished since the end of the Soviet Union, especially under the previous Moscow mayor Yury Luzhkov. The current mayor Sergei Sobyanin made initial positive moves to show that he would protect the city's architectural heritage but activists say that the last couple of years have seen the city lose more and more valuable historical buildings.

Rakhmatullin and Archnadzor have now set their sights on campaigning for the creation of a "Council for the Protection of Heritage," made up of experts and not government officials.

"Despite the recent blow, this story is not over for us," said Mikhailov at a news conference Thursday.

Mikhailov said that history and culture heritage experts should be put onto the city's decision-making body. "There is a commission, but there are no specialists in development, no specialists in 20th-century buildings and streets. The order of proceedings is illogical and nonsensical," he said.

Rakhmatullin said that ideally this body would not only work to protect buildings and cultural sites, but would also attempt to make these sites known to the public and celebrate their existence.

Archnadzor strongly criticized how the city works, comparing the current situation to "cultural heritage experts solving nuclear physics problems by majority vote," in a statement on their web site.

"There are many other buildings that are under threat in Moscow," said Natalya Dushkina, a professor at Moscow Architectural Institute and granddaughter of Alexei Dushkin, the architect behind the children's department store Detsky Mir and Kropotkinskaya metro station. "This is not just a question of saving a building, it is a question of changing the system. We need a systematic change in attitudes to cultural heritage and cultural development in Moscow, otherwise we will just continue chasing one project after another."