Television "is the only force that can unify and rule and bind this country," British producer and journalist Peter Pomerantsev says in his superb debut book "Nothing Is True and Everything Is Possible," which follows the author's decade-long career in factual television set against the backdrop of Moscow's mega-rich parties, Siberian gangster cities, North Caucasus villages, London courtrooms and New York penthouses.

At the center of the book is a state that can mold itself into any system it likes: democracy, oligarchy, dictatorship. And its people reciprocate: They have become actors in the state's masquerade.

The result is a book that reads like a film. Through a series of vignettes, Pomerantsev illuminates a society obscured by lies. He finds a world where "everything is PR" and where "effectiveness becomes the raison d'etre for all." At first glance, this may seem bearable, harmless — at times, even a strength. But, as the author discovers, there is a dark side.

While his editors demand that he find "happy" or "uplifting" stories, Pomerantsev looks behind the screen and finds suicidal supermodels in mysterious sects and revolutionary oligarchs who long for their uncomplicated provincial childhoods.

As President Vladimir Putin's grip on Russians tightens, Pomerantsev's bosses increasingly ask that he steer clear of politics. But there is no evading the Kremlin in Moscow. The author shows how everything in Russia is directed from the top downward. But he never calls Putin by his name, referring to him instead as "the president." "Created from a nobody, a gray fuzz via the power of television," Pomerantsev writes, "the president is at the center of Moscow's fake reality." The reader feels Putin's presence throughout the book. In a country where even the critics are created by the Kremlin, this Orwellian image is far more frightening than his name.

Neither does the author name the propagandists who orchestrate the show — they are just "the men in Ostankino," a reference to Moscow's Soviet-era headquarters of state broadcasters, now transformed into a glittering TV empire "the size of five football fields that is the battering ram of Kremlin propaganda." Ostankino's power grows steadily throughout the book, as it sucks more producers and journalists — many of them Russia's finest — into its orbit, slowly killing Russian journalism.

The only Kremlin official Pomerantsev analyzes in detail is Vladislav Surkov, the man who has "directed Russian society like on a great reality show." The author has written extensively about him in his journalistic work, but in "Nothing Is True and Everything Is Possible," Surkov's rise from the head of PR at Ostankino under the "then grand vizier of the Kremlin court, Boris Berezovsky," to Putin's "gray cardinal" is just as surreal as the Siberian gangsters Pomerantsev films. 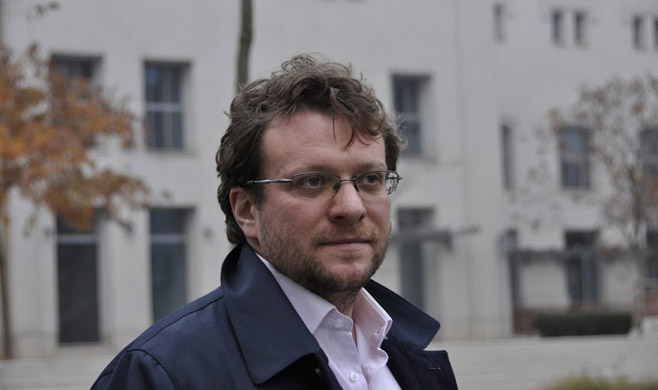 The book's author, Pomerantsev, was born in Kiev and lives in London.

Though a Kiev-born Londoner, Pomerantsev's knowledge of Moscow is immense. He depicts a city that "changes so fast you lose sense of reality" and documents the changing face of Moscow under Putin through one of the "good guys" in his book: an urban historian who yearns to save the old, human Moscow before the Soviets and oligarchs held sway.

The book is full of gripping dialogue with unpredictable twists and often reads like fiction. The chilling part is that it is not. Pomerantsev's undoubted strength lies in his ability to find and tell stories through which he exposes what happens to people when there is no truth. Love and the value of human life are no more: None of his subjects is able to have functional relationships, and all are in a constant state of confusion.

In this grim picture, the author finds hope in the quiet heroes of everyday life, many of whom turn out to be women: the St. Petersburg mothers who give refuge to conscripts fleeing bullying from their army camps; the Dagestani prostitute who shelters her sister from jihadism by welcoming her to the streets of Moscow; the businesswoman who is imprisoned because of distant FSB feuds and who turns to campaigning to reform a corrupt judicial system.

Most of the book takes place before the annexation of Crimea and the war in Ukraine. It chronicles Russia's descent into authoritarianism under Putin. The author becomes increasingly confused "in the world of Surkov and the political technologists" and finds that Russia was never a country in transition but a state in "delirium." He depicts Moscow's hallucinations as they spiral out of control in a fake reality. The further into the book, the more dangerous it feels — like a ticking time bomb. Reading this work during the conflict in Ukraine, one cannot help but think that Russia's war on reality could only end in real war.

On March 21, unknown masked men appeared in Crimea — part of the sovereign state of Ukraine. Soon soldiers with no insignia flooded the peninsula. Then there were fake elections, cheering old ladies and patriotic Russian musicals. All of it was televised. Russians — and the world — watched, stupefied, in their living rooms.

"Nothing Is True and Everything Is Possible: The Surreal Heart of the New Russia" by Peter Pomerantsev is published by PublicAffairs. 256 pages.