On Saturday evening, the Russian National Orchestra, for the sixth year in a row, inaugurates a new season of classical music with its "Grand Festival of the RNO." The first six of this year's seven festival concerts take place at the Tchaikovsky Concert Hall, with the Great Hall of the Moscow Conservatory serving as venue for the festival's finale on Sept. 28.

Russia's first privately financed orchestra since pre-Soviet times, the RNO was founded in 1990 by pianist Mikhail Pletnev, who, apart from a brief period a decade and a half ago, has led it ever since. Under Pletnev's baton, the orchestra has consistently ranked among Russia's finest symphonic ensembles.

The RNO opens the festival on Saturday with Pletnev appearing as both conductor and piano soloist. On the podium he leads music of Robert Schumann, the Overture to the composer's only opera, "Genoveva," and his joyful Symphony No. 1, to which he gave the title "Spring." And in his sole festival appearance as pianist, Pletnev plays and conducts Wolfgang Amadeus Mozart's Piano Concerto No. 8.

Pletnev returns to the podium on Sept. 8, this time featuring two of his own compositions: a Concerto for Viola and Orchestra, with Ukrainian-born, British-based violist and conductor Maxim Rysanov as soloist; and a work called "Jazz Suite for Orchestra." In addition, Macedonian pianist Simon Trpceski is due to play George Gershwin's "Rhapsody in Blue," in the first of his two festival appearances.

Next on the festival agenda, on Sept. 12, is a performance of Gioacchino Rossini's opera "Tancredi," led by 86-year-old Italian maestro Alberto Zedda, probably the world's No. 1 authority on the music of Rossini.

A tale of love and war, based on a play by Voltaire and set in 11th-century Sicily, "Tancredi," which premiered in 1813, marked the beginning of Rossini's rise to fame as a composer of opera. The warrior of the title role was written for female voice and has become a prime vehicle for leading contraltos and mezzo-sopranos ever since the opera's modern revival in 1952. Singing it will be the superb Irish mezzo-soprano Patricia Bardon.

The concert of Sept. 18 features music by Sergei Prokofiev and Pyotr Tchaikovsky. On the podium will be Ukrainian conductor Kirill Karabits, principal conductor since 2009 of one of England's leading regional orchestras, the Bournemouth Symphony. 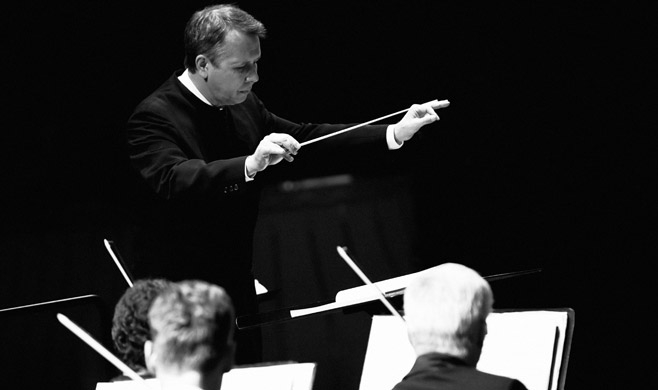 Pletnev will conduct a "Verdi Gala" in the final event of the Grand Festival.

The evening opens with Prokofiev's sparkling Simfonietta, originally written by the composer at the age of 18, while a student at the St. Petersburg Conservatory, and considerably revised some two decades later. Re-appearing at the festival, pianist Trpceski takes on Prokofiev's formidably virtuoso Piano Concerto No. 3. And Karabits closes the concert leading Tchaikovsky's Symphony No. 3, the so-called "Polish Symphony," the final four movements of which are well known to local ballet lovers as the music accompanying the "Diamonds" act of George Balanchine's ballet "Jewels."

Opera returns to the festival on Sept. 23, with a performance under Pletnev's baton of the second of Nikolai Rimsky-Korsakov's 15 operas, "May Night," a work based on Nikolai Gogol's short novel of the same name that contains the author's familiar mixture of realism and fantasy and filled with some of the composer's most alluring melodies.

With Pletnev on the podium, "May Night" features the voices of Belarussian mezzo-soprano Oksana Volkova, who has enjoyed much success as a Bolshoi guest artist in recent seasons, and light lyric tenor Sergei Romanovsky, who, following a brief stint at Novaya Opera, largely abandoned Russia to pursue a career on major operatic stages abroad.

Moscow may never before have heard a concert entirely made of music by the great Italian violin virtuoso Niccolo Paganini. But that is what the festival has on its agenda for Sept. 26.

With the orchestra led by Pletnev, soloist Ivan Pochekin, first-prize winner at the 2005 Moscow Paganini Competition, plays the composer's popular Violin Concerto No. 2, and completing the program is the world premiere of a transcription for guitar and orchestra of Paganini's Grand Sonata in A Major, prepared by Welsh-born composer Stephen Goss on a commission from the evening's guitar soloist Artyom Dervoyed.

Another treat lies in store for opera lovers at the RNO's final festival concert on Sept. 28, a "Verdi Gala," devoted entirely to scenes, arias, overtures and ballet music from the operas of Giuseppe Verdi.

With Pletnev conducting, the concert brings a return to Moscow of Ukrainian soprano Lyudmila Monastyrskaya, who, at the RNO's festival three years ago, received rave reviews for her performance in Verdi's Requiem as a last-minute replacement for an ill colleague.

The concert's program has yet to be announced, but Monastyrskaya's clear and quite powerful dramatic soprano will likely be heard in excerpts from Verdi's "Aida," "Macbeth" and "Nabucco," operas in which she has appeared to resounding acclaim on leading stages of Europe and the United States.