OSH, Kyrgyzstan — A historical epic billed as Kyrgystan's biggest ever blockbuster is now in the cinemas in the central Asian country as part of the latest government attempts to bolster patriotism.

But "Kurmanjan Datka: Queen of the Mountains" has been criticized for relying on public funds in a country steeped in poverty.

Based on a famous Kyrgyz tale from the 19th century, the film tells the story of a young woman who flees an arranged marriage to eventually become the leader of Alai highlanders in the Khanate of Kokand, a kingdom that encompassed modern-day Uzbekistan, Tajikistan, Kyrgyzstan, southern Kazakhstan and China's Xinjiang-Uighur autonomous region.

Kurmanjan is remembered for her fight against Russian imperial forces and, when surrender was unavoidable, for making peace as best she could — even allowing her son to be executed to avoid a rift with Moscow.

More than 10,000 people were employed during the making of the film, which took place over the course of three years at a cost of $1.3 million — reportedly making it the most expensive Krygyz film ever produced.

"Unfortunately, young people in today's Kyrgyzstan don't know much about our history," said Cholpon Idrissova, spokeswoman for the Aitysh Film studio which made the production. "The film is a visual legacy for the next generation, an attempt to arouse a spirit of patriotism among the young Kyrgyz, preserve the history and perpetuate the names of national heroes." 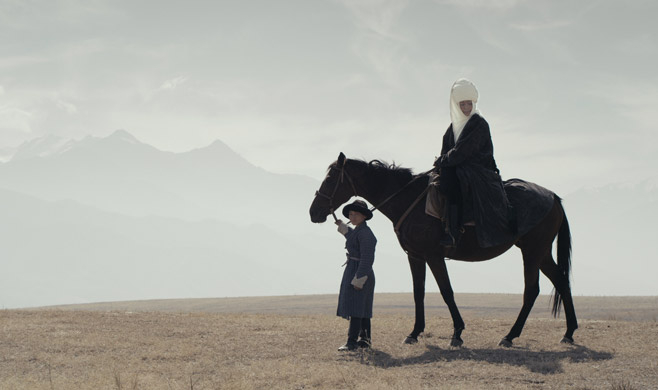 The film's budget of $1.3 million makes it reportedly the most expensive ever made in the Central Asian country.

Filmed in Kyrgyz and Russian, the movie is also subtitled in English, in an apparent attempt to attract Western audiences.

The idea for the production came from Zhyldyz Zholdosheva, a lawmaker from the nationalist Ata-Zhurt party, who approached several directors before settling on Sadyk Sher-Niyaz, a businessman-turned-filmmaker who had never made a feature-length movie.

Lead actress Nazira Mambetova said that Kurmanjan catches the imagination because she took action, unlike the men around her, and that Kyrgyzstan today lacks a leader who could help the country overcome its social and economic divisions.

"I've played hundreds of roles in the theater and movies in my 43-year career, but this role has been the most special," Mambetova said.

But critics of the project have questioned the government's role, as well as the significant cost to taxpayers.

"We must be careful in regard to making films with participation of the government," said Adil Turdukulov, chairman of the Foundation for Progress think tank.

Turdukulov said that while it is appropriate for the government to help develop the country's cinema — for example, by funding film schools, offering tax incentives to filmmakers, and holding festivals — spending public money on a large commercial production went too far. 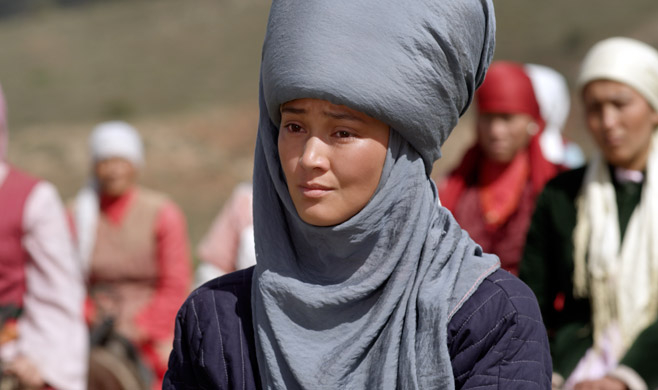 After running out of money, filmmakers went to the president for funding.

In addition, Turdukulov said basic rules were violated in the making of ­Kurmanzhan Datka; there was no tender to find a director, he said, and no attempt to find private money for the production, and a novice was entrusted with the project.

Further, he said, the budget was not settled in advance, "which resulted in 'our old disease' of begging for money from the authorities again." Halfway through shooting, Turdukulov said, Sher-Niyaz took the uncompleted film to the president, after which parliament approved a funding increase.

"I'd make sure that next time, if the government suddenly becomes generous enough to give money for a movie, the violations mentioned above are avoided. Then films will be made that are worthy of the talent of our people," Turdukulov said.

Orunbek Samidinov, a prominent lawyer in Osh, characterized the film as a public relations exercise for a country with major problems, including declining foreign investment, a patchy energy supply, and an increasing reliance on Russia for basic goods.

"The country is in poverty. The government is not doing anything to improve the situation. Everything is getting worse. Problems with gas and electricity force people to buy coal, and this [film] is additional [government] expenditure," he said.

"Would it not be better to spend the money to purchase coal for the socially vulnerable part of the population?" he said. "We lack someone like Kurmajan Datka who would lead the nation forward."

A version of this article first appeared in Transitions Online, part of the New East network.