HAVANA — There's no rice, beans or fried plantains at Havana's newest private restaurant. You can order a minty mojito, but it'll come mixed with vodka instead of the traditional white rum.

The waiters speak Russian, and patrons are expected to order in that language if they want to get served. But don't worry, the menus at this retro-Soviet restaurant come with translations and pronunciation guides for the non-initiated.

Nazdarovie, which is named for the popular Russian toast — "To your health" — and opened Friday, is all about Slavic fare like bowls of blood-red borshch and stuffed vareniki dumplings, hand-rolled in the back by "babushki" who were born in the former Soviet Union but have long called Cuba home.

It's a nod to nostalgia for the island's Soviet ties during the Cold War, a time when Moscow was Havana's main source of trade and aid and hundreds of thousands of Cubans traveled to the Soviet bloc as diplomats, artists and students.

"For most of them it was the first time they ever left this island. They have nostalgia about their time there, about the flavors they experienced for the first time," said Gregory Biniowsky, a 45-year-old Canadian of Ukrainian descent who dreamed up Nazdarovie and launched it with three Cuban partners.

"The idea with Nazdarovie is really to celebrate a unique social and cultural link that existed and to a certain degree still exists today between Cuba of 2014 and what was once the Soviet Union," said Biniowsky, a lawyer and consultant who has lived in Havana for two decades.

The collapse of the Soviet bloc largely ended the Havana-Moscow connection and sent Cuba into an economic tailspin. However, Russian President Vladimir Putin has talked recently of renewing the relationship. He made a state visit last month, Russian navy ships periodically dock in Havana's harbor, and Cuba has backed Russia in its dispute over Ukraine.

Occupying the third story of a historic building on the seafront Malecon boulevard, Nazdarovie is an homage to the old country.

Behind the bar, Russian nesting dolls and a bust of Lenin perch next to bottles of high-end vodka. Reproductions of Soviet propaganda posters line one wall in an attempt to spark conversation among customers sitting at a long communal table. About the only sign of the tropics is the million-dollar terrace view of Havana's skyline and the Straits of Florida.

Biniowsky said most of the ingredients can be found on the island, with some exceptions such as flour for black bread, and caviar, for which they'll rely on tins imported in the personal luggage of friends and family. It will go for about $15 an ounce, with fancier and pricier varieties available for special occasions.

In the air-conditioned kitchen, Irina Butorina stirred gobs of mayonnaise with potatoes, eggs, ham and peas to create an Olivier salad, a popular dish in former Soviet states that, according to legend, was invented by a Belgian- or French-Russian chef named Lucien Olivier. 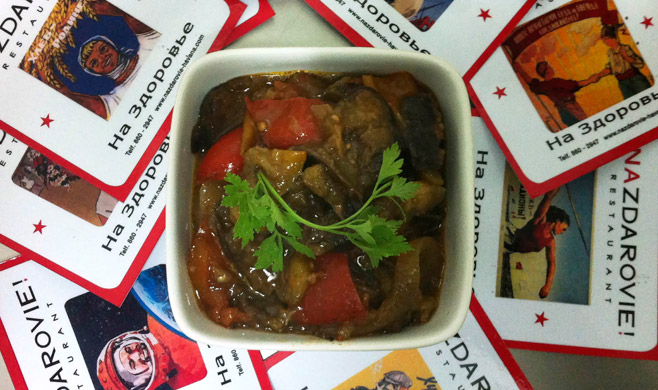 An appetizer of cooked vegetables at the Havana restaurant on Friday.

Butorina, 56, fell in love with a Cuban student she met at university in her native Kyrgyz Soviet Socialist Republic, now Kyrgyzstan, and moved here in 1984. She said the taste of her mother's recipes faded as she adapted to Cuba.

"At first I used to cook a lot of Russian food here, but then a lot of things disappeared from the market — cabbage, for example. … So I started making Cuban food," she said. "But these people here have started this restaurant. It was their dream … and our dream as well."

Experts say Butorina's story is typical of the Soviet diaspora here: Of the estimated 3,000-4,000 islanders who were born in the Soviet Union or descended from them, most are cases of Soviet women who married Cuban university students and moved to the Caribbean nation.

Some were divorced or widowed but remain in Cuba decades later with little or no tie to their homelands.

"I think for many it was a truly traumatic experience because there are many of our women who have not traveled, who have not returned to visit their countries after the Soviet Union disintegrated," said Dmitri Prieto-Samsonov, an anthropologist who studies the Soviet diaspora in Cuba.

At Nazdarovie, one poster in particular stands out amid the current crisis between Moscow and Kiev. Created under Nikita Khrushchev to commemorate the 300th anniversary of the reunification of Russia and Ukraine, it shows two runners representing the Soviet republics simultaneously breaking the tape at a finish line. "To the indestructible friendship and to new successes in sports," the slogan reads.

"That poster could seem like a joke, almost black humor," said Prieto-Samsonov, who was born to a Russian mother and a Cuban father and spent his first 13 years in Russia.

"I wish [the conflict] weren't happening between our countries," he added. "We have great desires for peace."

Biniowsky said Nazdarovie seeks to transcend politics and build community: People of Russian and Ukrainian descent and others working, cooking and eating side by side, united by the shared memory of a vanished nation state rather than divided by current animosities.

"Not in the kind of naive utopian sense, but sometimes breaking bread and getting drunk on vodka is key to peace."

On and Off the Trans-Siberian Train: The Rapper

Three films reveal different aspects of life in the Soviet century - but are they all so different?
Pass the popcorn

Moscow cinemas are ready to open their doors after a long quarantine. But there's a catch.