Andrei Zvyagintsev's new film "Leviathan," which was awarded the prize for best screenplay at the Cannes Film Festival, might be rejected by Russian distributors due to profane language in the film.

The film, which will be distributed in over 50 countries, might not make it to screens in Russia due to the new law regulating profanity in movies, theater and concerts, which will take effect on June 1. While theater owners might want to show Zvyagintsev's masterpiece, few of them are willing to risk the potential fines that could come from screening it.

The new law states that companies can be fined 40,000 to 50,000 rubles for a single violation of the law, while repeat violations can bring fines of up to 100,000 rubles, or a mandatory closure of the offending theater for three months

"Of course, we would like to show 'Leviathan,' — we try to work with all interesting films," said Anna Popova, director of the Eldar movie theater's repertoire department, Izvestia reported. "However, if the showing would entail a violation of the law, then we must examine the matter. The law has just been passed, so we — and all other theaters — need a new mechanism to observe the new requirements."

Alexander Rodyansky, producer of "Leviathan," hopes to find a way to distribute the film as it is, saying that Zvyagintsev "was very careful in his use of uncensored language," adding that profanity plays an important role in the film as "one of the main characteristics of the characters: like in that kind of situation, living in those kinds of conditions, talk more or less like that."

"Leviathan" is the latest film from Russian director Andrei Zvyagintsev, best known for his 2003 film "The Return" that won the Golden Lion at the Venice Film Festival. Some critics have called "Leviathan" a continuation of his 2011 film "Elena," which depicted the life of inhabitants of a crumbling Soviet apartment building in Moscow's suburbs. 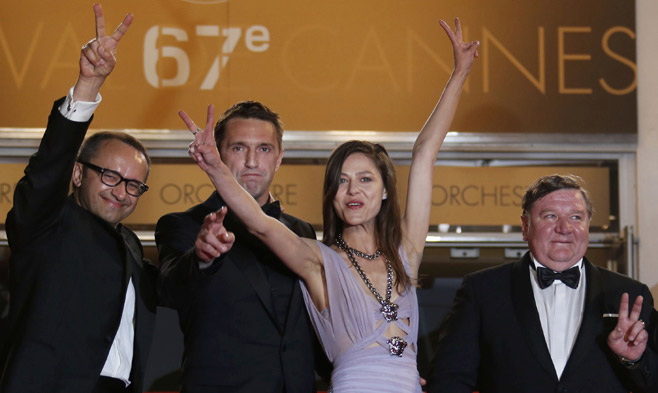 "Leviathan" takes the action far north, focusing on a small family living on the shores of the Barents Sea who try to defend their home against a corrupt local government that wants to seize their land. The kafkaesque tale if loosely based on the book of Job, yet set in a bleak modern-day Russia where corrupt and drunken bureaucrats twist the law and the courts for personal squabbles and profit.

Rodyansky hopes to get permission to distribute the film before July 1, when the new law will take effect, but "Leviathan" is not planned to appear on screens until September, making it unlikely that it could get around the profanity law: Even if the film has already been approved for distribution, depending on the law's interpretation each public showing of the film could be considered a new violation of the law.

"Right now it is difficult to say how it will work in practice, but most likely the law will work like laws regulating speeding. If you speeded in a specific spot in the morning and speeded again in he same spot in the evening, each of these instances is a violation of the law," said Sergei Zhorin, chairman of the board of the Moscow Bar Association, adding that the administration of the movie theater showing the film would be liable, not the director or producer of the film.

Despite the wide approbation the film has received from critics both in Russia and abroad, the Culture Ministry has shown no signs of relaxing its standards to allow the film's release. The ministry confirmed to Izvestia that "from July 1, showings in theaters of films containing uncensored language are prohibited," and has previously stated that all audiovisual works, regardless of their subject matter and purpose, fall under the new legislation.

The Culture Ministry has said that films with offensive language should censor the words, either by cutting portions of the film of changing the audio track.