While some special exhibits of the Fifth Moscow Biennale of Contemporary Art remain open this week, curators throughout the city are already dismantling most of the projects that the festival brought to the city last month. The Moscow Times spoke recently with Joseph Backstein, commissioner of the festival, who talked about his thoughts on this year's Biennale and the state of the Russian art world.

Backstein has been commissioner of the Biennale since its third appearence in 2007. In addition to this responsibility, he is director of the Institute for Contemporary Art and deputy director of the ROSIZO state museum and exhibition center, a government-owned corporation which organizes many of the largest displays of Russian art abroad, as well as numerous exhibits within Russia.

Looking back on his tenure as commissioner, Backstein noted that this year's Biennale was by no means out of the ordinary. The size of the main exhibit was roughly the same, the number of special exhibits and parallel projects somewhat increased but still comparable to previous years.

One key difference with previous Biennales was the use of Manezh: This is the first year that the Biennale was in Manezh, and it presented the challenge of utilizing the building's 90,000 square meter space with its lofty ceilings in a manner that would not dwarf the artwork on display.

Backstein largely attributed the success of "More Light,'' the exhibit in Manezh, to curator Catherine de Zegher. "She presented a very interesting, original theme … she picked out more than 70 artists from more than 30 countries, not just focusing on stars but picking less well-known artists, and she made an excellent exhibition in Manezh, a large, complex space," Backstein said.

Catherine de Zegher, who is Belgian, is by no means the first foreigner to curate the Moscow Biennale; indeed at the opening of "More Light," Backstein said foreigners were often preferred as curators for large exhibitions in Russia due to a feeling that they brought in fresh perspectives.

In the past, the Biennale has been in a variety of locations, from the State Historical Museum on Red Square, to the sprawling Artplay center, to several floors of a skyscraper under construction in 2007, yet Manezh presented the most prominent and most challenging space of all, Backstein said.

This year, Backstein particularly highlighted the many special and parallel projects, about 40 of which were carried out alongside the main exhibition. Projects such as "Department of Labor" at the State Tretyakov Gallery, 0 Performance at New Manezh, the Kabakov-Lisitsky exhibit at MAMM, John Baldessari's show at Garage, and "Foreigners Everywhere" at the Jewish Museum were highlighted by Backstein as some of the year's most successful. 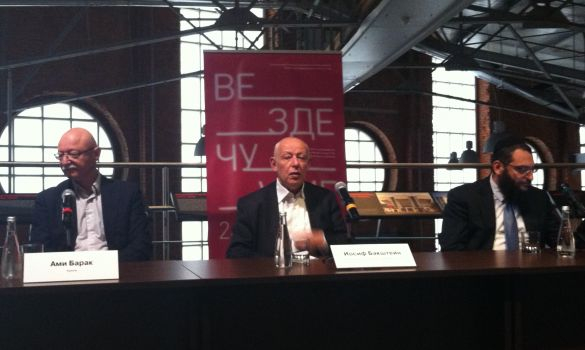 Joseph Backstein, center, at the opening of "Foreigners Everywhere," a special exhibit at the Jewish Museum.

In addition to the Biennale, the past month also saw the 17th iteration of Art Moscow, a yearly art fair that Backstein supported during its early history. This year was the first time that the fair was conducted in a new format that focused on smaller galleries, younger artists, and cheaper works of art, a move away from the big ticket names and prices that dominated previous years.

Backstein was skeptical of the new format, saying that he found the old format "fully satisfactory" and noting that the shift was more due to commercial necessities than artistic sensibilities. Art Moscow has suffered from the post-crisis shrinking of the art market and has seen a drastic decrease of its funding. While Backstein said "Moscow needs a serious art fair of this type," he did not sound terribly hopeful about Art Moscow's future.

Though Backstein was pessimistic about Art Moscow, he expressed a belief that the market for modern art was growing and developing in Russia, a view that is not shared by many gallery owners and artists. As evidence, Backstein cited the recent auctions held by the Vladey Auction House, a project started by gallery owner Vladimir Ovcharenko.

While other entrepreneurs and auction houses had shied away from the Russia market even before the recession, Vladey's first two auctions have enjoyed notable success, with their fall auction selling nearly three quarters of the lots and bringing in 1.3 million euros ($1.8 million). Events like this show that there is a market for contemporary art in Russia, Backstein said, though it may not feel the same as the market in the West.

In the same vein, Backstein rejected the idea that Russian artists were leaving the country, noting that prominent Russian expat artists like Vadim Zakharov, Andrei Roiter and Ilya Kabakov all left the country shortly after the collapse of the Soviet Union. These days, young Russian artists frequently travel to Europe to study and exhibit work but are less likely to emigrate entirely, Backstein said.

Overall, Backstein was upbeat about the Moscow art scene and buzzed with energy describing his many upcoming projects. Unfortunately, he said it was too early to start thinking about the next Biennale, so it looks it is time for arts aficionados to turn their attention to other matters — at least until 2015.