July in St. Petersburg is all about movement on an international scale, with two back-to-back weeks of dance festivals. From July 1 to 7, as part of the Open Look International Festival of Modern Dance, contemporary dancers and teachers flock to the city from Europe, Israel and the United States to perform and lead workshops; from July 9 to 14, Russia’s most luminous ballet stars travel to Finland in a continuation of April’s Dance Open.

Despite the similarities in name, the two weeklong celebrations of dance represent opposite dynamics of the St. Petersburg dance scene. The Open Look International Festival of Modern Dance, now in its fifteenth year, makes its name by interjecting a contemporary element to the long-established classical dance tradition for which the city is world-renowned.

Festival director Vadim Kasparov created the Kannon Dance Jazz and Modern School with his wife Natalia in 1997. It immediately began blazing a trail for the development of modern dance in St. Petersburg.

The annual festival is a feat of organization and dedication, relying on months of planning and the support of over a dozen citywide partners to bring dance troupes and teachers from the United States, the Netherlands, Poland, Israel, France, Germany, Britain, Norway and Finland to St. Petersburg.

One of the festival’s main goals is to unite Russian dancers and audiences with some of the most innovative contemporary companies abroad. Dancers are taking to the stages of TYuZ, or the Theater of Young Spectators, New Holland, the Black Box Theater, Ploshchadka Skorohod and the Alexandrinsky Theater.

The festival kicked off with Monday’s Open Gala, which included a Teachers’ Gala in which international participants and members of the Kibbutz Dance Company performed original work.

“I’ve know Kibbutz for many years. I was trying to bring them all the time, but it was expensive, with travel. But this year I realized I had to develop the festival, and Kibbutz is a good example of a high-quality company,” Kasparov said.

Such an expansive event, of course, does not always pan out without a hitch. One of the teachers from Holland found out at the last minute that he wouldn’t get a visa and couldn’t make the festival. Kasparov made an emergency call to another teacher from Holland, a Brazilian citizen who does not need a visa, and the teacher agreed to cut short his holiday to come to St. Petersburg.

Kasparov also found another participating artist and teacher from Holland, Christian Guerematchi, during Dutch Dance Days. He liked Guerematchi’s style of movement and quickly began a conversation with the dancer about coming to St. Petersburg.

“All of my connections have happened like this. It’s about open people with open minds,” Kasparov said.

Dance doesn’t get more modern than in Raz’s work, which involves the translation of popular YouTube videos into the language of contemporary dance. The pieces stage reactions of YouTube videos, as well as showing the original videos. Ranging from funny to disturbing, the performances blend into the clips, which are projected on a large screen as the dancers leave and enter the stage.

“I find in digital culture something very inspiring,” Raz said in an introduction to the performance. “I decided not to be passive, but to do something creative with it — not on the computer, but on the stage, which is my territory.” 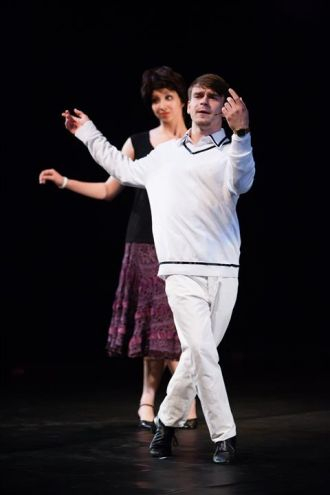 Each “remake” views a popular YouTube video through a different lens to raise questions about art, inspiration and today’s viewing culture. The works are not explicitly critical, but rather provocative, with the dynamics of sound and movement throwing the original video into a strange, new context.

One of the biggest points of Raz’s project is that it is simple enough to be recreated wherever the show goes, tailored to the dancers of that city. One “remake” that garnered an enthusiastic response in Monday’s performance involved a group of female dancers in flouncy dresses, who began a series of simple movements accompanied by “oohs” and “ahs” with exaggerated dainty femininity. Rearranging their formation, they began the same routine, but with played-up eroticism. The third time, the sounds and movements became earthier, almost tribal, and by the fourth round, the dancers were grunting, screeching and pounding their chests. The video then began to roll: “Le Haka des All Blacks,” the New Zealand rugby team’s pre-game, macho pump-up routine.

Audience engagement reached an even more visceral level when Kasparov turned the camera around to film the audience following along to a video of a chair Zumba routine to Shakira’s “Waka Waka.”

A sense of fun and freedom pervades the festival, despite the sometimes serious subject matter of the work. More than a series of workshops, Open Dance is about building an international community through the universal vocabulary of movement — while maintaining a personal connection.

“I wanted to create something different, especially for a Russian audience,” Kasparov explained. “Most people here tonight know somebody involved personally. They’re open-minded. I would like to make the festival about that.”

Israel’s Kibbutz Dance Company, one of the festival’s star participants, shares the philosophy of creating personal connections between dancers and viewers.

“Our artistic director, Rami Be’er, is a complete artist. He’s a choreographer, he also does the lighting and works with the musicians on the music. What he attempts to do in all of his work is to allow the viewer to take what he sees on stage and make it personal for himself, not try to make sense of it all,” said Yoni Avital, Kibbutz Dance’s international director.

The company had held a master class and auditions for its International Dance Village before the gala on Monday. On Tuesday evening, it performed “If At All,” a new full-length work themed around interpersonal relationships, at the Alexandrinsky Theater.

The company had already traveled to China, Canada, Spain, Italy, and India to perform “If At All” after premiering the piece the year before in Israel. The company has performed in Moscow several times, but this year’s Open Look festival was its St. Petersburg debut.

“We actually came to know of the festival through one of our dancers from here,” Avital said. “One of our dancers is from St. Petersburg. She grew up in Kannon Dance and joined our company three years ago.”

Despite the success of the festival, according to Kasparov modern dance still has a long way to go before it catches up with support for the city’s established ballet scene.

“It’s an old community that has been here, all together, professional people whose purpose is to work in contemporary dance,” Kasparov said. “But one drama theater here has 400 people, workers, actors, directors, whatever. So you cannot compare us with the ballet world and the drama world. We are like kids.”

While most of the festival’s sponsors are informational, by combining different sources of funding — from consulates, the city and a few main supporters — they are able to make the ambitious program a reality.

Open Look for Kids is also part of the week of modern movement, with classes for children who already have modern dance experience and those who don’t yet know the difference between “point” and “flex.” Master classes for kids will take place on July 7, part of the Open Dance Air day on New Holland. Also on the bill that day is a performance of the fruits of master classes held by visiting international teachers for Russian dancers.

The festival also includes Open Photo Look, a photo retrospective of the festival by its friends and partners, exhibited at the TYuZ throughout the festival. It is also partnering with Biblioteka, the city’s hippest food and culture combine, for its Open Kitchen segment: Cooking master classes of national dishes over discussions about modern art, dance and arts management. Culinary and choreographic artistry come together for these unusual classes, led by the festival’s visiting artists and company directors at Bibloteka on Nevsky from June 1-4.

Open Look is followed by another dance celebration: St. Petersburg-Savonlinna Ballet Days, a series of workshops and a ballet gala, Stars of the Summer Nights, that will take place from July 9 to 14 in Savonlinna, Finland. A continuation of St. Petersburg’s April Dance Open festival, the partnership between Russian and Finnish ballet dancers continues at the historic Olavinlinna Castle in Savonlinna, already home to an annual opera festival that has taken place for over a century.

Created to strengthen ties between Russian and South-Eastern Finland, free master classes for Finnish dancers led by Russia’s world-famous Vaganova Ballet Academy allow the country’s brightest talents to learn from the best. They will perform their own culminating, open-air performance in the city of Mikkeli on July 13, before attending the gala performance at the castle the next night.

From Open Look to the Dance Open, St. Petersburg continues to expand audience perspectives while evolving the most physical of art forms, both spreading Russia’s famous classical ballet tradition and providing a platform for the development of international dance.

View the full schedule of events and register for master classes at the Open Dance International Modern Dance Festival website, open-look.ru, or call 935-0313. Find tickets for the Savonlinna Ballet Days gala at savcorballet.com.