Russian media has found a way to give a positive twist to a new survey produced by the Pew Research Center reporting low trust in Russian President Vladimir Putin globally.

The Pew report published on Wednesday found that just 26 percent of respondents worldwide trust Putin’s foreign policy. Thirty-four percent said they have a “favorable view of Russia” overall, while 31 percent said they consider Russia to be “a major threat” to their country.

Pew introduced its report saying “publics worldwide [are] unfavorable toward Putin [and] Russia.” Russian media, however, had its own interpretation of the results.

Pro-Kremlin media, including Izvestia, Moskovsky Komsomolets and Komsomolskaya Pravda all reported only that “Putin’s popularity” had doubled among Republican-leaning Americans.

In its report, Pew noted “a partisan divide in views of Putin,” with only 13 percent of Americans who self-identified as Democrats feeling confident about the Russian leader, compared with 34 percent of Republicans. In 2015, those numbers were 20 percent and 17 percent. 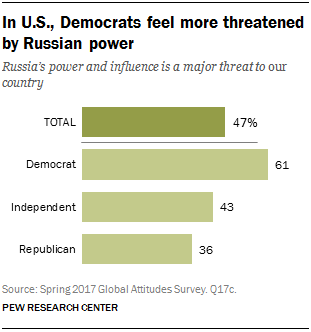 Other Russian media, focused instead on comparing Putin’s ratings to those of U.S. President Donald Trump, with the Federal News Agency (FAN), concluding: “The world trusts Putin more than Trump.”

The Pew report does show that confidence in Putin is higher than confidence in Trump in certain countries, including Greece, Lebanon and Germany. The Russian president is less popular, however, in Israel, India and Britain, among others. 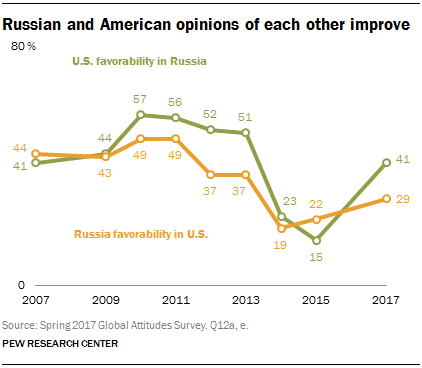 The report also shows that Americans are much less confident in Putin at 23 percent than Russians are about Trump — 53 percent. Those figures, however, did not make it into the Russian news reports.

The Pew survey was conducted among 40,951 respondents in 37 countries, excluding Russia, from Feb. 16 to May 8 this year.

‘A Ward Boss With Nukes’: Obama Unloads on Putin in New Memoir

The former U.S. president shared his unfiltered thoughts on Putin and Russia in his newly published memoir.
global confidence

U.S. television host Bill O’Reilly has refused to apologize to the Kremlin for calling Russian President Vladimir Putin “a killer.”