Krugozor was a Soviet literary and music magazine printed at the Pravda publishing house, where the new incarnation of Krugozor — a bar —recently opened.

Situated in a courtyard in the middle of the sprawling Pravda complex, it's about a 15-minute walk from the Belorusskaya metro station.

As with many of Moscow's hippest places, Krugozor is difficult to find. The publicized address, 3 Bumazhny Proezd, doesn't actually exist. Walk to building 2/2, turn left and pass through the gates.

Krugozor is the creation of Stereotactic, the team responsible for Outline festival and last summer's trendiest spot — the pop-up EMA bar. EMA had hints of Berlin's warehouse clubs and was housed in a dilapidated factory with silver colored insulation everywhere and a huge white disk called "the moon" — which served as the background for a record number of selfies.

Krugozor is both similar and different to EMA. It also occupies a former industrial space, but it feels less like an art installation, with not one but three stages and bars. One is located inside a three-walled building with a neon "bar" sign where you can listen to live music and enjoy one of the signature cocktails (from 420 rubles). 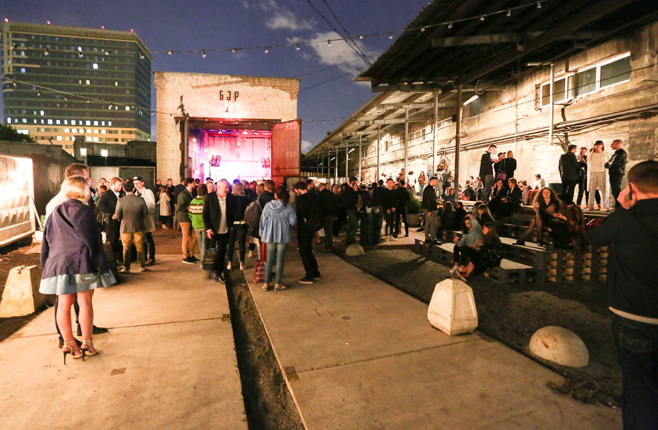 Behind the "bar" is a second dance floor with a platform overlooking the entire area. Explore further and you'll find the debarkader (loading dock) — home to all the major parties — and even a wine bar tucked between two buildings.

The company "Mestnaya Yeda" (Local Food), the organizer of regular street food markets over at the Museum of Moscow, is responsible for food. Stalls will change over the course of the summer. Currently, there's Ribs&Tips, which sells ribs with vegetables and their homemade sauce for 350 rubles and "Moy Bolshoy Grechesky Falafel" (My Big Greek Falafel) which serves pita bread sandwiches for 300 rubles.

Organizers promise a fresh fruit stall in the near future to up their hipster credentials. There is also talk of an educational program with lectures in a TED Talks format. The venue will be buzzing with events this summer so be sure to check their Facebook page regularly. It's a little bit of Kreuzberg in Moscow.