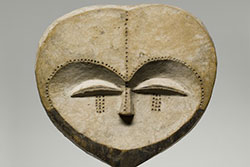 This exhibition, organized in collaboration with the Musee du quai Branly in Paris, displays more than 140 arts and crafts items from the early 20th century to the present day. The collection comes from the areas now located in Gabon, the Republic of Congo and the Democratic Republic of the Congo. Located on the ground floor of the Pushkin Museum's European and American Art Gallery, visitors also have the opportunity to see works influenced by African art from Andre Derain, Pablo Picasso, and Henri Matisse. Marina Loshak, director of the Pushkin Museum, said that the objective of the exhibition was "not to compare African art with European art. We wanted to plunge the viewer into this new world and then he can decide for himself what kind of art he prefers." 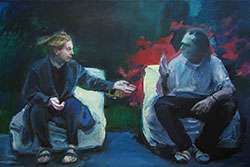 This exhibition is a first in more than one sense. It's the first exhibition housed at the Golitsyn Manor, the building that previously belonged to the Institute of Philosophy. It's also the first project of the Pushkin Museum's recently established Department of Film and Media Arts. 19 works by renowned artists such as Bruce Nauman, Bill Viola and Mona Hatoum are shown alongside up-and-coming Russian artists. Ivan Lungin photographs rusty walls beyond the Polar Circle, Elena Koptyaeva projects light from stairwell windows onto empty walls and Christa Sommerer and Laurent Mignonneau present a virtual water lily garden that interacts with visitors.

This new exhibition at the Multimedia Art Museum (MAMM) is devoted to the 55th anniversary of the first human spaceflight by Yury Gagarin. The exhibition traces the origins of Russian space exploration, from the 19th century philosopher Nikolai Fyodorov to the first theoretician of space travel, Konstantin Tsiolkovsky. Gagarin's reentry capsule is proudly displayed on the ground floor, while several other floors of MAMM feature drawings by Tsiolkovsky and artists from avant-gardist El Lissitzky to Ilya Kabakov and the Soviet nonconformism of the 1960-70s. The exhibition ends with contemporary art from the likes of Pavel Peperstein and Ivan Mikhaylov.

Borscht and Champagne at the Moscow Museum of Modern Art (MMOMA) is a must see contemporary art exhibition of works from the personal collection of Vladimir Ovcharenko, a key player on the Russian art market and the owner of one of the most successful Russian galleries, Regina. The exhibition features works by important Western artists as Richard Prince, Dana Schutz and Tracey Emin, as well as some of the best known Russian artists including Ilya Kabakov, Ivan Chuikov, Konstantin Zvezdochetov and ubiquitous Pavel Pepperstein. 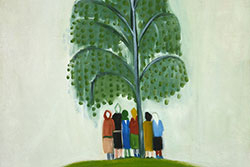 This is the first retrospective of such a scale for this prominent Russian painter. More than 90 works depicting various artists of the past and Zatulovskaya's contemporaries are shown at the exhibition, from icon painter Andrei Rublyov to nonconformist Timur Novikov. Zatulovskaya uses unorthodox media for her paintings: wood, metal, ceramic. Some of the portraits are surrounded by additional objects that add something to their character and reflect on the painter's work.