Contribute Today
By Andrei Muchnik
May 11, 2016

As the country slowly recovers from the long May holidays, so do the Moscow concert venues. This weekend offers you the perfect opportunity to sample different genres from the contemporary Russian music scene — from post-punk to academic music via folk-rock. Check out our selection below and you too can become a Russian music expert in just a couple of days.

Petlya Pristrastiya is a band from Belarus who have become quite popular on the Moscow scene. Petlya Pristrastiya means "Noose of Prejudice" and they play a mix of mainstream rock and post punk, which is often quite danceable. On Thursday they will present their fourth album, "Moda I Oblaka" (Fashion and Clouds), which was released just last month. Their previous album, "Phoebus," was named the best Russian language album of 2013 by Afisha magazine.

Although Tantsy Minus' peak of popularity was in the late 1990s and the early 2000s, Vyacheslav Petkun's band is still going strong. The groups's last album, "Kholodno" (Cold) was released in 2014. Come to their concert on Friday to check out their new material, as well as some of Petkun's greatest hits like "Gorod" ("City" — an ode to his hometown St. Petersburg) and the slightly cheesy "Polivinka" ("My other half"). 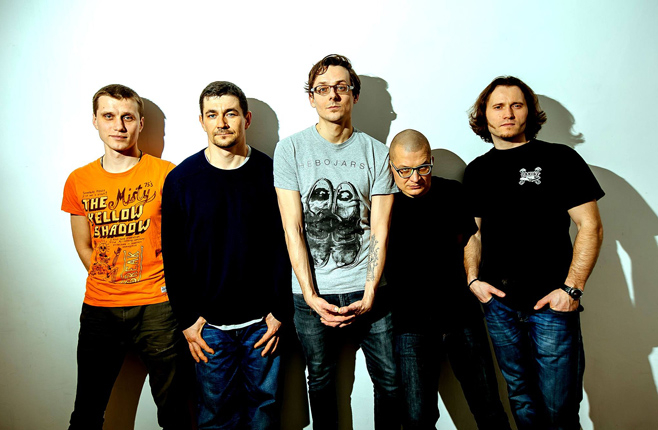 KDiMB is an acronym for the band's somewhat unwieldy actual name — Krasnoznamennaya Diviziya Imeni Moey Babushki (Red Banner Division Named After my Grandmother). Expect all 12 of KDiMB's members at their concert on Friday. Hailing from the Moscow suburbs KDIMB plays a mixture of folk, rock and even Afro-pop. This Friday's performance will feature hits from KDIMB's last album "Kiki," which was released last spring.

Contemporary academic music is becoming quite fashionable in Moscow. One of the leading young composers, Alexey Sysoev, who has written soundtracks for some of the Gogol Center and Stanislavsky Electrotheater performances, will present his new work this Friday at GROUND Khodynka gallery as part of the "New Clavier" series of concerts. His piece will be played along with that of fellow Russian composer Vladimir Gorlinsky and other established Western composers such as Franco Donatoni and Enno Poppe.

Yury Loza became famous in the 1980s after the release of his hit song "Plot" ("Raft"). "Plot" starts with a famous line "Na malenkom plotu" (On a little boat) which is known by heart by virtually every Russian alive today. Loza has experienced a sudden revival of popularity after his ridiculous comments about bands like The Rolling Stones and Led Zeppelin not knowing how to play. At his Sunday concert, expect a lot of hipsters who recently started to listen to Loza "ironically" as well as older "Plot" fans.

An interactive “Museum of Emotions” is about to open its doors in St.Petersburg, the gazeta.ru news website reported Tuesday.
essential reading

Ted Hall was 16 years old when in 1944 he was recruited as the youngest physicist for the Manhattan Project, the top-secret U.S. program to develop the...