Museums made out of the apartment or house of a celebrated personage are a wonderful thing — particularly if you love getting up close and personal with your favorite author or composer or fancy something cultural but don't have the time to tackle one of Moscow's larger museums. Invariably staffed by incredibly knowledgeable — if slightly intimidating — history enthusiasts, these museums are a great way to spend a rainy early spring afternoon. 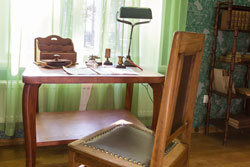 Communal apartment of a Soviet-era genius

Tsvetayeva is considered to be one of the greatest poets of 20th century Russian literature. She also had a tragic life: Her daughter died of starvation after a period in a state orphanage, she emigrated before returning to the Soviet Union where she was widely ostracized and she eventually committed suicide in 1941. But her poetry is acclaimed for its passionate lyricism. The Tsvetayeva house museum opened on the 100th anniversary of Tsvetayeva's birth after the intervention of the public and cultural figures to stop the building from being demolished. The museum now houses a collection of Tsvetayeva's possessions including photographs, poetry and books. 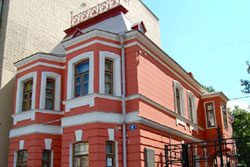 Experience life as a struggling writer

Chekhov's house on the Garden Ring is a vibrant red color, a feature he jokingly attributed his liberal thinking to in a letter to one of his acquaintances. The modest house gives you some impression of what life might have been like for the writer, who battled with both ill health and poor finances. Chekhov received patients at his house (he worked as a doctor to supplement his writing), although apparently only between the hours of noon and 3 p.m. to leave time for his creative exploits. Look out for the writer's desk and inkwell, as well as rare photographs of Chekhov and his friends and family. 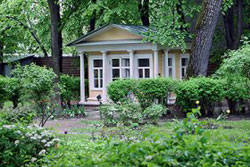 A peaceful retreat in the heart of the city

Tolstoy's winter residence is an island of calm in central Moscow. The author moved to the house in 1882 so that his children could benefit from better schooling, but the wooden structure and its surrounding garden hark back to a simpler, countryside lifestyle. Hints of the author's strict moral philosophy and simple aesthetic can be seen in the house, which despite its generous size had no electricity or running water. The desk where Tolstoy's wife Sofia transcribed his manuscripts and the reception room where the writer socialized with the likes of Rachmaninov provide a fascinating opportunity to soak in Tolstoy's legacy. 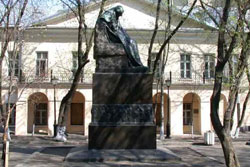 The Gogol House Museum on Nikitsky Bulvar is a unique architectural and cultural monument to the writer. Gogol worked on his second manuscript of Dead Souls in the house — a work intended to provide virtuous and moral characters to set an example to Russian readers after his darkly satirical first part. Frustrated by his efforts, he famously burned the work in the fireplace just before his death. You can still see the fireplace, along with items like Gogol's death mask and the last letter he wrote on his deathbed. The Gogol House Museum has made huge efforts to make itself as accessible as possible, with audio guides and touch-screen computers. 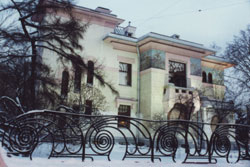 Even if you harbor lukewarm feelings toward Maxim Gorky, this astonishing Art Nouveau mansion on Malaya Nikitskaya is still definitely worth a visit. Purportedly gifted to Gorky by Stalin on the author's return to the Soviet Union, it was designed by the renowned architect Fyodor Shekhtel for banker Stepan Ryabushinsky. The most interesting feature is the magnificent marble staircase which climbs to the first floor like a sea wave. For someone who was such a proponent of the proletariat, Gorky lived out his life in the most lavish home. The walls are decorated with a mosaic frieze of the paradise garden, while stained glass windows filter in colorful light from the garden. Gorky's study provides a more personal insight into the author's life — you can see the original worn-down coloring pencils he used when marking his manuscripts. 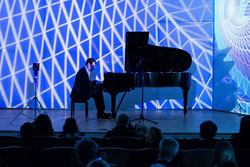 Step back in time to the Silver Age

The A. N. Scriabin Memorial Museum, situated in a handsome two-story mansion near Arbat, is particularly unique as house museum because its interior has been preserved just as it was in the early 20th century. Scriabin's home was even considered the cultural heart of Moscow at one time, due to the number of esteemed thinkers who gathered there. Alongside compositions, scores and Scriabin's personal effects, look out for the magnificent grand piano, which was made by Bechstein specifically for the composer. The house museum often hosts concerts and lectures in the evenings to support Scriabin's cultural legacy. 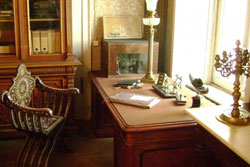 Peek behind the curtain of a theatrical genius

Konstantin Stanislavsky was a Russian actor and director, as well as creator of the Stanislavsky method, a precursor to method acting, which revolutionized modern theater. The story goes that Stanislavsky would often take his morning walks "in character," much to the amusement of passers-by. The impressive building on Leontyevsky Pereulok is where the Stanislavsky lived for 17 years with his wife Maria Lilina, an actress in the Moscow Art Theater. The house itself has been very well-preserved and visitors can see Stanislavsky's own private theater, costumes and even props from former productions on display.

A Family Affair at the Russian Union of Artists in Moscow

If you have a chance before the end of the week, stop in to see an unusual and fascinating exhibition at the Union of Artists on Ulitsa Pokrovka...
news

The Art Newspaper Russia Prize will be presented for the fourth consecutive year in Moscow on March 17. As opposed to state museums, this award is...
long read