If you fancy laughing through tears this Friday, head down to "Life, Rehearsed," a play by Peter Heavenheld premiering at the Art-Cafe Durov. The play's protagonist Daniel Nash, played by Jonathan Bex, is an actor so consumed by his art he finds himself struggling to juggle the conflicting commitments of his his love life, friendships, career and Hollywood aspirations. Don't we all?

This is the ideal event for all the Baltic states film buffs among you. And even if you don't count yourself in their ranks, when else are you going to catch an Estonian film festival? Top picks include "Tangerines," a film about the 1992-1993 war in Abkhazia, which was nominated for both an Oscar and Golden Globe last year, and "A Lady in Paris," featuring Jeanne Moreau. The festival will run from Thursday until Monday at the 35MM cinema.

Festival: From Venice to Moscow 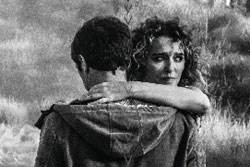 A taste of Italy

Wednesday is opening night of the city's sixth Italian film festival, "From Venice to Moscow," hosted at the Illuzion cinema. Highlights include "Per Amor Vostro," a film about a Neapolitan woman on the verge of a nervous breakdown, and the quirky documentary "Harry's Bar." If you're suffering from the Moscow blues, dreaming of the Mediterranean or simply love the sound of Italian, why not treat yourself to a "notte della cultura"?

An opera to get your pulse racing

Bizet's Spanish tragedy is perhaps the best-known opera in the world. Tuesday's performance will be a full-blooded revival of the French composer's vision, performed by a renowned international cast. Lithuanian soprano Justina Gringyte takes the role of Carmen, with Ukrainian tenor Dmitro Popov in the role of Don Jose. The ensemble will be directed by esteemed conductor Mikhail Simonyan. If you fancy a night of high-brow decadence and debauchery, look no further.

Muchnik's Picks: The Neighbourhood, Molly Nillson, Mana Island and More Music on the Weekend in Moscow

It's that time of the year in Moscow when one long weekend is just over and it's already time to get ready for the next. With several great bands from...
news

Los Angeles based street artist Alec Monopoly will hold a public lecture in Moscow on Thursday and paint a wall at the Winzavod Centre for Contemporary...
opinion Andrei Kolesnikov