Los Angeles based street artist Alec Monopoly will hold a public lecture in Moscow on Thursday and paint a wall at the Winzavod Centre for Contemporary Art on Tuesday and Friday as part of the Viber Sticky Fingers "My City, My Vibe" contest.

Alec Monopoly, an alias used to maintain the artist's anonymity, is best known for his reinvention of the childhood icon "The Monopoly Man" and various other pop culture figures including Richie Rich and Donald Duck. Sometimes called the American Banksy, he has also gained acclaim for his interpretations of celebrities including Madonna and Michael Jackson.

Monopoly began tagging walls in New York when he was still a teenager, but he rose to international fame during the economic crisis when people identified with the social commentary in his artwork. 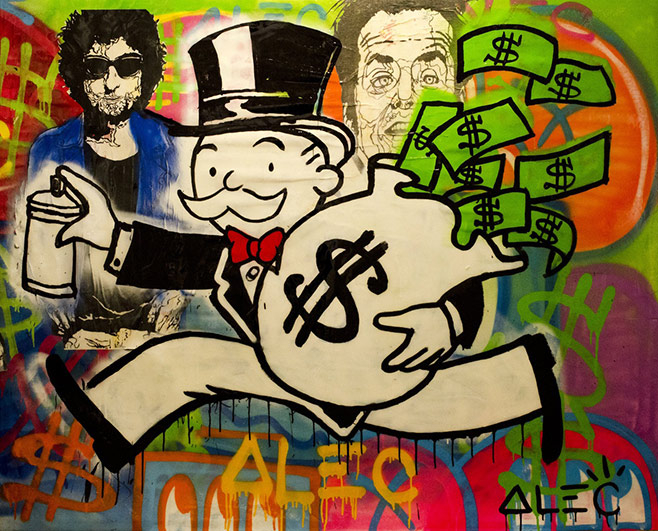 The Monopoly Man images caught something of the zeitgeist in the U.S. during the 2008 economic crisis.

In an interview about the Sticky Fingers initiative published by Talenthouse, which launched the Sticky Fingers competition, Alec commented on the public's perception of his artwork. "I started painting 'The Monopoly Man' in 2008 during the height of the economic recession, as a satire against capitalism. Richie Rich followed shortly after. The beauty of art is that people interpret it in their own way, and now I feel that my art has become more of a symbol of ambition and success and motivation."

For a non-traditional way to spend Defenders of the Homeland Day, head over to the Winzavod Centre for Contemporary Art. On Tuesday from 12:30 p.m to 4:30 p.m Monopoly will be painting a wall. He'll continue on Friday from noon to 4:00 p.m. All art enthusiasts are welcome to come and see him in action. 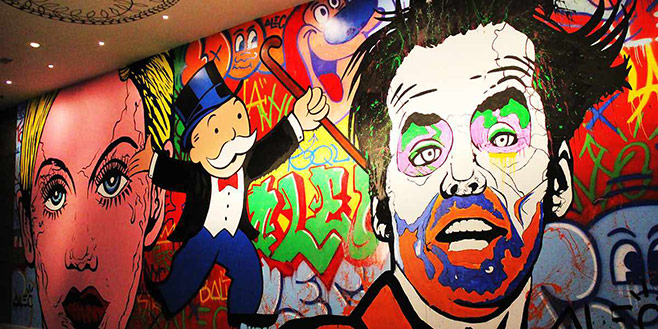 On Thursday at 7.p.m Monopoly will hold public interviews about his art and his involvement with the project at the DI Telegraph conference venue in the center of Moscow. He will also graffiti a canvas as part of the event. The DI Telegraph venue will be hosting an exhibition to showcase entries to the competition until March 3.

You can register for the public lecture on Thursday at ditelegraph.com/events/359. Public lecture held at DI Telegraph, 7 Tverskaya Ulitsa, enter via Gazetny Pereulok. Metro Okhotny Ryad.

Defender of the Homeland Day in Moscow's Parks

Across all of Moscow parks this Tuesday, a variety of events are taking place to mark the holiday, Defenders of the Homeland.
news

4 Men's Night Out Destinations in Moscow

A secluded spot in the city center entices drinkers with a remarkable whisky selection — over 200 varieties from a half dozen countries, to be enjoyed...
opinion Andrei Kolesnikov