What do you want to be when you grow up? This is the question that KidZania, a lavishly realized indoor city for children, asks the miniature workers who enter its doors. A worldwide franchise, it has just opened its first Russian branch at Moscow's Aviapark shopping center.

It is common knowledge that children love to copy adult behavior. At KidZania, this mimicry has become the inspiration for an "educational entertainment experience" which allows children aged between four and fourteen take the lead and try their hand at professions ranging from hairdressing to television production, and everything in between.

It's clear that the children here are having a ball with their borrowed independence. Free from overly-cosseting parents, they can visit the beauty salon, catch a show at a scaled-down replica of the Bolshoi Theater or buy an ice-cream in the city square. Brands like LG, Baskin-Robbins and Russian supermarket chain Perekryostok have come on board as partners with KidZania, offering children the chance to become secret agents, confectionists and cashiers respectively.

Katya, 5, has come to KidZania with her grandmother and older sister. "I really like it here. My favorite part was learning to pull out a tooth," she says enthusiastically, clutching a travel-sized toothpaste that she was awarded for her time in the dentist surgery. Her grandmother, Yelena, is similarly enamored. "It's nice to be able to give them some independence but know that they're in a safe place. No parents or grandparents are allowed in the actual shops so we just watch them having fun through the window. It's good to be stopped from interfering sometimes." 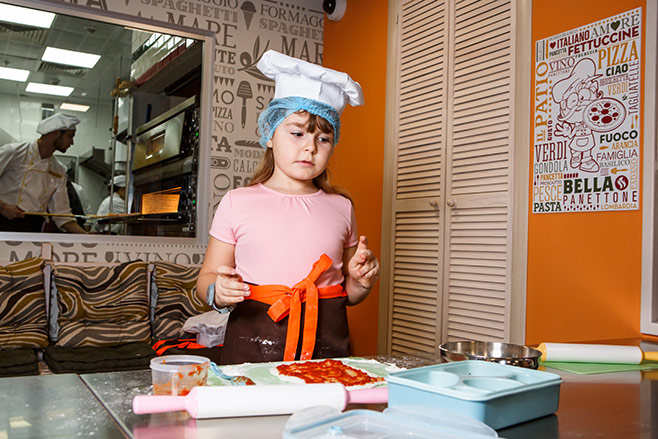 A budding chef makes a pizza in the restaurant kitchen. Once prepared, it will be cooked by the supervisor.

So mammoth is KidZania — the Moscow branch is 10,000 square meters, or almost 110,000 square feet — it even has its own internal currency, the kidZo. Upon entry the first stop is a child-size branch of Alfa Bank, where children deposit their check. They can either withdraw kidZo currency in cash or start spending on a personalized KidZania debit card. Debt does not exist in KidZania, but while all children receive a set amount of kidZo's at the beginning of their session, this sum can be supplemented by working one of the jobs onsite — just like in the real world.

The independence trumpeted by KidZania extends to children with special needs. Supervisors facilitating the role-play scenarios in the city have received training which allows them to accommodate all children, regardless of disability, into the KidZania experience. "The Naked Hearts Foundation helped KidZania to create a fully inclusive environment for children and adults," Ksenia Korneyeva, Moscow Head of Public Relations for KidZania, told The Moscow Times. The Moscow branch has already been visited by a group of children with hearing difficulties, as well as children with severe autism and children in wheelchairs.

"The wonderful thing about KidZania is that it doesn't identify as being in Moscow or even Russia. It's its own world — just for children," Ksenia continued when asked about a potential language barrier for youngsters who may not be Russian-speaking.

At this moment our conversation is interrupted by the sound of sirens and shrieks of delight. A school group kitted out in firefighter uniforms are speeding past in a miniature, but highly realistic fire engine — they're off to put out a blaze somewhere across the city. Later this year a space center will open with the support of the Russian Space Agency, where children will be able to experience life as an astronaut. 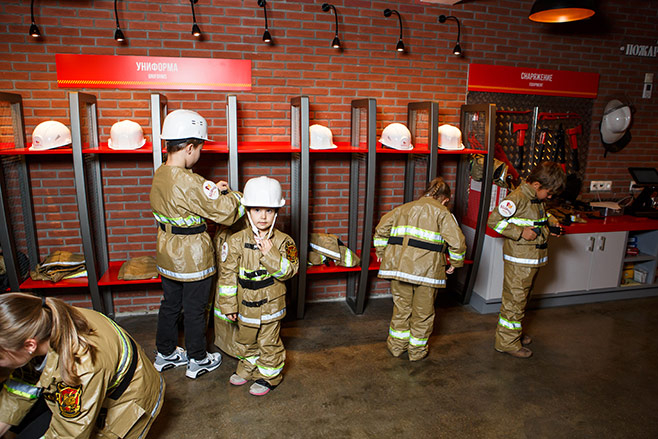 The Fire Department, along with Pochta Rossiya (Russian Mail), is one of the most popular spots in KidZania.

While their children are treating dummy patients at the ambulance station or delivering letters for Pochta Rossiya (Russia Mail), parents can indulge in some me-time. For those with children under seven there is an onsite parent lounge where you can sit with a coffee and watch your child in action from a mezzanine balcony. Kids over seven and you're free to leave them in the hands of the KidZania staff as you wander around Aviapark and finish your shopping. There are several KidZania sessions each day which last four hours, with prices ranging from 1,200 rubles on a weekday to 1,500 rubles at the weekend.

Olga has chosen to stay with her son Fadel, who at 11, is towards the older end of the children in KidZania. "Fadel is usually very shy so I chose to stay with him, but it's been really delightful to watch him participate in so many different activities. He even chose to be a pilot — which is a surprise considering he is terrified of flying." Fadel emerges from the city newspaper office carrying a by-lined article he has been working on. "Come on, Mom!" he says, tugging her further into the complex.

KidZania is already hugely popular with children and adults around the world. If the enthusiastic smiles of those in the Aviapark franchise are anything to go by, the Moscow branch will be no different.

If you're working on a Russian schedule, this will be a long weekend, but a weekend that will only start on Saturday night. This holiday weekend marks...
news

How do I learn to eat ice cream when it's -15°C? Where can I recycle my pile of old TMT editions?

Ted Hall was 16 years old when in 1944 he was recruited as the youngest physicist for the Manhattan Project, the top-secret U.S. program to develop the...