Painter, sculptor, writer, actor and film director Rezo Gabriadze is perhaps best known for his Tbilisi-based Marionette theatre. Frustrated at the constraints on individual creativity during the 1980s, he decided to use puppet theater to communicate his stories. The multimedia and puppet exhibition will involve more than 600 of the artist's works and paintings displayed through projections and animations, live performances and film. Until March. 20.

Exhibition of a true master

Starting out as a painter in the 1950s, Salakhov largely adhered to a Soviet Realist aesthetic in his artwork. Yet his paintings subtly subverted the notion that life was perfect in the Soviet Union. His grittier style was later termed Severe Socialist Realism. Born in Baku, he often drew creative inspiration from his native Azerbaijan. The Tretyakov will showcase his works from the Soviet era to the present. Until March 20. 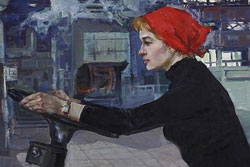 The wheels of progress

Coming to Russia after a run at the Palazzo delle Esposizioni in Rome, this exhibition displays more than 60 paintings which demonstrate how transportation entered the everyday lives of people during Soviet times. Cars, planes and trains take on a higher significance in many of the pictures, symbolizing man's ability to traverse nature. Until May 22.

Aleksandr Gerasimov is known as creator of the Socialist Realist canon. His heroic portraits of revolutionary leaders such as Lenin are instantly recognizable. While Gerasimov has been harshly criticized for his overly fawning depictions of life in the Soviet Union and the country's leaders, he never lost touch with his genuine creative talent and his skillful ability to capture light and movement. This is the first monographic exhibition of the artist's work in over 50 years. Look out for the enormous Gimn Oktyabryu (Hymn to October) canvas which won Gerasimov the second of his four Stalin prizes. Exhibition runs until April 11.

Live in Russia? Love British Literature? This is the Year for You

Russia’s reputation as a country built on strong literary traditions is to be strengthened this year through its collaboration with the British Council...
news