Moscow just closed the curtains on the third international festival of contemporary choreography and dance, "Context. Diana Vishneva." Performances from leading international dance companies from Argentina, Holland, Israel and the United States took place at various venues around the city.

During the festival, the audience could also attend screenings of the best films from the International San Francisco Dance Film Festival. A series of lectures, master classes and presentations were also included in the packed schedule. This year the festival was held in honor of Maya Plisetskaya, the world renowned ballet dancer and trustee of the previous two festivals who died on May 2.

Among the most noteworthy performances in a schedule filled with illustrious dance companies and performances were works by the Argentinian Brenda Angiel Aerial Dance Company, in Russia for the first time, and a show of new work from the celebrated Israeli choreographer Itzik Galili. Russian ballerina Diana Vishneva, who established the festival in 2013, debuted the piece "Live" by acclaimed Dutch choreographer Hans Van Manen to mark the opening and closing of the festival.

"Classical ballet in Russia has a long tradition, but the the history of modern dance is being written in the here and now," said festival founder Diana Vishneva. "Our festival aims to show the best there is in the world of contemporary choreography, and the main thing is to help talented Russian directors establish their place on the world stage and include Russia in the context of the world of contemporary dance."

Diana Vishneva is one of most famous and celebrated dancers in Russia and the world. She is a prima ballerina at the Mariinsky Theater, principal dancer of the American Ballet Theater, and is now the founder and ideological inspiration for the festival "Context. Diana Vishneva." In 1995 she graduated from the Academy of Russian Ballet and in 1996 debuted at the Bolshoi Theater, where she continues to appear as a guest ballerina. Although trained in the classical art of Russian ballet, Vishneva is interested in expanding the creative boundaries of Russian dance. "Context" is part of her plan to support and nurture young choreographers and introduce audiences to the full range of contemporary dance. 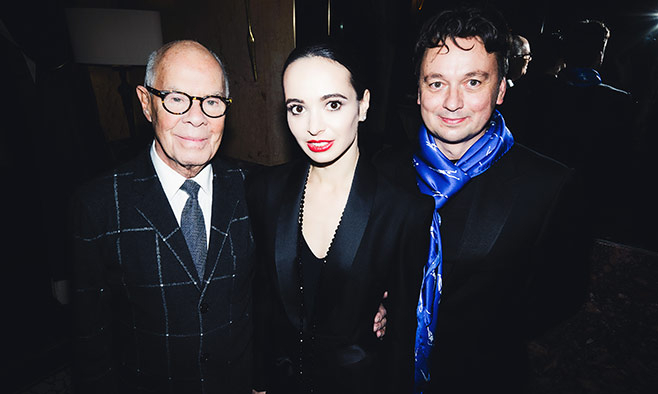 Courtesy of the festival organizers

Samuel Wuersten, director of the Holland Dance Festival and co-director of Context, with dancer and director Diana Vishneva and choreographer Hans Van Manen.

Vishneva's career has brought her numerous awards and prizes, including the People's Artist of Russia Award, six Golden Masks and the Ballerina of the Decade Prize. In 2010 she established the Diana Vishneva Foundation, a cultural charity that works in Russia, the United States and Japan to increase access to ballet for all social classes, promote it as a modern art form, establish new dance projects and provide financial support to young and retired performers.

Samuel Wuersten, artistic and general director of the renowned Holland Dance Festival and co-director of "Context" with Diana Vishneva since 2013, said in an interview to The Moscow Times that working with Vishneva was "in a nutshell — wonderful! For someone like myself whose main theme in life is to share my passion for dance, it is such a pleasure and a privilege to work with someone as passionate and as gifted as Diana. She is very authentic and full of integrity, no nonsense, no falsities. Just a very accomplished and great artist."

Classical art forms, especially ballet, are the global cultural trademarks of Russia. But "Context" aims to change this stereotype. The Moscow Times caught up with Samuel Wuersten and asked him how he saw the future of Russian dance. He said that the festival has been met well by the Russian audience despite his initial apprehension. "I was curious as to how the Russian public would react to our program. You never quite know beforehand. It feels a bit like having people over for dinner and cooking for them! But from the two previous festivals I can safely conclude that lots of people came over for dinner … and loved what we served up."

Wuersten certainly believes that Russia is ready to embrace contemporary forms and sees the country's passion embodied in the spirit of his colleague. "Having Diana set the tone as a true ambassador of dance is an invaluable endorsement. She is full of curiosity when it comes to exploiting dance. On stage she is a magnificent adventurer. Off stage, she is passionate, inquisitive and open minded."

And the Winner Is...

The key event of the festival was a competition of young Russian choreographers on the stage of the Stanislavsky Electrotheatre. There were six participants in the final, and the winner was Konstantin Semyonov whose piece, "Forgotten Sacrifices" won over the jury. Semyonov dances in the corps de ballet of the Stanislavsky and Nemirovich-Danchenko Musical Theater, and this was not his first work as a choreographer. He will receive an internship in the Center of Choreographic Development, which is located in Carolyn Carlson's Atelier de Paris in France.