Last week the Jagermeister Indie Awards (JIA) ceremony was held in Moscow for the second time. Since the Stepnoi Volk (Steppenwolfe) awards were cancelled this year, JIA were the only independent music awards in Russia.

High profile nominees and surprise collaborations, as well as a headliner from California ensured attendance not just by journalists and industry representatives, but music lovers as well.

The ceremony was held at Konstruktor, a recently opened venue in what might become a new cultural cluster in yet another former industrial zone. This time it is on the territory of the Badayevsky beer factory on the banks of the Moscow River by the Hotel Ukraina.

The crowd was mixed, but largely fell in one of the two categories: glamorous golden youth and the new breed of hipster who looks like early 1990s rockers. Free Jagermeister shots and trendy "Buterbro" sandwiches at the entrance helped raise the mood. Oleg Garkusha, one of the co-founders of Auktyon band from St. Petersburg, which has been playing for almost forty years, was the event's host. 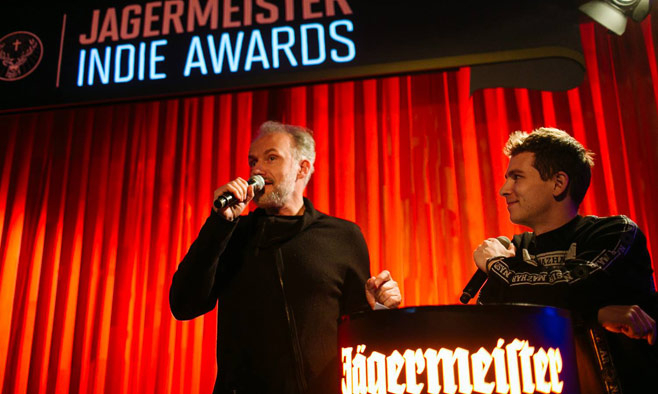 Modeled on the Jagermeister Independent Music Awards that have been running in Australia for a decade, JIA had a traditional list of nominations: rock, hip-hop, electronic music. There is also a special Young Blood award for the best new band chosen first by online voting and then by experts headed by Mumy Troll's front man Ilya Lagutenko and prominent music critic Artemy Troitsky. This award went to up-and-coming artist Sirotkin, whose music can best described as a cross between folk and neo-R&B. A sub-category of Young Blood, the People's Choice award went to a young musician from Sebastopol, Crimea — Hann With a Gun.

Before the ceremony the organizers had announced that there would be surprise collaborations during the night. The first one was a performance by last year's Young Blood award winner, Oligarkh, and one of the pioneers of Russian hip-hop, Legalize, who is making a come back this year with a brand new album.

Another collaboration was Sergey Letov, one of the Russian rock veterans playing on the saxophone with post-punk band Glintshake, who recently announced a switch from singing in English to Russian. Their Russian lyrics turned out to be just as incomprehensible as their English, but there is so much drive in their music that it hardly matters.

The hip-hop act of the year award went to the rappers Krovostok, famous for their explicit lyrics. Since Krovostok just won a court case in Yaroslavl against the local administration, which was trying to ban their music, the award was for freedom of expression as much as for music.

The rock band of the year award went to The Jack Wood, which collaborated with Pussy Riot and performed at the Glastonbury Festival in England last year. Electronic band of the year was awarded to Mujuice, who recently released a new album.

The best band of the year went to relative newcomers Pinkshinyultrablast.

The video prize was awarded to Russia's most popular indie-rockers, Pompeya. Their video "Liar" depicts a 1990s mob gathering in a nightclub that turns into a massacre, reminiscent of the "Brat" movies.

The single of the year went to "I Believe in You," a new song by the cult Ukrainian duo 5'nizza, the first in ten years, which reunited this summer for a brief concert tour.

The headliner, Ariel Pink from California, psychedelic pop and lo-fi pioneer, performed at the very end, playing mostly songs from his latest album "Pom Pom." Unfortunately half of the audience left by that point. It was their loss; Ariel Pink's performance was great.