Sisters Alisa and Julia Ruban give new meaning to the phrase "sister act." Their RUBAN line, which they began in 2010, has been steadily gaining attention in the Russian and international fashion world — not to mention admiration from celebrities such as actresses Anna Mikhalkova, Anna Chipovskaya and Darya Veledeyeva, the editor-in-chief of Harper's Bazaar Russia.

Since 2013 their collections have been available online through Moda Operandi, a luxury virtual retailer, which has registered RUBAN's highest sales in the U.S. and U.K. Plans to expand to Europe are on the horizon, and they are considering a collaboration in Asia, too. The sisters have their own showroom in central Moscow where the public can shop their ready-to-wear collection or place private orders for the high-end line. This month RUBAN is being sponsored by , an initiative to create a link between the KIA automotive brand and Russian culture. The Moscow Times recently caught up with the sisters and president of KIA Motors Rus, Seong Hwan Kim, to talk about their brands, the Russian art scene, and their future aspirations.

Before 2010 both sisters had successful careers as stylists for high-profile Ukrainian and Russian magazines. However, a longing to create their own pieces instead of working with the designs of others planted the seed for the RUBAN line. "We were working as stylists for a long time," they told The Moscow Times, "But even back then we were so interested in fashion that we wanted to find something different from everything else we saw around us. That's why we created clothes ourselves."

It was a lucky chance during Paris Fashion Week that propelled their career change. Alisa was wearing her own designs, and the media and style bloggers took notice. Their positive reaction gave Alisa confidence, but that wasn't the determining factor. "What happened in Paris was some kind of a sign. But if it had not happened there, it would have happened eventually, maybe even in Moscow. Becoming a designer was just a logical continuation for me," Alisa said.

The Ruban sisters are proof that design and innovation require no instruction. Neither sister had any formal education in fashion design, but this, in their opinion, was in no way a barrier. In fact, they think the opposite is true. Their lack of design education means that they are not constrained in any way. "Some of our more popular pieces were pieces that we were told were impossible to make after we designed them. But our team had to figure out how to do it, and so they did. Our lack of training means we are not afraid to push the limits."

Their collections are structured, feminine and innovative. Produced in Moscow, the only thing about the collection that is not Russian is the fabric, all of which is sourced in Italy. The finest cashmeres, silks and organzas are used and details to the garments are all sewn by hand. It's a true luxury fashion brand from the heart of Moscow. 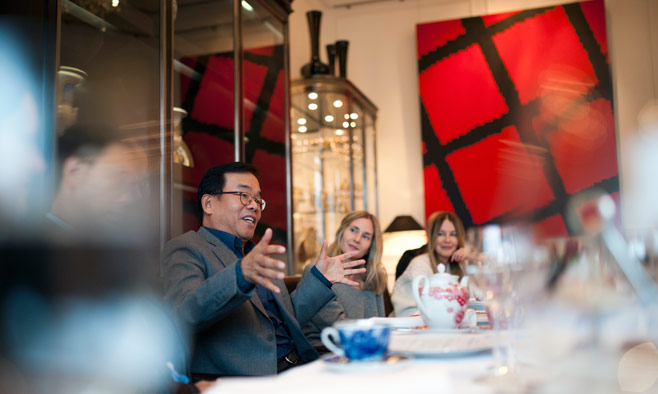 Alisa and Julia, like all siblings, have disputes. For them, working together can get tricky, but they use their creative differences to improve. "To tell you the truth," Alisa said, "it is not always easy to collaborate. But when we have to work together, we learn how to do it in the best way. Our distinctions play to our advantage. Not everybody has the opportunity to look at one task from two completely different perspectives."

Although they are sisters and have followed the same career paths, Julia is more financially savvy while Alisa takes the lead on the creative process. Together these traits make for a well-oiled and successful business. "Since the beginning, Julia has worked on the commercial side and I have been more involved in the creative process," Alisa said. "We have finally found a way to manage both these sides and now Julia has her own commercial line called Pe while I am the chief designer of the RUBAN collection." Julia's focus is clear. Her favorite designers are Dolce & Gabbana, "because they know how to make money."

As children, the sisters were not always close, but see their upbringing as the key to their relationship now. "It's not upbringing exactly, but the family cohesion, which we felt from early childhood. There were some moments back in our awkward stage when we were not that close, but that didn't last long. We've always been together and pushed each other toward interesting things. That is why one profession for two of us is an absolutely logical result."

This year the KIA Quoris Art project of KIA Motors Rus is the main sponsor for RUBAN's latest show. The project was begun in 2012 along with the launch of the new KIA Quoris to create a link between the car model and the Russian arts. Seong Hwan Kim, president of KIA Motors Rus, told The Moscow Times that the Ruban sisters were a perfect fit for the project because "like the new RUBAN collection, the exterior and interior design of the new KIA Quoris combines sophistication, unique styling, urban dynamism and the creative energy of modern citizens."

Alisa and Julia feel hugely positive about their new partner. "We've been looking for a long time for the partner for our fashion show. KIA is the brand that suits us perfectly. We really like that they support Russian modern art and fashion."