Another theater season bites the dust.
And, therefore, wrap it up again we must.
For three and twenty years without a break
The Moscow Times has listed what is great
Or maybe less,
But worth a dwell
To test our dares
And quell our cares.
And so, for now,
'Til autumn comes,
It's Fare-thee-well!

Sign of the Times: an unnamed woman shouting "Bring back 'Tannhauser'!" when Russian Culture Minister Vladimir Medinsky appeared on stage at the Golden Mask Festival award ceremonies in April. Medinsky moved against a controversial production of "Tannhauser" at the Novosibirsk Theater of Opera and Ballet in February, leading to the show's ban, and to an increased chill in the already cold cultural atmosphere. The heckler, whose outburst evoked a thunderous ovation from the crowd, epitomized the outrage that the theater community felt about Medinsky's actions.

Trend of the Year: Theaters throwing down the gauntlet before spectators. In "Boris Godunov" at the Lenkom Theater, director Konstantin Bogomolov "corrected" Pushkin's original text to declare that "the people are scum." At the Satirikon before every performance of Vladimir Zaitsev's "All Shades of Blue," about a gay teenager's coming-of-age, Konstantin Raikin ran a recording that challenged spectators to remember they were part of a cultural elite and should behave as such. In the cabaret "19.14" at the Moscow Art Theater, the emcee began with five minutes of insulting jokes, his purpose being to resensitize an audience desensitized by contemporary trends of hostile public discourse. In "Revolt" at Praktika, director Yury Muravitsky put on a play that mercilessly attacked its audience's sense of comfort. Theater often sought to wake people up this season.

Farce of the Year: Moscow's relentless persecution of Teatr.doc. It drove them out of one home in December, then out of another in June. The explanations were, frankly, asinine: supposed violations of fire and renovation codes, bookkeeping irregularities and other nonsense. In fact, the authorities didn't like Doc mounting artistic discussions of such topics as Kiev's Maidan revolt and the infamous state crackdown on peaceful protesters on Bolotnaya Square on May 6, 2012.

Incongruous Accomplishment: Ksenia Sobchak's starring role in "The Marriage" at the Theater of Nations. There is no way this controversial political journalist should have been so good, so nuanced and so genuinely funny as the matchmaker in Nikolai Gogol's classic comedy. But she was. 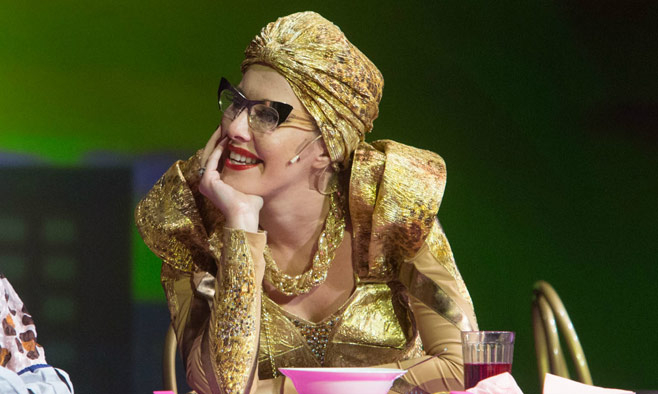 Ksenia Sobchak wowed audiences as the Matchmaker in "The Marriage."

Best Actress: Yekaterina Kramzina, in Mikhail Bulgakov's "Flight" at the Vakhtangov Theater. Her character of Serafima, a refugee from Russia's Civil War, was excellent throughout the four-hour show, but that first half-hour of her sitting motionless on a chair until she began shaking and shuddering from fear and anger simply blew me and other spectators away. When she stood to leave, the crowd gave her the kind of rousing ovation that is rarely seen in the middle of a performance.

Best Actors: Filipp Avdeyev and Alexei Agranovich in Ivan Goncharov's "A Common Story" at the Gogol Center. It is a fact that excellence in acting is aided greatly by a great acting partner. Avdeyev's young, innocent country bumpkin could never have had the same impact without Agranovich providing him with such a cold, evil foil. And you can turn that sentence around in the other direction with equal success.

Perfect Pair: Vyacheslav Yevlantyev and Yevgenia Gromova as the put-upon husband and wife in Sergei Zhenovach's sensitive production of Nikolai Erdman's tragic farce "The Suicide" at the Studio of Theatrical Art. The pair was achingly sweet and innocent, making the pain they experienced when their neighbors plotted to exploit them all the more tragic.

The Beauty of Hell: Maxim Didenko's production of "Red Cavalry," based on Isaac Babel's stories about the Russian Civil War, for the Dmitry Brusnikin Workshop. This song, dance and installation performance found both bitter beauty and evil in the hell that is war.

Wordless Wonder No. 1: Sergei Zemlyansky's dance interpretation of "The Inspector General" at the Yermolova Theater. Who would have thought you could toss out all of Gogol's words and still have the whole story? This was fun, attractive, energetic and funny. 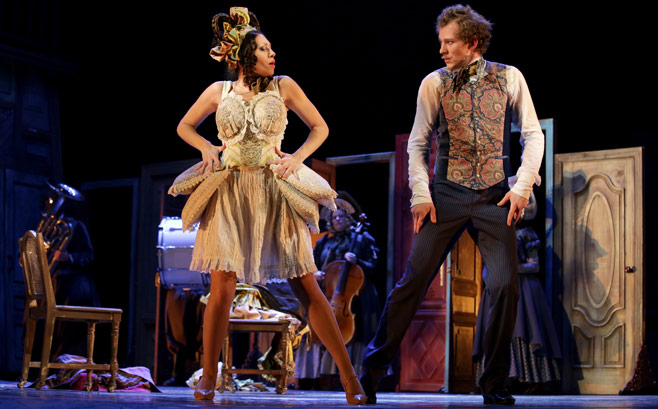 Sergei Zemlyansky's version of "The Inspector General" at the Yermolova.

Recalibrated Classic: Konstantin Bogomolov's production of "Boris Godunov" at the Lenkom Theater retold Pushkin's portrayal of 17th-century court intrigues as if it were news coming through a contemporary television screen. It was clever, funny and devastating.

Best Production: Yury Butusov's production of "Flight" at the Vakhtangov Theater. Butusov is a forest fire of a director. His interpretation of Mikhail Bulgakov's Civil War drama burned white hot from beginning to end.

Sui generis: Dmitry Krymov, in a class by himself. His production of "Oh, Late Love" at the School of Dramatic Art showed us Alexander Ostrovsky as we have never seen him, while making the 19th-century author look like our contemporary. Kyrmov's eclectic, ironic, visuals-driven theater keeps getting better.

In the Line of Fire: Kama Ginkas' interpretation of "Who's Afraid of Virginia Woolf?" at the Theater Yunogo Zritelya. Ginkas put spectators in the thick of the epic battles taking place in Edward Albee's famous play about the ties that do and do not bind human relationships.

Avant-Kitsch: Robert Wilson's "Pushkin's Fairy Tales" at the Theater of Nations. Whether you thought this show was a startling visual feast or a misguided comic strip of Russian folk cliches, you had to agree: the great Wilson working in Moscow was good for everybody. 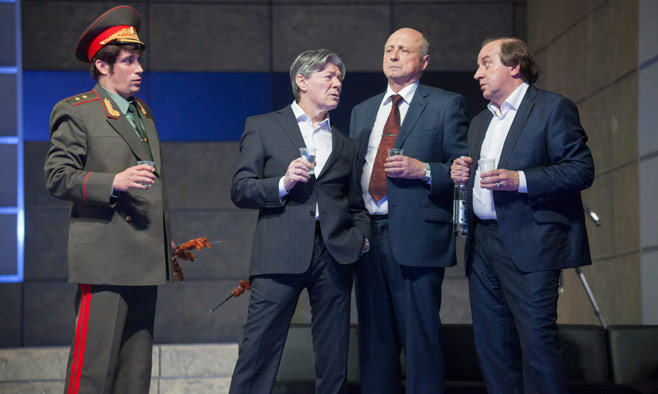 Solemn Farewell: to Yury Lyubimov, founder of the legendary Taganka Theater, who died at the age of 97 on Oct. 5, 2014. On that day we lost one of Russian theater's all-time greats.

Theater of the Year: Boris Yukhananov's Stanislavsky Electrotheater. It took a year and a half of rebuilding, reorganization and renaming for the moribund old Stanislavsky Drama Theater to become the spectacular new Electrotheater. Yukhananov unveiled two beautiful, unorthodox "serial" productions — "The Blue Bird" in three nights, and "Drillalians/Sverliitsy" in five — as well as turning his stage over to foreign masters Theodoros Terzopoulos and Romeo Castellucci, all while making this the coolest new venue in town.

Profile in Courage: Yelena Gremina, playwright, director, managing director of Teatr.doc. This replaces my usual Person of the Year award. Gremina is more than just Woman of the Year. Her sense of dignity, strength, perseverance, humor, justice and social responsibility in the face of massive attacks against her Teatr.doc by the authorities this season was epic.