This year's 15th International Tchaikovsky Competition came to an end on Thursday and Friday evenings with successive gala concerts in its two host cities, Moscow and St. Petersburg. Taking part in one or both concerts were most of the competition's prize winners, accompanied in each case by the orchestra of St. Petersburg's Mariinsky Theater under the baton of Mariinsky general and artistic director, as well as co-chairman of the competition's organizing committee, Valery Gergiyev.

Despite some outstanding winners in violin, cello and voice, especially during the Soviet era, the competition's principal contest has always been that of its pianists. This year's competition proved no exception. Moreover, the group of six that emerged as piano finalists was probably the strongest of any in post-Soviet times. Indeed, every one of them seemed a possible candidate for first prize.

Going into the piano contest, which was held in Moscow, the favorite for top honors was Lukas Geniusas, 24, a popular figure among local music lovers and designated as representing both Lithuania and Russia. But in the critical final round, he followed up a truly brilliant account of Pyotr Tchaikovsky's Piano Concerto No. 2 with an understated and rather dull performance of Sergei Rachmaninov's virtuoso Piano Concerto No. 3.

First prize went instead to a virtual unknown hereabouts, 27-year-old Dmitry Masleyev. Though a graduate of the Moscow Conservatory, Masleyev has largely pursued his career in Italy, where he is now an intern at the Lake Como International Piano Academy. Displaying great dexterity and a musical sensibility all too rare among present-day Russian pianists, he produced an utterly phenomenal performance of Sergei Prokofiev's Piano Concerto No. 3.

Audience favorite among the finalists was Frenchman Lucas Debargue, 24, who showed uncommon technical capability and outstanding sensitivity throughout the competition, but was relegated to fourth and final place. As a measure of compensation, however, he received the special prize awarded by the Moscow Music Critics Association, as a result of which he is due to return to Moscow for a concert in December.

The cello contest, held in St. Petersburg, came up as usual with a strong and diverse group of contenders, eight from Russia and 17 representing 12 countries of Europe, Asia and the Americas. Favored to win was Moscow cellist Alexander Buzlov, 31. But Buzlov's elegant playing was overshadowed by the startling virtuosity of 20-year-old Romanian Andrei Ionut Ionita. Ionita took first prize, Buzlov the third. 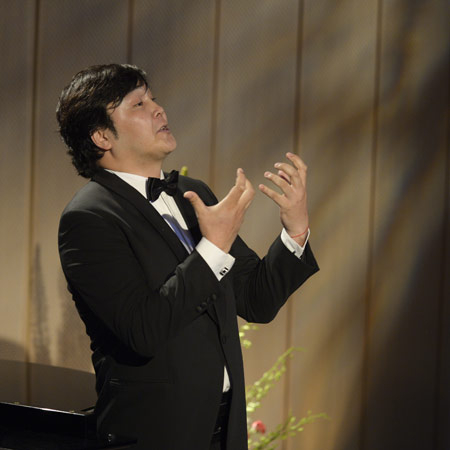 A baritone from Mongolia, Ariunbaatar Ganbaatar, won the grand prize.

The competition's violin contest once produced with such outstanding winners as Viktor Tretyakov and Gidon Kremer. But the six contests held since 1994 have failed to come up with talent even approaching that level, and in three of the six cases, including this year's, the jury has declined to award a first prize. What I heard of the violinists, who competed in Moscow, was of generally good quality, but hardly exciting.

This year's vocal contest, held in St. Petersburg, was dominated by Russians — 24 of them among its 40 contestants — and proved nearly as mediocre as the contest of 2011. Perhaps it no longer really belongs in the Tchaikovsky Competition.

The competition's biggest surprise occurred with the award of the competition's Grand Prize following Friday's gala concert in St. Petersburg. Carrying with it the whopping sum of $100,000, the award was available to be given, or not given, presumably by the combined juries, to one of the first-prize winners.

Either Masleyev or Ionita seemed the likely possible winner. But instead, the award went to Mongolian baritone Ariunbaatar Ganbaatar, 27, who took first prize for male singers in the vocal contest.

From what I heard and saw of Ganbaatar, in person at the Moscow gala and via the Internet, he possesses quite a powerful, smooth and well-tutored voice, together with a very winning manner on stage. But the pair of familiar arias he sang, one from Gioachino Rossini's The Barber of Seville," the other from Tchaikovsky's "The Queen of Spades," I have on many occasions heard sung much more sensitively and idiomatically.

Surely, Ganbaatar could not have been picked by the juries, each of which was fully occupied with its own particular contest throughout the competition and many of whose members scattered to the four winds soon after the close of the awards ceremony last Wednesday. Whoever in fact made the choice, it struck me as possibly more a political than an artistic decision, perhaps meant to boost Russian-Mongolian relations or give the Mongolian economy a shot in the arm by sending Ganbaatar home to Ulan Bator with total winnings, including his first-prize money, of $130,000.