When Moscow last saw this show a few years ago it was relatively small, at least in temporal terms. But Boris Yukhananov doesn't know or do "small." It's not in his nature.

"Sverliitsy/Drillalians" — you'll need an explanation whether your language is Russian, English or both — began as a single overture in 2012 performed in Moscow's Artplay space. Actually, it was half an overture, but that's how Yukhananov works, always looking to make the most of what he has.

That modest production was huge in size and ambition, but short in performance time at a little over an hour. Yukhananov now, however, is hitting his stride. You can multiply that by six times or more.

The work Yukhananov is unveiling now through the first week in July at the Stanislavsky Electrotheater is exponentially more. It has grown into a so-called "serial opera" of six parts that runs over five days. It is comprised of music written by six contemporary composers and begins — please note I say "begins," because there is much more planned — to narrate the myth of a civilization called Drillalia, whose rituals and reason for being are bound up in the object of the "sweet, swirling Drill."

Drillalia, the land of the Drill, is inhabited by numerous races, and its people throughout history have traveled to and from Earth through "breaches in the heath," leaving signs of genius behind, while opening up their own world to destruction.

As Yukhananov's poetic, sometimes bracingly dense, libretto puts it, Drillalia "perished in the past, is perishing at this moment, and will continue to perish in the future."

If that all sounds arcane, run this little test. Call up in your memory a really bad week. Or year. Then consider this snippet from "Sverliitsy/Drillalians":

You live, drilling yourself,
Not planning
To drill —
Aye, but there's the risk
That all of us run,
Who slip into Earth's bowels… 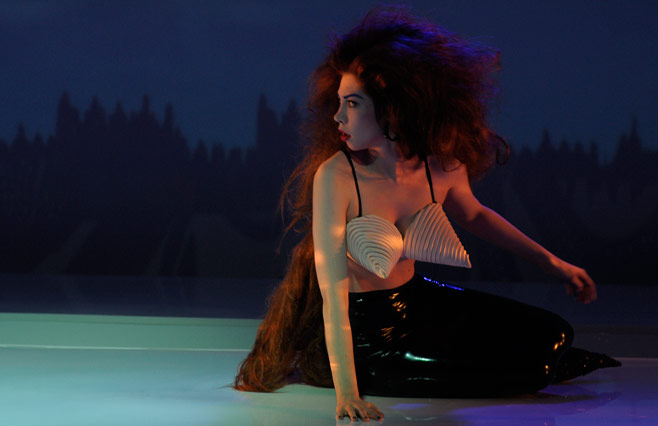 "Sverliitsy/Drillalians" brings theatergoers to the mystical land of Drill.

This seems the proper time for me to disclose the fact that I translated Yukhananov's libretto into English. That allows me to make two brief statements: 1) If you're inclined to doubt my impartiality, please do, and 2) If you attend "Sverliitsy/Drillalians" you will find the entire text is provided in English supertitles.

Yukhananov officially calls his work a "romance-opera," but in casual speech he calls it "comics." He sees a future for the piece as a Hollywood blockbuster or graphic novel. It is, after all, filled with Lords and heirs-to-thrones and villains and subterfuge.

But it is also a philosophical tract (at one point he takes Ludwig Wittgenstein to task for misunderstanding the nature of silence), a mock ethnographical study, a child's fairy tale, and, at times, a bit of a political satire.

All of this is set to music by some of the top young Russian composers working today — Dmitry Kurlyandsky, Boris Filanovsky, Alexei Syumak, Sergei Nevsky, Vladimir Rannev and Alexei Sysoyev. Each episode sounds and looks quite different from the rest.

Kurlyandsky's Episode One is a feast of paradise-like sounds, representations of birds and zephyrs and burbling waters in Venice-like canals. Rannev's final episode pulls out all the stops, playing with volumes not common in this kind of music.

Before rehearsing Rannev's segment recently, conductor Filipp Chizhevsky appealed to his musicians before raising his baton: "Do you remember the words I used? 'Through the roof!' Beat with all your might!"

Yukhananov, who continues his efforts to reimagine the former Stanislavsky Drama Theater, sees "Sverliitsy/Drillalians" as both a leap into the future and a reverent return to the past.

"With our big project," he told me during a break in rehearsals, "we basically are attempting to bring to fruition what Konstantin Stanislavsky wanted to do when he founded this theater. He said he wanted to do it, but he never had a chance to. We are wedding drama and music in a way that creates a new, synthetic theater. We are taking Stanislavsky's impulse and we are developing it."

If that's true, this is Stanislavsky like no one ever imagined.