If you thought St. Petersburg was the only place to head for a long weekend, let me say just one word: Voronezh.

It's not that I'm so smart and have all the answers to all the questions. I have lived in Moscow for 27 years and I just made the 515 kilometer trek to Voronezh for the first time. How's that for ignorance?

A pair of six-hour, daytime train rides got me there and back with such ease and comfort you can bet I'll be on that run again.

Voronezh gave us the great writers Ivan Bunin and Andrei Platonov. It once sheltered the remarkable poet Osip Mandelstam. The renowned actress Vera Komissarzhevskaya performed here during a pass through town in 1903, but the city remembers her so vividly it named a street after her.

And how about Mikhail Lermontov?

There is a plaque on the city's lovely central post office reminding everyone entering that the famous poet stopped by on unspecified business a couple of times between 1837 and 1841. Sending postcards home to Mom, perhaps?

But, for all its well-preserved history and architecture, Voronezh is by no means a city with its head buried in the past. There are many reasons for that, although today we focus on one, the Voronezh Chamber Theater.

Originally founded by Mikhail Bychkov in 1993, the Chamber Theater's name has long been a trademark of excellence. Its shows are frequent participants in the Golden Mask Festival, and its artists have walked away with several awards.

This year Bychkov received a Golden Mask for his production of "City Day," a verbatim project that used interviews with city residents to build a performance that looks at the bright and dark sides of life in the city.

But that pales in comparison to another event occurring this season — the unveiling of the theater's spectacular new home in the center of the city.

Built of brick, glass, metal and hardwood oak in just 14 months, and coming in under budget, it was first opened to the public in September with a preview of scenes from Bychkov's latest production, Alexander Pushkin's "Boris Godunov." This show eventually premiered in April, by which time operations were in full swing.

I wouldn't be surprised to see "Godunov" among next year's Golden Mask nominees. It is a bold, highly theatrical take on the classic play that neither fears to tinker actively with Pushkin's canonical text, nor to draw uncomfortable parallels between Russia's political past and present. 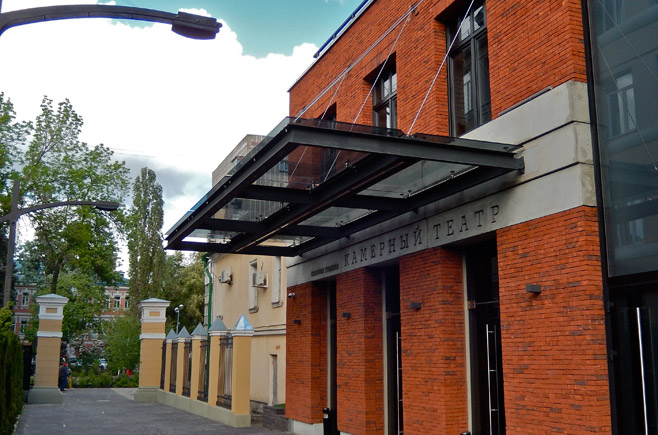 This, perhaps, makes perfect sense when one considers Voronezh's role in Russian history.

The city was a stronghold of support for the False Dmitry against Godunov in particular, and Moscow in general, during the so-called Time of Troubles in the early 17th century, which provided the material for the play Pushkin wrote in 1825.

History and politics aside, however, Voronezh is very much a modern metropolis.

In less than one season, the Chamber Theater has become one of the most innovative cultural centers in Voronezh. Aside from its repertoire of 13 shows playing on two stages, it hosts lectures, literary readings, formal meetings with actors, film screenings, art exhibits, festivals and more.

The venue is a wonder of contemporary architecture whose abundance of mirrors, glass and cleverly lit space gives it a sparkling, warm, welcoming and aesthetically pleasing demeanor. The entire five-story structure, including a basement floor housing an art gallery, book store, library, lounge and cafe, is centered around a huge open space that allows visitors on the second floor to glimpse what people are up to on the basement level.

I can't think of a single Moscow venue that can compete with the beauty, comfort and usability of this impressive space.

Even now as the theater is offering up two shows alongside two or three other events every day, it is gearing up for the annual Platonov Festival of Arts. Opening June 3, it runs through June 14 at the Chamber Theater and other stages in Voronezh, featuring a packed schedule of drama, music and dance from around Russia and Europe.

The festival honors native son Platonov, whose works form the foundation for four of the dramatic productions on tap. But it also offers works by Gogol, Ibsen and Brecht by such directors as Lev Dodin, Philippe Genty, Yury Butusov and Vladimir Pankov.

All aboard for Voronezh!

See platonovfest.com for details of the Platonov Festival of Arts. For more information on the Voronezh Chamber Theater, see chambervrn.ru.