Contribute Today
By Maria Evdokimova
May 27, 2015

Models from across Russia will gather in the Moscow suburb of Zavidovo to compete in a beauty pageant featuring contestants of all shapes and sizes.

The contest, called "Enviable Beauties" as the town's name translates as an "enviable" place, is being promoted as the only one of its kind where women with "classical" 90-60-90 measurements compete against plus-size models.

"For the first time in Russia we have a unique beauty contest that welcomes standard and plus-size models to compete as equals," pageant director Olga Moiseyenko told The Moscow Times in a phone interview. "The fashion world is finally getting ready to accept the beauty of the human body in all its forms. The aim of our battle of models is to show that beauty doesn't depend on size and weight: via our pageant the 'big' girls will prove that they are just as beautiful and unique as the skinny ones."

Moiseyenko has her own fashion house, which focuses on clothes for the woman not built like a model.

"This will be a totally new experience for me," said a 90-60-90 model Masha Amirova, who made the final. "The pageant's format offers a perfect way to display the variety of beauty. Such events help women love themselves as they are."

Hundreds of applications were sent in from all across Russia, Belarus, the United States, Britain and even Morocco.

"We've received 10 times more applications from plus-size models than from regular ones, and this fact proves that the borders of the modeling industry are becoming more flexible," said Moiseyenko. "Just a few years ago, it was almost impossible for a girl of non-standard measurements to make it into a beauty pageant." 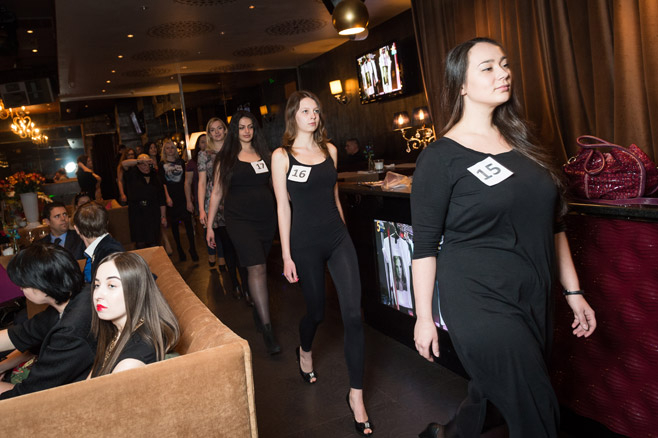 Models of different sizes parade before judges in a joint catwalk during pageant's castings.

"I really liked the 'mission' of the contest," said plus-size model Elvira Ishmuratova. "I've always been against the borders imposed by fashion. I'm strong for naturalness and femininity."

The contest has not just been on the catwalk and photo shoots. In preparation for the final, models had helicopter flight training, went yachting and had golf lessons.

And one of the final rounds took place in Tunisia where organizers looked for local talent to take part in the competition.

The winner will represent Russia at Fashion Week in Rome this October, Moiseyenko said.