Contribute Today
By The Moscow Times
May 7, 2015

Frequently obscene and ferociously critical of the Kremlin, @Igor_Sechin is among a handful of popular Russian-language Twitter parody accounts based on personas and institutions in the Russian government.

Here's a look at five of the best, which have collectively garnered more than 1.5 million followers.

Translation: "Everything that belongs to Putin belongs to the people. Or the other way around. I can't remember."

The masterminds of the account, Moscow-based public relations specialists Katya Romanovskaya and Arseny Bobrovsky, initially remained anonymous but revealed their identities in a 2013 interview with GQ's Russian edition.

The parody feed has become an institution in the liberal-leaning Russian online community, with more than 1.24 million followers.

Featuring the visage of Russian foreign minister Sergei Lavrov, this account jibes at Russian officials with a mix of satire and outrage over bureaucratic incompetence.

The name is a reference to the Russian-language acronym for Russia's foreign ministry, MID RF, and like @KermlinRussia, it often plays on the pretence of being an official mouthpiece for the government.

The feed has gathered more than 88,000 followers since its launch in October 2012. 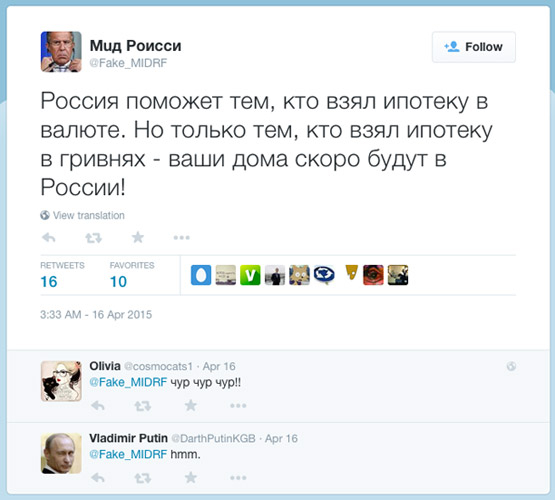 This account, under the name Peskov's Mustache, is a reference to Putin's longtime spokesman, the urbane and mustachioed Dmitry Peskov.

The tweets rely more on wry barbs than overt denunciations of Russian officials. The person behind the account, which has 84,000 followers, rarely breaks from the satirical premise that it is actually Peskov composing the tweets.

Translation: "Vladimir Putin: Russia will go all the way to defend my interests."

It would be difficult to believe that this account, which was blocked in Russia this week, is actually maintained by the Rosneft chief and Kremlin insider. Aside from the fact that Sechin is not known to have any sort of social media presence, the person behind the account is relentless in pillorying Sechin's good friend Putin.

Translation: "Recently, I physically can't watch anything with Putin. His mendacious and cocky mug makes me ill."

In a recent write-up of the controversy over @Igor_Sechin, a Russian website quoted the regulator's spokesman, Vadim Ampelonsky, as saying that the feed had been blocked based on a complaint that it violated privacy laws.

But critics say this is not a credible explanation. "Twitter's terms of service require parody accounts to identify themselves clearly, so readers don't mistake these accounts for the real thing," wrote the news site Meduza. "If the fake Sechin account violated this policy, however, it would have been suspended from Twitter worldwide, rather than blocked in a single country."

No other Russian-language Twitter parody account has spawned as much confusion and speculation about the author's identity as this one, purporting to convey the musings of Vladislav Surkov, a top Kremlin adviser seen as the architect of Putin's political system.

With some 114,000 followers, whoever is behind the account sticks closely to the Kremlin line when commenting on Russian domestic and international affairs, lending an air of credibility to the possibility that Surkov himself is involved.

Both The Washington Post and The Moscow Times have quoted — and then retracted or deleted— comments from the @SurkovRussia account, as if they came from the official himself.

Surkov has denied having any social-media presence, though he has said that he is familiar with the account, calling the tweets "witty" and "humorous".

"But they're not mine," he said in 2013. "I don't have any blogs in social media. None. This is rather unusual for these times, but that's how it is."

Translation: "More than anything I despise people who change their faith, last name, nationality. There are no 'bad' nations or last names, only stupid people who bear them."