Approximately once every two summers, ever since its inaugural outing in the shaky, post-Perestroika year of 1992, the International Chekhov Theater Festival has brought the world of theater to Moscow.

The first of this year's offerings — Denis Podalydes' production of Moliere's comedy "The Bourgeois Gentleman" for the Theatre des Bouffes du Nord — opens Wednesday and runs for four consecutive nights at the Mossoviet Theater.

The last, running at the same venue from July 13 to 17, will be one of the festival's most-awaited entries — Luc Bondy's staging of Pierre de Marivaux's "False Confessions" for the Odeon Theater of Europe, which stars the great Isabelle Huppert.

By the time the festival closes with the final of these five performances,19 productions originating in 13 countries will have passed through town. And that is just counting the main program.

A parallel set of productions titled the Moscow program will tack on an additional 14 performances running from Wednesday to July 13. Considering political and social trends of late, this program is of no little interest.

These days, the swatting of a fly can take on political connotations, and so I may be stretching things just a bit, but I see in the Moscow program a concerted effort to claim a place for Russian theater in the European family. The entire program consists of Moscow productions created by foreigners working in the Russian capital.

Thus does the Chekhov Festival take a stance in ongoing debates about whether Russia is a culture distinct of Europe and the rest of world, or whether it belongs to a common, international cultural space.

Yes, the festival states in no uncertain terms that Russian culture is part and parcel of trends and aspirations the world over.

The Moscow program features productions staged by directors and choreographers from France, Lithuania, Latvia, Germany, Moldova, Britain and Greece. They include some of the top names in world theater, including Pascal Rambert, Peter Stein, Declan Donnellan, John Neumeier and Theodoros Terzopoulos. All of these shows run in repertory in such Moscow venues as the Bolshoi Theater, the Pushkin Theater, the Chekhov Moscow Art Theater and the new Stanislavsky Electrotheater.

Some of the foreigners have called Moscow home for years — including Rimas Tuminas, who runs the Vakhtangov Theater, and Mindaugas Karbauskis, who is artistic director of the Mayakovsky Theater. Both of these directors studied at Moscow theater institutes.

But it is the main program that rightfully receives the most attention. Some shows play as little as twice, so it is advised that you not procrastinate in purchasing tickets.

Gone in this year's configuration are the week or even 10-day residencies that the festival occasionally hosted in the past. The longest stay of any theater this summer will be five days, although in the case of Emmanuel Demarcy-Mota's "Ionesco. Suite" and Suzanne Andrade's "Golem," there will be seven performances over a five-day period.

"Ionesco. Suite," an adaptation of works by the great playwright Eugene Ionesco, runs June 17 to 21 at the Meyerhold Center, with day and evening performances June 20 and 21.

"Golem," a fantastical and atmospheric modern take on the old Jewish myth, performs June 23 to 27 at the Mayakovsky, including day and evening performances on the 26th and 27th.

France plays a leading role in the offerings, with five shows in the main program and five more in the Moscow program. French productions occupy the prestigious position of both opening and closing the festival.

Podalydes' "The Bourgeois Gentleman" would appear to present a rich combination of two iconic French styles of theater — satire and classicism, although the critic for Le Figaro called it a "baroque rather than a classical staging." 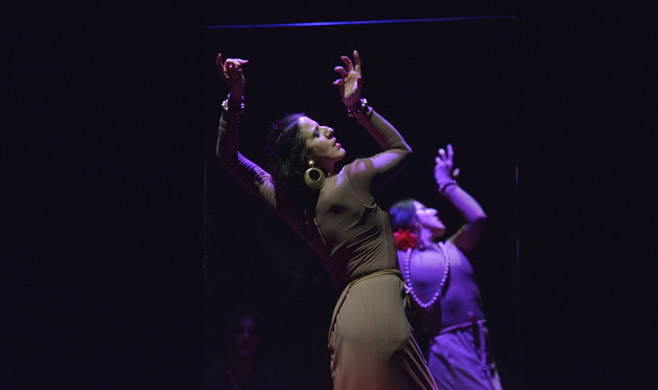 "It lacks any academism," the reviewer went on. "In a sense it could be called a popular theatre but there is no vulgarity in it."

Philippe Genty and Mary Underwood's production of "Forget Me Not" for the Philippe Genty Company will surely be a highlight. Genty and Underwood create visually gorgeous and stimulating dance works that seem to come directly out of a rich world of dreams. They show their work May 23 to 26 at the Mossoviet Theater.

In fact, dance productions make up a large percentage of the productions gathered for this showcase. All are performed at the Mossoviet.

The Tango Metropolis Dance Company of Argentina presents "Tango and Night" from May 18 to 21. Conceived and executed by Pilar Alvarez, Claudio Hoffmann and Marijo Alvarez, it includes music by a large number of popular composers, Astor Piazzola, Kurt Weill and Chick Corea among them.

"I, Carmen," choreographed by Maria Pages of the Maria Pages Company of Spain, will put forth a new interpretation of the famous character from May 28 to June 1.

"I don't agree with the traditional interpretation of the image of Carmen, who was invented by men to give expression to their passions," Pages states in a snippet of an interview published on the Chekhov Festival website. "For many years the imbalance has not been overcome in society, where there is no real equality between man and woman."

Thieree, who is Charlie Chaplin's grandson, has enjoyed enormous success at past Chekhov Festivals with his sweeping, visually striking productions that mix theater, dance, circus and cinema.

The Rambert Company and Royal Ballet of London, employing music by the great South African band Ladysmith Black Mambazo, take over the stage at the Mossoviet from June 10 to 14 for "Inala, a Zulu Ballet."

"Life in Progress," a production of Sadler's Wells of London, is an evening of short, energetic ballets danced by the famed Sylvie Guillem, who has chosen this production to end her 39-year dance career. Including pieces choreographed by Akhram Kann, Matts Ek, Russell Maliphant and William Forsythe, it plays June 23 to 25.

Other dance, or dance-inspired, productions include "Rice" by the Cloud Gate Dance Theater of Taiwan from June 17 to 20, and "Cinderella" by the Nuremberg Ballet from July 6 to 9.

A Russian-based piece produced, in part, by the Edinburgh Festival, occupies the second slot in the festival schedule.

Vladimir Pankov and his SounDrama Studio put together this piece culled from works by Richard Aldington, Homer and Nikolai Gumilyov last summer for performances in Britain. Its May 18 and 19 performances at the Pushkin Theater will be the first held in Moscow.

The International Chekhov Theater Festival is hosted by various venues from Wednesday to July 17. Most evening shows begin at 7 p.m., day performances begin at 1 p.m. Non-dance shows are performed in original languages with translations into Russian provided by way of surtitles. Information and tickets are available at the festival center, located at 21/1 Leontyevsky Pereulok. Metro Pushkinskaya. Tel. 495-223-96-50/51. chekhovfest.ru.