Maurice Maeterlinck's "The Blue Bird" is one of the most iconic plays in Russian theater lore. It was first staged in 1908 by Konstantin Stanislavsky, and, believe it or not, a direct descendant of that production still plays today at the Gorky Moscow Art Theater.

Yes, it takes the same characters, brother Tyltyl and sister Mytyl, and sends them on a wending journey in search of the blue bird of happiness. From time to time, it brings them into contact with fairies, relatives, animals and various objects and elements such as milk, fire, water and sugar.

But most of the similarities end there. This piece, the third at the entirely reinvented Stanislavsky Electrotheater, and the first created by artistic director Yukhananov, is a Statement with a capital "S."

It is, as you guessed, a fairy tale and Yukhananov throws himself and his enormous cast into the genre with a burning passion. In all, this production runs more than 11 hours over a three-day period. Part One, titled "The Journey," runs nearly five hours; Part Two, "Night," runs four and a half; Part Three, "Bliss," clocks in at a swift two plus change.

Taking the notion of a journey seriously, designer Yury Kharikov squeezed a section of a real airliner onto the stage. Tyltyl and Mytyl begin by sitting in the upper deck and reminiscing — about their parents, their lives, their dreams.

But there is much more to the space than that. At times it becomes an underwater kingdom filled with fish. It catches fire. It is frozen in ice. It is transformed into Red Square and a circus ring.

This is, if you will, a memory play. But the memories are those of the actual performers performing the roles.

In many cases, since the 10-year-old Tyltyl is played by veteran actor Vladimir Korenev, famed for all times for his performance in the cult 1962 Soviet film "The Amphibian Man," those memories are shared by most everyone in the audience. 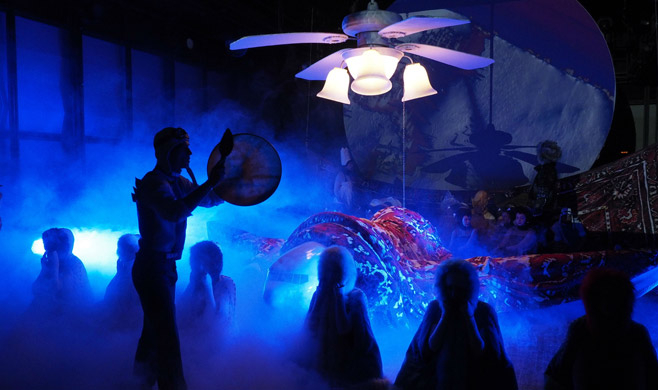 "The Blue Bird" is in three parts and together lasts almost eleven hours.

In an age of social strife, political hostility and deep discord among theater professionals, Yukhananov takes on the Utopian task of unearthing the sources of peace and harmony and bringing together performers and spectators on common ground. What theater production hasn't dreamed of working a miracle like that?

Yukhananov creates two entry points into the land of memory. One is the personal memories of the actors about their families and childhood. The other is the history of the theater itself.

Korenev and his wife Aleftina Konstantinova have toiled at the Stanislavsky for over half a century. Yukhananov uses their memories to resurrect the theater's past — great backstage stories of famed actors and directors such as Yevgeny Urbansky, Yevgeny Leonov, Mikhail Yanshin, Boris Lvov-Anokhin and many more. It is a moving and fascinating ritual of reverence offered to the past before the present and future take the theater in a new direction.

Korenev, playing the 10 year-old Tyltyl, and Konstantinova, as the six year-old Mytyl, often wear pajamas as children might. They whisper in conspiratorial tones, like any children hiding from their parents would. This creates an atmosphere of intimacy and confidentiality that constantly draws spectators into the world of the work.

Yukhananov, however, hardly scorned the aspects of spectacle, which are inherent in the play and are characteristic of his work in general. On the contrary, quiet moments shared among characters are repeatedly interrupted by dazzling scenes of song, dance, film and acrobatics. This production moves forward in waves of introspection and extravagant action.

"The Blue Bird" is so constructed that each night's performance can be appreciated independently of the other parts. Each has its own unique journey.

With this show Yukhananov makes two bold statements. One is to declare he is ready and able to reach deep into the past for inspiration. The other is that the past cannot hold him. This is a good recipe for a playhouse that is in the process of reinventing itself.