It costs $50 million or more to go up into space as a tourist like singer Sarah Brightman, but if you don't have that kind of money you can now at least try the food they eat in space.

To mark Cosmonautics Day, a vending machine is now up in the Cosmos pavilion at VDNKh, which allows you to buy space food.

VDNKh visitors have the chance to try a three-course Cosmonaut dinner — the starter is borshch, schchi or rassolnik — which have all been freeze-dried and then squeezed magically into a tube. Second course is lamb or pork and then comes dessert: cottage cheese with different fruit purees, apricot, blackberry or sea buckthorn. Each of the tubes costs 300 rubles.

The food is produced by Space Food Laboratory, which boasts it uses the same technology used for the Soviet space industry and a space food pioneers as a consultant.

"This sort of space food was constantly used by Soviet astronauts", said Yury Cherkasov, development director at Space Food Laboratory. "There are strict regulations on what can be added to the food. No conservatives, no coloring, no additives. In short, it is incredibly natural food."

"Astronauts needed food that could be kept for months on end without going off," said Andrei Vedernikov, general director of the company. The tubes last up to 18 months, he said.

"We want to preserve the Soviet process of making space food" said Cherkasov. "The aim of the company is to show and educate people about the Soviet space program."

The laboratory has big plans, aiming to have five vending machines up in the Cosmos pavilion and tens more in the Moscow planetarium and museums linked to space. 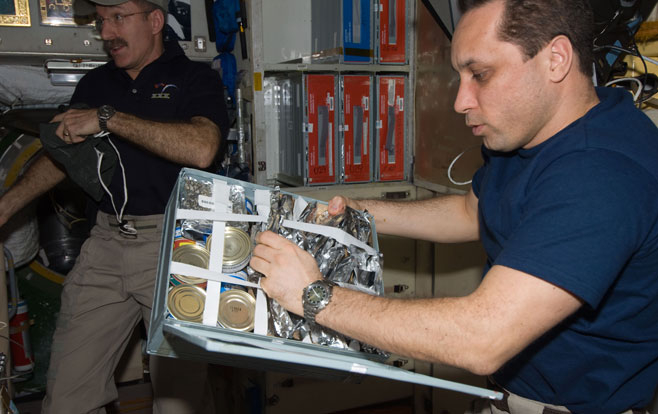 Russian cosmonaut Anton Shkaplerov chooses some food on the International Space Station in 2012.

Vedernikov has big plans, saying the vending machines could go in duty free zones, be used in extreme sports and eventually go abroad, asking one British correspondent from The Moscow Times about which national dishes taste good in a tube.

Food in a tube is sadly not cutting space food technology anymore. It was once regularly used by Soviet cosmonauts but these days it is only used for condiments like mustard.

Still, it does make a great gift for space fans or those who like their food in tubes.

Marianna Hunt contributed to this story.