Full-figured women will strut the catwalk and show that big is beautiful this Saturday at the Plus Size Fashion Weekend in Kuzminki park.

Organizers sent a call out for models earlier this year with the requisite that they had to be size 48 or bigger. The models who were eventually chosen will show off top fashion wear in sizes 48 to 58 (American sizes 14 to 24, British sizes 16 to 26).

Natalya Markova, one of the models who signed up, said she was fed up with how the fashion industry ignored the larger woman. "I felt that the assumptions about us were untrue and I wanted to show that beauty does not depend on size and that all women have the right to look beautiful," she said. Markova got involved last year when the event made its debut in Russia, in St. Petersburg.

The event is sponsored by the mobile phone messaging feature Viber Public Chats. The "Plus Size Chat" has 57,000 subscribers across Russia, said Yelena Grachyova, one of the event organizers, and helped the fashion weekend get lots of applicants to be models.

"We wanted to use ordinary girls and show that each of us is a model," said Grachyova. "We want to have an event every season, as is done generally in the fashion industry."

Apart from the catwalk, the weekend will see fashion workshops, a live DJ set and a chance to be recruited as a plus-size model.

The average size for a woman in Russia is size 52, which is also the American average. However, it is rare to see a model of that size and almost as hard to find such a size on the high street.

"Shopping in Russia for plus-size clothing is a nightmare!" said Markova, who used to be size 52 but is now size 48. "It is hard to find good quality and nice clothing in size 52. Young women can't find nice clothes in bigger sizes, only clothes for old women." 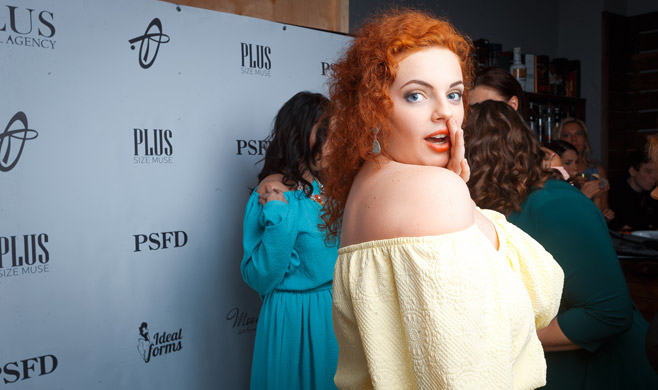 Clothes in shops like H&M and Marks & Spencer do reach size 52, but the choice and quality on offer is still not enough for the fashion-conscious shopper, she said. High-end fashion is even more difficult, with designers often reluctant to produce clothes in sizes bigger than 46.

Pop culture at one time idolized curvaceous Marilyn Monroe, but somewhere along the line waif-like figures such as Kate Moss and Keira Knightley took over in the West. Skinny was not always fashionable in Russia either, said Markova, blaming European designers for having a detrimental effect after the fall of the Soviet Union.

Not that the choice in the Soviet Union was great, either. "We are seeing a change now for the better, but it is not enough," said Grachyova, "It is the right time to have these sorts of events to catch the attention of the public and to create links with Russian designers."

The plus-size movement has made many gains and staged numerous shows in the West. Grachyova said she hopes to collaborate with these fashion movements.

Is there a limit to how plus a plus-size can be? Sizes at the show do not go beyond 58, said Grachyova, but it is possible to find clothes in size 68 in the shops. Any larger, she said, is difficult to get.

Ultimately, for Markova, it's not about size but beauty: "Women of all sizes should be valued. Beauty is an inner condition that affects the way a woman carries herself."