A few days after the world premiere at the Berlin International Film Festival, three of the stars of Disney's "Cinderella" headed to Moscow for the first Russian showing.

Director Kenneth Branagh, who was on Moscow screens last year as a Russian gangster in "Jack Ryan: Shadow Recruit," joined Richard Madden (Robb Stark from "Game of Thrones") who plays Prince Charming to Lily James (better known as Lady Rose in "Downton Abbey"), who is slumming it as Cinderella.

The three were met by swathes of teenage girls who gathered outside the "Moskva" movie theater, in the shopping center next to the newly opened Hotel Moskva, before the premiere Monday.

They were not there to see the great Shakespearean, Kenneth Branagh, nor the new live-action adaptation of the Disney classic, which the Hollywood Reporter wrote features "a heroine right out of the pages of a traditional storybook, who gradually reveals the qualities of a self-possessed modern girl."

In fact, none of them had tickets. Instead they were excitedly talking among themselves while repeatedly swooning at the thought of just catching a mere glimpse of their king, rather than prince, the blue-eyed "Game of Thrones" heartthrob Richard Madden. 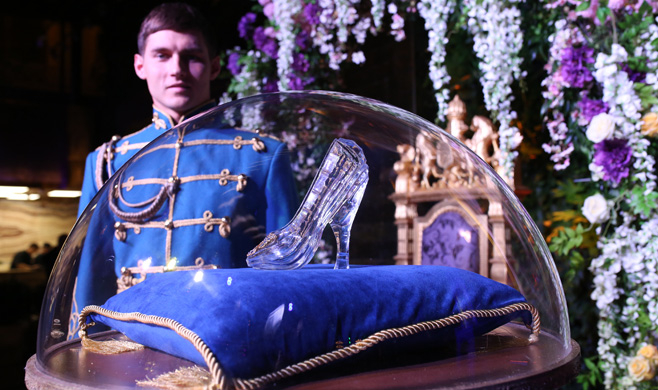 A glass shoe on show that is not very good for Moscow streets in February.

"We want to see the film [but] Richard Madden is the reason we are here," said 17-year-old Polina, who didn't give her last name as she was swept away by a horde of teenagers on the hunt for Madden.

As a television journalist came toward the crowd, one girl rushed to the front and brought out a drawing she had done of the star that she hoped he would autograph. Adding to the general frenzy were chants of "We love you Richard!" shouted toward the still-empty red carpet.

Madden played Robb Stark, the King in the North, in "Game of Thrones" and his series departure — spoiler alert — was one of the most surprising in the blood-soaked fantasy series. Stark was killed along with his pregnant wife and mother in the now infamous "Red Wedding" episode.

"'Game of Thrones' is definitely the favorite TV show among Russian teenagers," said Nastya, who didn't want to give her last name as her mother didn't know where she was. "I think there's going to be a big crowd here tonight but I hope Richard Madden waves at me."

Madden appeared Tuesday with his co-stars at a news conference, where, thanks to the fact that Disney does not let teenage fans in, he and Lily James talked more of "Cinderella" than "Game of Thrones" or "Downton Abbey."

Nevertheless, Madden did note that it was nice to be in a role where he wasn't "brutally killed off." 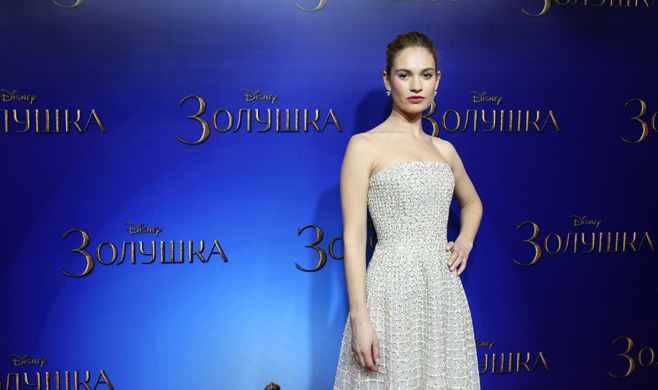 Lily James is Cinderella in the film.

The new version of Cinderella is being hailed as a reworking of the fairy tale, as Cinderella doesn't just wait around for her prince to come and is supposed to be a strong female role model.

"There is a historical imbalance of how films have tended to follow the stories of men. I realized we could revolutionize the story and turn it around from the inside," said Branagh. "The aim is to empower Cinderella, to show her strength through kindness, to be sincere without being sappy, to be strong without being cruel or violent. I want Cinderella to be powerful through her femininity, there is no need to pick up a gun and pretend to be a man. Cinderella's message is to be female and complimentarily strong."

Madden, meanwhile, was playing Prince Charming in real life when asked how a woman should be treated.

"I think you need to be a gentleman the whole time, you have to respect a woman and take her exactly as she comes. Men should always try to be true gentlemen," said Madden. His character Robb Stark dumped his fiancee in "Game of Thrones" because she was ugly.

A Scandinavian cyclone transformed the capital into a winter wonderland.
not mainstream music

Russia's music scene is not resting on its historical laurels.