A row of projectors beams out images of a ruined factory and workers amid piles of rubble. Clanging, metallic music rings out.

Visitors to the Brothers Lumiere Center of Photography, located in another former factory, the Red October of chocolate fame, can get a glimpse of the last of the ZiL car plant in a multimedia installation. Photographs by the installation’s creator, Svyatoslav Ponomaryov, were taken between 2013 and 2014 at the now-shuttered ZiL.

In the neighboring room, Natalia Ponomaryova and Yekaterina Zuyeva have curated PROzavod, an exhibition of 20th-century industrial photography. Photos date back to the 1920s, including work by Boris Ignatovich, the Soviet avant-garde photographer who worked closely with Alexander Rodchenko.

Ignatovich is famous for his experiments with perspective, which can be seen in “Factory” (1929), where the camera looks up at a chimney stack, with innumerable pipes, railings and wires forming a cross-hatch of diagonals between lens and sky. His “At One Of The Moscow Bicycle Factory Workshops” shows machinery from above, with the factory floor just out of focus. The scale is ambiguous enough for the machine to resemble an entire factory, momentarily transforming every screw into a chimney stack in the viewer’s imagination.

“When I first had the idea, people thought this kind of exhibition wouldn’t be relevant to today’s world,” said co-curator Ponomaryova, “But [Svyatoslav Ponomaryov’s installation] was the spark that inspired me to realize the project. His work showed me that actually, people are interested in this piece of their history.”

Images of factories give way to portraits of workers from the 1930s. Mark Markov-Grinberg’s 1933 miner series captures Nikita Izotov, who was often referred to as the “First Stakhanovite,” looking proudly into the distance, his face black with soot.

These images spread westward and Izotov became a poster child for the Soviet Union, with his portrait featured in French, German and Belgian leftist publications.

The exhibit is full of striking images, whether they seem to fit into the Soviet cult of the factory or not. In Vladimir Boidanov’s 1975 “At the end of a shift,” a row of young factory workers walk down two train tracks together, with the factory looming behind them. They are mid-conversation, some looking ahead, a few turned towards one other, arms slung over shoulders. 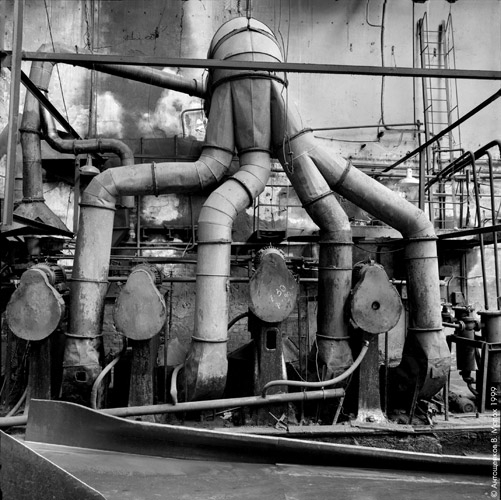 Factory machinery that looks more beast than machine in a 1999 photo.

In another shot, four men sit in the shade, visibly relaxed, surrounded by flowers. The sepia tones and the date — simply ‘1960s’ — looks more fitting to the era of hippy flower power in the United States. Behind them, though, rises the Orenburg gas processing plant, resolutely grey against the sun-drenched flowers, and the viewer is brought back to the Soviet Union with a bump.

Later photos cast a more critical eye on industry. One wall of the exhibition is devoted entirely to the work of Triva, a group of workers who sought to accurately document life in the massive Novokuznetsk iron and steel plant in the ’70s and ’80s.

Triva was composed of workers, rather than state photographers, and so its members enjoyed unmitigated access to the everyday reality of the plant. Their photos capture a range of moods, and often seem mundane compared to the glorification of labor seen in previous decades.

In Vladimir Vorobyov’s “Making a Broom” (1980), a man looks questioningly at the camera as he sits on the ground gathering twigs, with no machinery in sight. In Vladimir Zharov’s photo series “Manufacturing” (1988-9), a blurred woman hurries to work, her face neutral, with the words “The Glory of Labour” emblazoned behind her.

Vladimir Sokolayev, a member of Triva, has spoken of how the group’s quest for authenticity influenced the form of their photographs: “In order to emphasize the completeness of our documenting technique, we began to do full negative prints, including the perforations. Soon we got rid of the perforations, because it seemed “too artistic,” but we’ve kept full-negative printing ever since.”

Denis Tarasov’s striking project “Uralmash” (2009) offers some respite from the gray geometry which dominates the exhibition. In 1929, the taiga around Yekaterinburg was cleared to make way for Uralmash, a giant Soviet car plant. In 1989, Gennady Vlasov decorated the plant’s metal cupboards with colorful images of traditional Russian life, so rusty machinery stands alongside a painting of a peasant girl collecting water, surrounded by birds.

Tarasov’s photographs of the murals in the now-defunct factory demonstrate the circularity of the plant’s history, “Most of Uralmash’s workshops are now silent and peaceful, as it once was in the pine forest which stood on the same spot,” he is quoted as saying at the exhibit.