The fifth and last day of Exhibit B, a controversial work that aims to look at slavery and racism, and that was canceled in London after protests that it was itself racist, takes place Tuesday at the Museum of Modern Art's Gogolevsky Bulvar venue.

Curated by South African artist Brett Bailey, the work uses people in a series of installations that re-create the "human zoos" popular in Europe in the 19th century where African slaves were shown to paying visitors.

These tableaus, though, focus on the reality that colonialism brought. A woman sits in chains, a man holds a basket full of cutoff hands, and four decapitated heads sing a song to visitors.

"I wanted to create images where you are seduced by beauty — you want to look — but the content is so horrific you also don't want to look," Bailey said in an interview quoted by the BBC.

Visitors travel through the different tableaus in 20-minute slots before coming to a room full of photos of the men and woman they have just seen and a request to write their impressions. "Some quietly cry at the end," said Veronika Kandaurova, a museum spokesperson.

The men and women in the exhibit are a mix of people with African origins. A number have been recruited from Russia specially for the event.

Daniel Odoukoure from the Ivory Coast says in words on the exhibit wall that he came to Russia to escape war and famine in the Ivory Coast but found "an even bigger suffering than in my continent — racism."

"I have been a victim of racism. They call me monkey and say that I do not have a place in their country, that my place is in Africa, which they call a jungle."

"They humiliate me everywhere. They look at me as if I am an animal because I am a colored man."

"When I went out it was only God that protected me from racism," Adler Bessalah wrote about living in Russia in the 1990s. "Recently it became better. But all these years I loved Russia and Russian, and I always knew that it was not because of them."

All of the participants have African origins apart from Ilkhamzan Abdukakharov, a Central Asian migrant who has his own tale of racism. 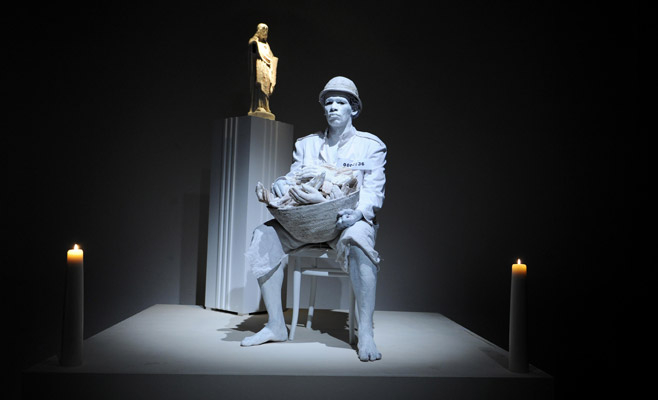 Exhibit B was canceled at the Barbican Center in London after protests.

"In 2007, my cousin came to Russia to work. Within a year he was killed in Moscow. A group of young men attacked him. They beat him and stabbed him with a knife," he says in words on the exhibit wall. "He was a victim of racism. … He was really a peaceful man. He had three kids. He died with a dream that was not realized."

In the final room of the exhibit, visitors are asked to write their impressions.

"Much of it shocks, but probably that is the only way to reach the modern person," one visitor wrote.

Another took the chance to say that there are always two sides to the situation and that there is often disrespect from some nations to other cultures.

The exhibit received rave reviews — "disturbing," "essential" — when it was shown at the Edinburgh festival last summer, but when it moved to the Barbican Center in London in September, it met with huge opposition. More than 20,000 people signed a petition that called the exhibit "complicit racism" and held protests outside the venue before its opening.

The center canceled the exhibit, telling The Guardian that "it became impossible for us to continue with the show because of the extreme nature of the protest and the serious threat to the safety of performers, audiences and staff."

"'Exhibit B' raises, in a serious and responsible manner, issues about racism. It has previously been shown in 12 cities, involved 150 performers and been seen by around 25,000 people with the responses from participants, audiences and critics alike being overwhelmingly positive."

Russian reaction has been calmer. Vedomosti newspaper wrote that the exhibit provokes "shock and shame."

Exhibit participant Nana Sarpong says in words shown in the final hall that "it is important not to look away. In order to turn the negative to the positive we have to be willing and able to look the negative right in the eye, to see ourselves in the mirror and heal ourselves."