The Yekaterinburg Theater of Opera and Ballet took a bold step in opening its 103rd season last month with a production of contemporary American composer Philip Glass's opera "Satyagraha." And to start off, I will simply say that what the theater came up with struck me as among the very best of all I have seen and heard in nearly a quarter-century of attending operas in Russia.

"Satyagraha" brings to the stage episodes from the life of Mohandas (Mahatma) Gandhi during his years in South Africa in the late 19th and early 20th centuries and is the second of the composer's trio of operas written between 1979 and 1983 and concerned with "men who changed the world." First and probably best known in the series was "Einstein on the Beach," while following "Satyagraha" came "Akhnaten," based on the life and religious convictions of the 14th-century B.C. Egyptian pharaoh known by that name.

Taken from the ancient Indian Sanskrit language, "Satyagraha" can perhaps best be translated as "firmness in the pursuit of truth" and was the term applied by Gandhi to his belief in nonviolent confrontation in the face of oppression and injustice. Over its span of more than three hours, Philip Glass's opera repeatedly brought home the continuing relevance of that belief to the events of today's world. (Whether intended as such or not, it seemed a fine bit of irony to find President Vladimir Putin conspicuously quoted in the Yekaterinburg program booklet as saying, "Since the death of Mahatma Gandhi, I've had nobody to talk to," juxtaposed with the words of Gandhi himself: "Truth is my God. I can find him through nonviolence and in no other way.")

"Satyagraha" has many unique features. There is no plot in the usual sense, but instead a series of key episodes in Gandhi's evolution from conventional lawyer to champion of nonviolence as a political tool to confront South Africa's oppressive racial laws. The text contains no dialogue, but is entirely made up of meditations taken from the Hindu book of scripture Bhagavad Gita and is sung in the original Sanskrit. Each of the opera's three acts brings to the fore a historical figure who hovers in silent commentary: Leo Tolstoy, whose writings greatly influenced Gandhi; Indian poet, novelist and music composer Rabindranath Tagore, who admired Gandhi, but often disagreed with him; and Martin Luther King, who adopted Gandhi's philosophy of nonviolence.

This may not sound like the stuff of which opera is made. But it works nevertheless. The Yekaterinburg production turned the opera into an enthralling spectacle from beginning to end. Rarely indeed, in my experience, have the diverse elements of opera — vocal soloists, chorus, orchestra, staging, decor, lighting and costumes — been brought together in such near-perfect unity. 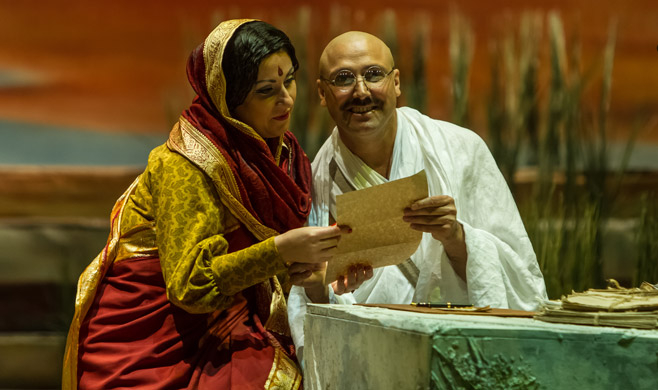 At the time when Glass wrote "Satyagraha," he was regarded as a "minimalist," achieving his musical effects through the pulsating repetition of tiny series of notes. The theater's orchestra, led by Slovak conductor Oliver von Dohnanyi, dealt with the music in splendid fashion, bringing it vividly to life with subtle changes of tempo and coloring.

The opera's vocal writing is partly declamatory and partly made up of soaring and often extraordinarily beautiful lyric passages.

Soloists at the premiere of "Satyagraha" were drawn entirely from the Yekaterinburg theater's own roster of singers and all proved more than adequate in their respective roles. Special mention, however, needs to be made of tenor Vladimir Cheberyak, who brought to the long and arduous role of Gandhi a voice of clarity and strength, as well as acting of exceptional sensitivity. Not only that, but he also managed to create at least the illusion of a figure who bore an uncanny resemblance to the great man himself, as seen in photographs and on film.

The chorus sang with true splendor, particularly in the overwhelming conclusion to the opera's final scene.

Staging "Satyagraha" and also providing the decor was American director Thaddeus Strassberger. The action on stage was choreographed with enormous skill and moved seamlessly between the real and the imagined. And to that, Strassberger added decor of considerable beauty that seemed to arise organically from the action and the music, as well as work in perfect harmony with the sophisticated lighting designed by Moscow-based Yevgeny Vinogradov. The costumes of American Mattie Ulrich were particularly notable for their strict adherence to period design and their remarkably sensitive choice of colors.

It seems an almost sure bet that "Satyagraha" will be seen in Moscow as a Golden Mask nominee in spring 2016. Meanwhile, the opera is due to appear in Yekaterinburg on a fairly regular basis.