BUDAPEST, Hungary — The crowds at Budapest's Sziget festival are a mix of many nations — Hungarian, Belgian, Dutch, French, British — but when Leningrad, the bad boys of Russian rock, comes out to play, they mosh and scream words that can't be printed here even if they are mangled by foreign accents.

Led by the charismatic, always outspoken frontman Sergei Shnurov, Leningrad is a regular at this summer festival with the band's alcohol-fused mix of ska and punk rock.

Sziget strives to be an "island of freedom," a city within a city where people from all parts of Europe and the world come together and politics supposedly do not matter.

But before the show, tensions are running high as visitors holding up Ukrainian flags and chanting nationalistic slogans edge closer to those holding up Russian flags.

But as soon as Shnurov and company take to the stage, politics are brushed aside. The audience is united in one goal.

"I guess this is probably our eighth time at this festival," Shnurov said in an interview with The Moscow Times after the show.

"Here you get to see all kinds of music, ranging from Caribbean to the latest in electronica. There's a very wide spectrum and outlook here," he said. "In my opinion, it's the most correct festival. Here it's not about the genre, here it's about the message."

Nevertheless, Shnurov still thinks about the situation in Ukraine. The "world has gone insane," especially when it comes to the sanctions against Russia, he said.

"There is no one who's guilty or innocent — everyone's guilty. But what I want most of all is that all this won't end in war. In all this, I share Soldier Svejk's position."

Czech author Jaroslav Hasek deals with the futility of war in his book "The Good Soldier Svejk," where the title character foils the military with what is either insolence or stupidity.

"Politics are a murky thing. What the audience sees or reads in the news is probably about 5 percent of what is really happening," Shnurov said.

His St. Petersburg restaurant, Cococo, which specializes in Russian cuisine, will not be affected by the ban on European and U.S. food products. 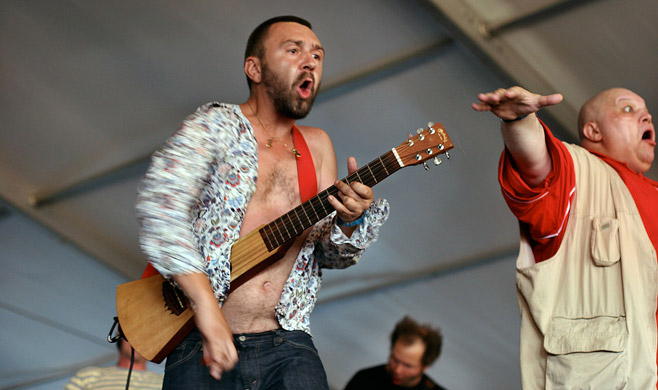 Frontman Sergei Shnurov says he's not afraid of fines for cursing on stage.

"But those most affected as a result of these political games will be the ordinary people in Europe and in Russia. It's always like this," Shnurov said.

"For now we can't talk about any serious suffering. So what if you can't buy a tomato? That's not a serious problem. I just don't want it to come to real suffering."

Still, it is not only international relations issues that concern Leningrad. As of July 1, Russia has banned swearing in public performances, which for anyone who knows the band's songs understands that it is like banning the word "love" for The Beatles.

Movies containing expletives in Russia now won't be shown on television or get widespread release in theaters. DVDs, CDs and books must come sealed and labeled as obscene if they contain swear words.

In response, Leningrad recorded a song called "Fiasco" in which the swearwords they traditionally use are replaced by their academic counterparts to emphasize that although expletives are no longer allowed, there are plenty of other words that carry the same meaning.

However, Shnurov is not planning on changing the lyrics of the other Leningrad songs.

"For some reason everyone interprets it as a ban. It's not a ban. The only thing that comes with it are fines, and I'm ready to pay them. … No one's going to get sent to Siberia for cursing," he said.

"Whoever is more scared will keep quiet, but those who are more brave will keep doing what they're doing."

The group, he said, will continue as usual with plans to release an album in the fall, although there are no plans for a full tour in support of the album.

"We just drink far too much during our concerts, so we cannot last a whole tour."

Would the band play in Crimea if asked?