If you have a spare couple of thousand euros, then the Central Manezh Exhibition Hall could be the place this weekend for you to start your contemporary art exhibit. That is the hope of the organizers of Cosmoscow, a slick art fair that aims to inspire a new generation of collectors.

Those with no spare cash can spend a few hundred rubles to get access to walk around the fair, which runs till Sunday and has 26 galleries from Russia and all over the world offering works up for sale. If you have a couple of million euros, you can limit yourself to one artwork.

"They love art, and they treat it like babies. They tell me 'I don't want to have my breakfast without a Cecily Brown,'" said collector and curator Olga Vashchilina, referring to the British artist whose work is in the Guggenheim Museum and the Tate Gallery.

There is only one Cecily Brown on show at the fair as part of Collector's Eye, a look inside private collections to inspire people to become collectors. It was unsure if it was the same Brown that the collector likes to look at over the most important meal of the day.

Ninety percent of collectors are men in Russia, Vashchilina said. "When they first started, they, of course, decided to buy classical art. [It's] very simple: still life, flowers or something like Russian avant-garde."

"What we see now is their ability to mix, as everyone does in the international community," said Sandra Nedvetskaia, co-director of Cosmoscow and former International Head of Christie's Russia and CIS. "You can mix different art from different periods, and we see this is starting to happen."

"I take a huge pleasure when the adults educate the kids [in contemporary art]. Even if the kids say we don't want to," Vashchilina said. "[The parents say] the Pushkin Museum is beautiful, classical art is great, but we need to go further we need to be now, to exist now and this is amazing."

Part of the fair's aim is to educate those who know little about contemporary art and a trip to the fair, if you are suspicious like those collector's kids of anything that would not work in the Pushkin, is a whirlwind tour of the contemporary art world.

How about photos of Russians by the beach by a veteran beach photographer, or a pastiche of a stained glass window by the Recycle art group populated with characters from South Park and called "Who Killed Kenny"? And then there is Yekaterinburg art group "Where Are the Dogs Running," which has put a mouse in a maze and a screen where you can see the mouse meet his various virtual selves.

It's about the "victory of the animal over a cruel system," said group member Olga Inozemtseva as she stood by the maze with a keyboard in hand. As the mouse scratched itself, a journalist cooed "Ah, what a cutie." 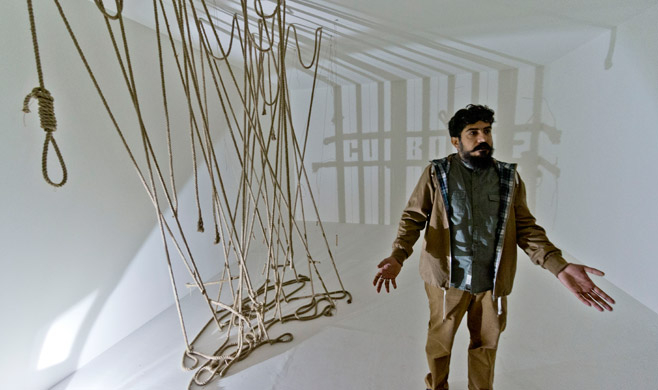 The fair has an education program too, said Nedvetskaia, but "it's much bigger work than just a few days of the fair. It's a long-term project."

When asked about the effect of Western sanctions against Russia on the fair, organizers were quick to say that it had no effect. "Art creates dialogue, it transcends any other questions, and it allows you to communicate," Nedvetskaia said.

Some of that communication it seems is about Ukraine. The Frolov gallery is displaying a large painting showing a woman in an old fashioned swimsuit with swim cap diving from a cliff in Crimea with the famous landmark, the Swallow's Nest castle in the background. It looks Soviet but was painted this year.

The Artsvit gallery from Dnepropetrovsk in Ukraine is showing one Ukrainian artist's reaction to the war in his country. A fighter holds a gun in one colorful sketch, rockets fire into air near a rocket launcher, a man in a black mask points a gun at a civilian in a doorway.

The artist Nikita Shalenny was working on a different project for the gallery when he told the gallery's chief curator Mariya Shaluiev: "I can not work on this projects, these just come out of me," she said

"It is a message of peace to the rest of the world," said Shaluiev, adding that Shalenny wanted to show a view from inside the conflict.

Empty ammunition boxes are set up in the space with some art work laid in them.

The outside of the galley's stand has the words "Earth Peace" and "y.o. 2014" written underneath on a white wall. Artist Yoko One gave the gallery permission to use her work and the gallery will hand out printed copies of what is on the wall at the fair, she said.

There were no art shoppers at Manezh on Thursday just press and lots of security guards in black suits, two of whom were divided on the work on show. Not bad," said one young man. "I like the one of my colleague over there," referring to Semyon Faibisovich stylized art that shows two security guards having a cigarette by a Lada.

His nearest colleague was less enamored, saying it all meant nothing to him.