A young woman attempting to pull out a tablecloth from a dining table, littering the floor with broken tableware in the process, a naked and blindfolded lady guided by a remote-controlled tank mounted on her head wandering the gallery and the students of Strelka Institute performing an interpretive dance based on behavioral data gathered in a Moscow suburb were just some scenes at the Garage Museum for Contemporary Culture at the opening of "Do It" over the Labor Day holidays.

The , located in Gorky Park, is hosting the latest — and to date largest in terms of the number of collaborators involved — iteration of the ever-evolving exhibit that has been ongoing since it was conceived by art historian and curator Hans-Ulrich Obrist in 1993.

Instead of artworks, the exhibit puts on display artists' instructions, which other artists and the public interpret and perform, thus redefining the audience's relationship with the artist and their artwork.

Artists for a long time have grappled with what happens to a work of art and its meaning if they let go of authorship or if somebody else executes their work, the role of chance and how people's participation change works of art. One of the inspirations behind "Do It" was Yoko Ono's 1964 exhibition in the form of a book, "Grapefruit," in which event scores replaced physical works of art.

"What we are trying to say with this show is that there are a multitude of ways to participate in contemporary art and that a complex and beautiful idea can be interpreted in a variety of ways — this is also what artists are also curious about," said Snezhana Krasteva, one of the co-curators of the exhibition.

Erwin Wurm's instructions invited the audience to step into over-sized pullovers and get into poses to become living sculptures, while Anibal Lopez's asked the audience to rent for $20 per day a painting that would then be given to another artist to fund a new work — these are among the 80 sets of instructions on display, which also includes about 10 new works made by Russian artists. 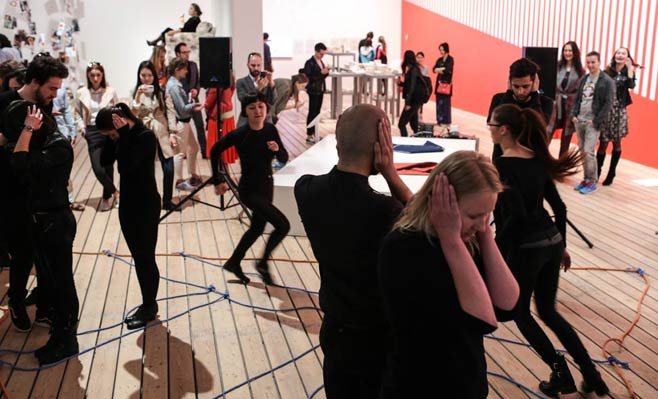 The wide variety of performances, installations and activities spread out in the exhibit makes for a hectic scene.

"Do It" is an exhibition in progress: "It is always your first time. That is what's so great about it. I think an integral part of 'Do It' is this idea of interpretation. Even if you have seen the John Chamberlain three times, it is a different John Chamberlain. It is a different context, it is used differently. It is understood differently to the people around you," said Renaud Proch, director of the New York-based Independent Curators International, which has been involved with "Do It" since 1997 and developed the exhibit together with Garage.

The spontaneous performances of instructions on display at the exhibit also recalled the "happenings" — a performance, event or situation considered to be art, often involving the participation of the audience — of Allan Kaprow, Fluxus and other conceptual artists of the 1960s.

"Museums are not just repositories of an experience, they try to become creators of this experience. So it is not only about looking at art that is important, but also to create an environment where people can meet, discuss ideas and participate," said Krasteva, talking of how "Do It" furthers Garage's mission to involve local communities and broaden participation in art, with Garage also collaborating with a number of other institutions for this exhibit.

"Yesterday I was shocked. There was just an outburst of desire to participate. People literally went mad," said Krasteva, reflecting on the scenes at the exhibit's opening. "People have always thought of art to be something 'untouchable' but this shows that they have been waiting for something like this to happen," she adds.

While the answers have been changing over time, the questions that are raised by "Do It" and its new, open type of exhibition model feel strangely relevant to this digital and information age.

"Do It" runs until July 6 at the Garage Museum for Contemporary Culture, 9 Ulitsa Krymsky Val. For the full program of live events throughout the exhibit, please visit garageccc.com.

The director spoke about her film, her mentors and her Caucasus.
TOKYO OLYMPICS

Glorious charred beets and vegetables with creamy cheese will keep everyone happy at the grill.